If You Took A Left Turn at the Cotton Candy Stand... 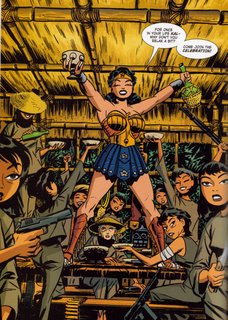 Well, today I was following the Lea Hernandez controversy in the interest of adding to the collection of "portrayal of women in comics" posts Kalinara and I have been amassing (I myself have little to add to the conversation except I just did a post on Kyle Rayner's hindquarters and I'm still creeped out by that bit of script she found) when I found myself at the Carnival of Feminists.

And I don't just mean that I ended up there. I actually found myself listed in the Carnival of Feminists for my "Wonder Woman Should Be Tall" post. I'm honored and just a tiny bit embarassed by some of my rowdier content.

So, if you're here by way of the Carnival, please, don't feel unwelcome by the geeky atmosphere. I understand we're a wierd little community with many strange customs and an unfortunate stereotype to outsiders. We're not much used to company ourselves. But check around, you may find yourself interested in the posts about Persephone below, Marionette's views on Violence, James and Ronee's speculations on catering to female readers, Kalinara's pet peeve, Melchior's observation on females in 60s comics, and various other thoughts about female characters. Aside from that, I think nearly all of the female bloggers are in Group One on the sidebar (Comic Treadmill has a few more), but the males are respective and in some cases more likely to discuss feminist issues.
Posted by Ragnell at 1:15 AM