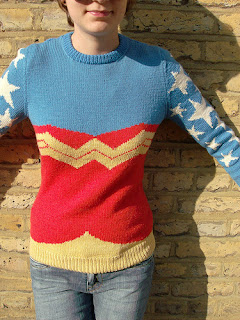 Isn't that awesome? The blogger who made it has a few more pictures up.

For anyone living in the Oklahoma City area

Atomik Pop is having an anniversary sale this weekend. 50% off back issues and buy one get one half off for trades and toys. I don't remember the manga, anime and Hello Kitty deals, but at least everyone's reduced by 10% if someone's looking to save a little money in OKC.
Posted by Ragnell at 10:54 PM No comments:

Hey, everyone. I already spoke about those who seem to feel the changes in Amazons Attack were permanent.

Now I speak to two other camps.

First, to those of you who feel the changes are "permanent" because they are now in continuity, let me remind you -- so is Diana working at Taco Whiz, Hippolyta being Hercules' battered wife, Artemis as Wonder Woman, and Hippolyta arranging for Artemis' death. None of that killed Wonder Woman.

Second, to those who think that Amazons Attack is ruined because of simply how awful the story was, I just want you to know that you made me laugh. Do you know why? Because I started reading during John Byrne's Wonder Woman run. I also read through every crappy fill-in storyarc from Perez's reboot to Rucka's series ending.

She survived all that shit, and she survived the horrors of the 70s and the 80s.

Amazons Attack will not kill Wonder Woman.
Posted by Ragnell at 1:07 AM 28 comments:

If you realize what I'm talking about, this post contains Spoilers.

I wanted to not be pissed off in my 800th post (I've been going through my archives, I swear my blood pressure wasn't always in the stratosphere whenever I wrote), but Kalinara just can't keep her links to herself and just had to show me something that pissed me off. She showed me a post which had scanned pages from a book that came out today.

The events in the comic book did not piss me of.

The reaction of the fans did.

I know, I know, I've spent most of my time lately yelling at other fans for one reason or another but seriously, there's a lot of people out there who are annoying the shit out of me and some things need to be said about it. So I'm not going to link the post (so I won't be singling out just one idiot) or name the comic (because that will spoil it), but I am going to say some of the mean things that need to be said to keep my sanity.

I talk a lot about narrative clues and artistic clues, but there's another huge method by which writers communicate their intentions to readers, and that is by using tried and true narrative tropes that some people know as "genre rules."

Serialized superhero comic books are a genre, and most readers are intimately acquainted with the narrative clues, artistic clues, and genre rules for superhero comics and they know when a ending is actually the beginning of another huge storyline.

Despite the fact that it may appear that the character's setting is now in ruins from a "permanent" change, certain clues let you know that this is not the case. The situation is one that the writers realize is a state of ruin, the "permanent" change is anything but, and rebuilding the setting will be a future plotline.

One of those clues, ladies and gentlemen, is when in the last three pages of a storyline a major company-wide villain is revealed to have been disguised as the traditionally benevolent power behind the "permanent" change.

This usually means that the person who appeared to be the benevolent power is lying (lying is something supervillains sometimes do) and that the whole damned point really was to fuck up things for the hero but from and in-story standpoint and not from a meta-standpoint. Now the hero has to fix it.

And if I have to tell you this, you either need to read more serialized superhero comics or stop reading them altogether, because you are doing it wrong.

I didn't know there could be a wrong way to read something you enjoy, but if you are getting an impression that is so far from the traditional intent and the narrative mechanics of serialized superhero comics, something is going wrong between you and the page. As a result of this something wrong, you are going to be unable to enjoy these stories as intended because even when the writers blatantly violate these tropes they are still playing off of the expected result to get the effect they need from the reader for the story to work.

Next time, we'll discuss how when a hero is placed under mind-control and used as a villain in the kickoff issue of a large crossover it usually means he will be rescued and/or save himself from this state by the final issue, and how it is usually not the ruination of the hero unless the writer is playing on narrative tropes to surprise the audience.

Because that's another one a lot of people seem to be missing.
Posted by Ragnell at 3:59 AM 30 comments: 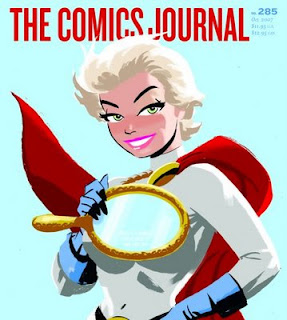 Darwyn Cooke's cover to The Comics Journal, as seen on various blogs yesterday.

I can't believe I didn't do this back in March, actually...

James Nicoll found a blog, and now his readers and the Howling Curmudgeons are discussing Dave Sim's "Fifteen Things."

In the interest of lazy posts I figured this would be a nice time to link my reaction from a few months back when I first read it.

And if that doesn't make anyone smile, here's Dave Sim through the Regenderizer.

We all know Kyle Rayner as the Lord of the Fridge, Collector of Angst and Bringer of Death to Supporting Cast Members. Certainly the young lady in black (or dude on the skis if you so prefer) seems to follow Kyle like a lost puppy. I mean, she's picked up not only every woman the boy takes to bed with him but much of the Silver Age Green Lantern Corps during Kyle's early years. (Seriously, read the first 50 issues of Marz's run on Green Lantern. It was supposed to be all Hal's fault, but really it was everyone Kyle came into contact with who got folded, spindled, and mutilated.) Thing is, there's another trend that popped up toward the end of Winick's run and has stuck with the guy since.

Start with Green Lantern #150 where (along with the battery) he brings the formerly deceased Guardians back to life as children (with little girls too!).

Then look at the Obsidian Age storyline in JLA (JLA #66-76) after that, where he agrees to offer up his heart so that the souls of the rest of the League can be safely housed there for a few thousand years and then be brought back to life.

Then he goes to outer space, and encounters the resurrected and possibly undead Kilowog. Kilowog had been brought back to life by Boodika and several other ex-lanterns in the Last Will and Testament of Hal Jordan (I have no fucking clue what is up with this storyline since Green Lantern 10-13 because this is the storyline where Kilowog came back and where Oa was reconstructed so it can't be totally retconned out, but Boodika can't have been there and she was a major antagonist.) So Kilowog gets collected by the keepers of his people's afterlife because he's from one of those planets where they frown on this sort of thing. Which leads to the bright spot of Raab's run (Green Lantern #169 I believe, but I didn't like Raab's run so I've only read this one a few times) when Kyle literally follows a friend to Hell and physically pulls him back to the land of the living. We can count that.

And then, of course, there's the famous Rebirth storyline where Kyle retrieved the body of Hal Jordan from the sun so that Hal could be brought to life in a storyline involving Ganthet and the Spectre. Since Kyle was pretty damned active in bringing this about, I'd like to count that as well.

Then there's the end of the Ion maxiseries where Kyle brings his mother to life until she tells him that's a bad idea. This one probably only fell through because (unlike everyone else he's seen resurrected) she's a religious civilian woman and not a superhero who has actually spoken to various deities from a number of different cultures. Kind of a different view on the afterlife there. Still, despite being a tap back, this counts.

So, there we have it. Kyle Rayner has either actually performed or facilitated the resurrection of a dead person (or persons) on five different occasions. These aren't deaths that are just retconned away as never having happened. These are people who were in-continuity dead, and the plot was that he went out of his way and brought them back to life.

And, if you take into account that there were 5 dead Leaguers (not counting Kyle) in that JLA story, and the dead Guardians numbered 15, 31, or 35 (Kalinara and I are still arguing this one), that's actually quite a lot of people.

Under 5 different writers come to think of it.

I have no impressive conclusion to this train of thought. Its just one of those things that keeps popping up. Only while I'm absolutely certain they've done the dead girlfriend/relative thing consciously (so that Kyle can angst that he's cursed and be reluctant to grow close to anyone) I don't think they've realized yet that they created a character who raises the dead as a hobby (or that the two trends are intrinsically connected characterization-wise). There would be more in-jokes about it at convention panels I imagine.

But I needed one to illustrate my suggestion because I'm not sure everyone who reads this blog also watches Comedy Central and this guy just looks and sounds perfect.

Who else can see it?

Yeah, that probably says a lot about what I think of Hal.