In case you were curious.

I've had a few comments about it show up, and I keep meaning to make an answer to them but I'm made of procrastination this week. So, to answer some of the comments I've had lately, I thought I'd let you guys know that I'm pretty pro-violence in my comic book reading. I am a Geoff Johns fan.

Nothing too graphic mind you, but I think my line is a little farther than a lot of people's. There's a spread in Powers that grossed me out once. Nothing that's appeared in DC, including the Pantha decapitation (and yes, that includes the rolling -- It reminded me of a Hunter: The Reckoning game I ran once where one of the player characters died of decapitation in a fight scene and another player character picked up her head and used it to bowl for vampires) has really struck me as shocking.

And yeah, I don't mind gruesome deaths because I know I'll really enjoy the creative leaps future writers will need to make to retcon them away. My first big fan obsession was Sherlock Holmes (which, coincidentally, I discovered through a "Classics Illustrated" version of "The Speckled Band" in one of my brother's magazines) so I tend to take fictional death as less of an offense than turning a character evil or crazy or weak or all three.

Just in case you were commenting because you actually wanted my opinion on death by decapitation, people being torn in half, and characters melting to death.

Praise heaven, Supergirl is wearing undershorts beneath her skirt!

Tell me this artist is permanent.
Posted by Ragnell at 3:02 AM 20 comments:

Was there ever anything so beautifully absurd as that series? The real beauty was in the consistent strangeness of the series. They could make anything fit.

Take Ch'p, for example. Here's Ch'p from the regular series: 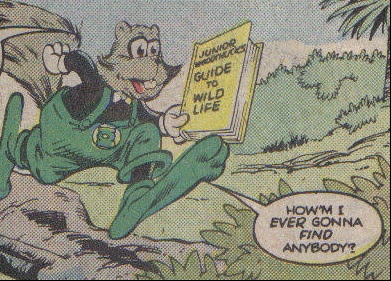 Now, Ch'p was always kind of a Disney reference, and (as above) he'd be oddly cartoonish no matter who was drawing him and he was cute but it seemed to me he didn't fit in the far out space-setting of the Green Lantern Corps. Why not? Because he was too much of an Earth-cultural symbol. This was not only a creature that was native to earth, but personified in a wholly human tradition. He walked out of a human cartoon.

This is a fun idea, I am totally for Ch'p solo stories, but it was different with him in the ensemble cast. See, when it comes to creating a cohesive space opera feel he gets problematic. Ch'p was a character that was out of place in the classic pulp scifi stories that some writers tried to tell. He broke the mood. He took me out of the story. He was too Earthly and too cute to fit. (This happens less often with Arisia, but when you get the wrong artist and characterization, and they overload her with cuteness she can be a bit off in much the same way. Too earthly, too much of a fantasy cultural reference. Just plain not weird enough or grand enough for a sweeping space epic.)

I honestly didn't think Ch'p would work as part of anyone else's story (again, Ch'p-only stories are a different matter), until I saw him in Green Lantern Mosaic #2: 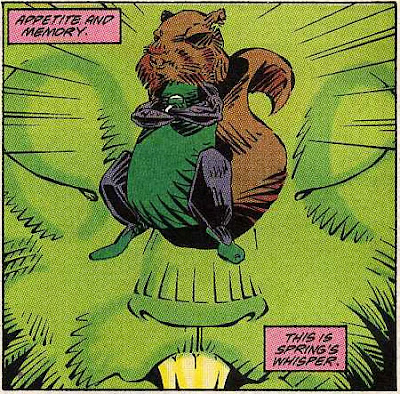 How miraculously appropriate is that panel?

No one has ever managed Ch'p so incredibly absurd and suitably alien as Cully Hamner did in that issue. He fit perfectly into the story without breaking the weight of the tale or bringing the reader too back to human culture, and part of it was just in how he was drawn. That was one freaking weird series that somehow managed to keep a straight face no matter what came into it.

I'm not saying it I suddenly loved Ch'p because Jones and Hamner made him all dark and serious. Yes, they did make him dark and serious, but it was a tongue-in-cheek thing (Think Morrison's Doom Patrol). The series kept a straight face while you giggled not only at the inclusion of Ch'p, but at the mind-dissolving oddness of the entire setting and story and the fact that all of it worked perfectly together!

Honestly, its a shame about that yellow truck (yes, I am totally serious) because Ch'p really worked in that setting without breaking the mood. That's tough with a cute character that's a cultural in-joke.

Of course, that's part of the absurdity, isn't it?

Because I think this is important to realize

Anyway, the blogger has put up a clarification, and chose two comments to answer. I had to say something, again, and I thought I'd put my comment up here for everyone's future reference:

Willow's pretty clearly upset because the problem was so much worse with African-American characters, and there are still unbelievable problems with African-American characters in all forms of media, and your comparison is sweeping that under the rug in favor of supporting your own personal agenda, which is examining gender discrimination. You are putting down her concerns to prop up yours. That is a problem.

Meanwhile, Betty was basically telling you to avoid this comparison, its useless and all it does is set people against each other. With this clarification attempt, you persist with the comparison. Why?

Next time you want to say that gay people have it better in comics than non-white people, or non-white people have it better than women, or women have it better than gay people, just stop. Its not adding anything worthwhile to the conversation, its taking away from the conversation. Its also arrogant as all-hell. You can only speak for yourself, who are you to tell someone else how to prioritize their troubles? What they should be more offended at? Even if you are a lesbian and a registered member of the Kiowa tribe, who are you to declare that "we've come far with race, but moved nowhere on gender" when talking to a Hawaiian woman who is grateful to be alive in this time period but can't manage to get away from the casual racism that invades her life?

Its all wrong, and there's more than enough of it for all of us to worry about anyway.

And stop wasting energy arguing about where everyone should direct their energy. I'm all for absurdity in an entertainment setting, but that's getting old on the level of people commenting on blogs about how blogging is a waste of time.

(Yes, seriously, a positive post! On this blog! Take that, Sims!)

By now you all know I'm more into "posts of passion" than premeditated theme days, so I normally don't participate in stuff like this. Still, I have a very happy start to this week and I figured I'd share it.

I expressed my usual enthusiastic adoration for Pat Gleason and got this comment yesterday:

thought Id clear it up
that is Katma Tui
actually Dave asked for a shot of it on the first panel where we see natu being introduced, but it was so far back I never got to do a nice close up, so i thought it would have a good impact there in that panel.
oh..and I love you too.

You have to love a fandom where most of the professionals are so down-to-Earth and part of the community that they'll just show up on your blog and comment.

Where: True Confessions of an Hourly Bookseller
When: August 16th
Deadline for Submissions: August 13th
Contact: QMickle[at]gmail[dot]com or submission form

Notice: Accepting Volunteers to Host the 17th Carnival. Email Ragnellthefoul[at]hotmail[dot]com if interested.
Posted by Ragnell at 3:52 AM No comments:

Okay, by now we should all know what crazy wonderful writer has been assigned to DC's Final Crisis crossover, its time to place your bets.

So, given the reign of the entire DC universe for one crossover, what is Grant Morrison most likely to do with them?
Posted by Ragnell at 5:04 AM 21 comments: