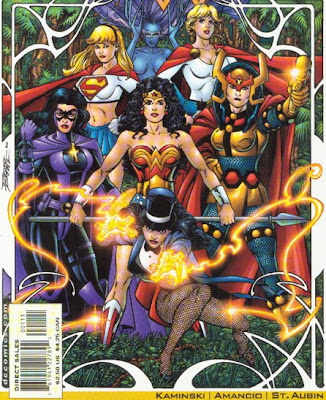 I'll be at Wiscon. I've never been there before. I'm imagining tables of women in Star Trek uniforms (from various series) debating the lack of female mad scientists in popular culture. We'll see how close that idea comes.

(I cut off the title to that cover to drive certain readers insane. Don't give it away in the comments.)
Posted by Ragnell at 3:21 AM 19 comments:

I'm going to weigh in on this one before I go on vacation, because there's something important about this (NSFW) cover that I'm not seeing mentioned in the posts.

Look at Black Cat, she's hiding rather than unconscious (see how her left eye is shut?). She's huddled and trying to shrink away from the tentacle. Very vulnerable, very scared, and she's the one with the goo on her chest.

What pisses me off more than anything else (more than the breasts, the tentacles, the for the boys mentality, the blatant disregard of their own rating system) is when you see that, and take this retcon into account.

And fuck you, Marvel Comics.
Posted by Ragnell at 3:05 AM 13 comments:

Heroine Content (http://www.heroinecontent.net) is hosting the 13th
Carnival of Feminist Science Fiction and Fantasy Fans, which will be
published on May 30th. The deadline for submissions is May 27th!
Please submit via email to skyekilaen@gmail.com. We're looking for
posts, web comics, and art with a feminist perspective on science
fiction and fantasy. This can include TV, Movies, Books, Comics,
Games, etc. For more information, see the Guidelines at
http://carnival.feministsf.net/?cat=3

Also check out the new People of Colour SF Carnival
(http://ofcolour.blogspot.com/). The first edition is scheduled for
June 15th, see their site for more details.
Posted by Ragnell at 3:11 PM No comments:

I don't know how I missed this last month, but in accordance with DC tradition Soranik Natu (Kali and I have been calling her Nikki between ourselves) has finally gotten a butt-showcasing cover all her very own. 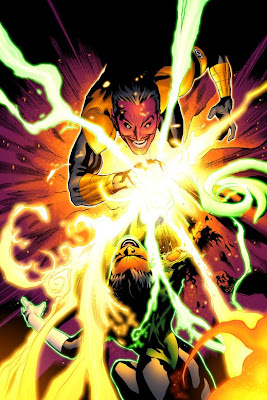 The artist has the concept sketches posted on his blog.
Posted by Ragnell at 5:13 AM 5 comments:

Because of the current raging controversy I did something unusual and checked out the figures section of the DC solicits. I found something I have to buy. 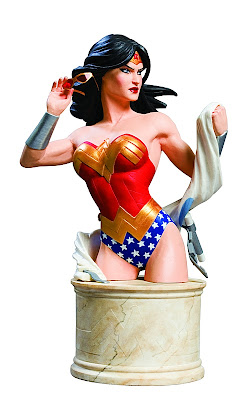 I want them to make more like this.
Posted by Ragnell at 2:13 AM 19 comments:

2) Time travel storylines, guest-starring the Legion of Superheroes from any publishing period.

3) Any version of Starman, because of the intricate history James Robinson set up.

4) That every Flash who has ever been published can team up to fight a single villain.

5) Power Girl's playful banter with Wildcat reminds me of me and the guys at work.

8) The core team of the JSA is essentially a bunch of cranky old men who probably get together with old supervillains to play poker.

10) John Stewart's first appearance when he steps in between the cops and the checker-playing kids.

12) I've been following these characters long enough to be able to fill in the spaces between the panels.

13) Quicksilver is an absolute jerk when he's good. He can also believably go insane and evil and I still adore the character.

15) Somewhere in the Multiverse there is an Earth controlled by Nazi Dinosaurs.

16) Multi-part serial stories which give me something to think about as I do mindless repetitive tasks.

17) Green Lantern's powers have as much visual potential as an illusionist, but all entirely in my favorite color.

20) Big Barda is the muscular ass-kicker in the Free family, and Scott isn't the least bit bothered by this.

21) A large percentage of the male population of Opal City wear fedoras.

22) Black Canary was still a hero when she lost her powers.

23) Manhunter is divorced. She is not a castrating bitch. Her husband is not deadbeat Dad. They are two decent people who couldn't make it work out, and there was no need to make anyone the villain to make the other look better.

24) The original Red Tornado was just a lady with a pot over her head and a blanket-cape, even came from a humor book, but in the modern DCU she's known as a hero and her flashback stories drive that home.

26) "When I'm no longer needed to battle crime and injustice" is a better answer to "When will you marry me?" than "When Hell freezes over"

27) It is almost completely random, yet very funny, that panels featuring Green Lantern are usually a rear-view.

28) Whatever damage is done by the current writer can be fixed by the next writer's retcon, reboot, or just plain redemptive writing.

29) That even the tropes I despise are so well-known that we have a staple of jokes to make when we see them. (Yes, I love Fridge jokes. Surely you all knew that)

32) Mutants like Domino, Longshot, and Scarlet Witch, who have vague probability powers that conform to the writer's needs.

33) Shining Knight is a teenaged girl with a sword, gold armor, an Arthurian history, and a flying horse!

34) The cover to Defenders #5 has a giant monster holding a blonde woman in his hand just like King Kong -- only this woman is swinging a sword at the monster! (And she's a valkyrie!)

35) Wonder Woman killed Medusa on live television, while she was wide awake. Touch that, Perseus!

36) Lois Lane is a driven, pushy, arrogant, complaining, sneaky modern career woman. As a result, she gets to see Superman with his briefs off on a regular basis.

38) All Brainiacs are pretty much dicks, whatever time period and moral alignment they show up in.

40) No knockoff can hold up to the original Superman.

41) You can make an easy Jack Knight costume for any convention with a pair of boxers, a Hawaiian shirt, a leather jacket, ski goggles, and a broomstick that's been spray-painted gold.

42) The industry pros are part of the fandom.

43) The creepy visual effect of shadow powers when the Shade, Obsidian, or Nightshade show up.

44) That Blink was so popular after Age of Apocalypse she was the anchor for a new series.

45) Kyle Rayner, in the alley, with the lead pipe.

46) Everything is just so much bigger in the DC and Marvel Universes. The stakes are higher for everything. Aliens invade every week. The End of the World is nigh every month. People don't just have fist-fights, they have aerial battles over the mountains while the government calls out the Air Force to take out the winner.

47) At the same time, there's street heroes who handle normal crime and everyday accidents. They interact with the cosmic-level heroes and team-up.

49) "You made me lose my hair!" was not the motivation for a female villain.

50) The story where Power Girl lifts up an Arthurian-era knight and throws him into a lake after he tries to run off with her per the laws of Chivalry? Collected in trade now.
Posted by Ragnell at 2:28 AM 10 comments:

I'll hold your cape for you.

As long as I'm on statues showcasing domesticated women I have one more thing to get off my chest. (Others have pointed this out, but I still need to say it.) This whole MJ thing reminded me of this: 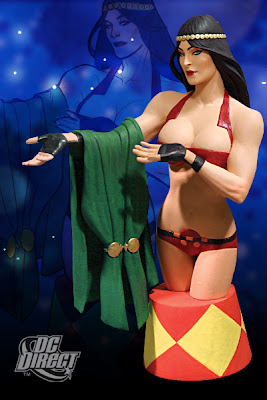 That one pisses me off more than any of the others, and its not the outfit. Kirby designed that outfit. Didn't bug me when he drew it. Its the pose. Do you know what would have been a better pose for Barda in that statue?

When Kirby drew Barda in that outfit she was doing strength exercises, lifting heavy things, and discussing the plot and battle plans with Scott. Here Barda is holding Scott's cape for him. Effectively the little woman is holding her husband's coat while he goes off to actually do stuff. It's Big Barda for heaven's sake. She should be kicking something's ass in any statue.

"Honey, here's your cape. Now go out and save the world without me."

"I'll hold your coat while you fight him, darling. Good luck."

Seriously, does that fucking sound like the quintessential Big Barda moment to you?

Yeesh, what is wrong with these licensing people?
Posted by Ragnell at 3:26 AM 10 comments:

About that hamper distinction.

I swore I'd do that 50 Things meme Kalinara set up, but before I do I just have to ask about the hamper thing in the MJ discussion.

We've established that yes it is a hamper rather than a washtub. That still means this statue shows Mary Jane doing Peter's laundry. How exactly does that invalidate all the complaints that she's doing menial housework chores for her husband? Does this even count as a Bad Reasons fallacy? The basic premise is still true, a slight detail was mistaken.
Posted by Ragnell at 3:12 AM 7 comments:

Posted by Ragnell at 1:58 AM No comments:

I totally missed it, but Dirk Deppey got the first 1984 Reference in the MJ debate:

Today’s When Fangirls Attack! link is a choice between your Scott Kurtz Two-Minute Hate and your Dirk Deppey Two-Minute Hate. Fun for the whole family!

Does anyone else think these are beating out the Hitler references on internet debate these days?