Why This Is Notable.

Not that I'm above beating a dead horse but I really wasn't going to bother with this Wizard thing again.

Except for the large amount of people who don't seem to understand why Wizard magazine feeling comfortable enough to brand itself on the cover specifically as a "Men's Pop Culture Magazine" should piss anyone off.

For those of you shrugging your shoulders, I'd like to bring two comments to your attention.

What I am concerned about is Wizard-the-organiser-of-Cons. I’m not sure how separate the two are, but is this attitude going to be translated to the various Wizard-Worlds? Are women going to be explicitly unwelcome there too? God knows Cons can be iffy places for women at the best of times, but if the Wizard Worlds are emblazoned with the “Number 1 Men’s pop-culture convention!” banner, that’s going to exacerbate a lot of problems.

Floundering though they are, they still set a lot of the tone of the industry.

Personally, I haven't spent money on Wizard in over three years, but the easiest major convention for me to attend is one of theirs.

As a person who no longer reads the magazine it doesn't really bug me, but as a regular convention-goer I'm a bit out of sorts here.

Second, Rachel in her livejournal:

It's relevant because it's visible, and because it markets itself as the comics magazine. Also, it owns a huge number of other comics periodicals and many major conventions.

So the fact that it's now advertising itself as a men's magazine says a good deal about its attitude toward women in comics and sets the tone for a LOT of affiliated industry coverage and events.

As Rachel says, they are visible and for years they have been the superhero fandom magazine. Its a little irksome that they don't feel they have to even pay lip service to potential female readers.

Dumb as the magazine is, insignificant that this blurb may be, you can't blame people for being pretty pissed. Its more of the "girls don't like superheroes" shit and I know I'm not the only one sick of hearing and reading that idiocy.

Okay, its not much of a mystery why Wizard is declaring themselves a men's mag now, but there was enough room to wonder just what they were thinking.

Cheryl Lynn has the missing piece of the puzzle:

And why the hell did Wizard reps approach female fans and ask them to fill out surveys at conventions this summer? Why ask us to participate and then slam the door in our faces?

Its not hard to arrive at a working hypothesis here: Sales were falling. They needed a way to bring them up. They could expand beyond comics or try to capture more of the comics-buying community. They explored the option of opening to a wider comics-reading audience and surveyed female convention-goers.

They looked at the results of the surveys and realized they would need to change things they didn't wish to. Maybe they were just too chickenshit to risk a change, or had no faith that the male audience would be willing to read news and views without round shiny breasts next to every paragraph, or maybe they just didn't care enough to make the effort.

So they went and decided to go beyond the comics-reading community to pander to the lowest common (male) denominator everywhere so they wouldn't have to be a magazine for everyone who reads comics. Just men who have interest in comics-related things.

Which is their prerogative. From a business sense, it'll probably work. The less insular they are to the comics community, the better they'll do overall.

I'm not mad, though. I haven't read them since High School. Fuck 'em. We have Comic Foundry as a print magazine for everyone. We have online sources for news. We have blogs for commentary.

With any luck, this means in a few years we'll be rid of them. They'll have to do more movies and television to appeal to a wider base. The comics content won't be so central to the magazine anymore. The companies will have to put more into the other sources, just for lack of room.

Its just so depressing that right now DC and Marvel are taking their big news to an officially gendered source -- and they are still, we all know they are and will for a long time to come. Wizard'll still be considered the major industry mag for too damned long yet.

Sadly, I have work tonight and couldn't get the night off.

For a seasonal post, see Chris Sims. (I wouldn't read that at work, though.)

I can't fake surprise at this blurb... 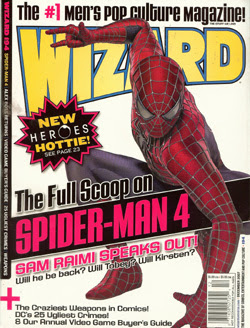 I just can't tell if this is an attempt to "diversify" the magazine by going beyond comics to general "men's interest" or if they figure this will make the female fans not bother to criticize them anymore.

Probably a combination of both, judging by Haenhle's exploration of the interior.

Draw Your Own Conclusions

Way to show everyone how dedicated you are to "telling good stories regardless of gender", Warner Bros.

So I just saw a commercial for Beowulf.

Now, I had to double-check the website to make sure Angelina Jolie was playing who I thought she was playing.

They went and made Grendel's Mom sexy.

I don't know what to say.

Aww hell, its the guy who wrote The Flash: Fastest Man Alive.

I would have a nice, long wordy reaction to this were I not too busy jumping up and down and clapping.

Now, I know some of you want to comment with your pessimism. I'm sure, when the casting rumors start, I'll be in a grumpy mood on and off, too. I am purposefully not looking at the directing and writing credits listed to avoid being letdown for a few more minutes.

For now, though, just let us enjoy this perfect moment, where we can appreciate that someone in a position to actually make the movie believes the movie is worth making. I am not allowing comments on this posts specifically to keep readers from killing my happy moment.
Posted by Ragnell at 1:33 AM