I was going to, when I got a breather, promote the Womanthology's kickstarter. I'm on the writer's list. (I also had a hand in picking the theme, if I may brag.)

Then a funny thing happened. The Kickstarter went live last night after I went to bed and by the time I reached the computer after work we were within $2K of our minimum $25K goal.

And then we blew it away. 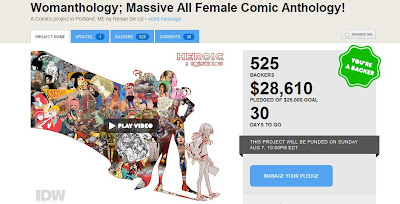 Donations are still being accepted, because the more money there is the more books can be printed. All the profit is going to charity, so production costs are dependent on readers like you.
Posted by Ragnell at 4:13 PM 3 comments:

I snagged the Abin Sur movie prequel on Comixology for the lovely Patrick Gleason art, plus I'm one of those suckers who can't resist and Abin Sur solo story.

I think I have a thing for doomed men.

Anyway, I'm glad I bought it. The art is lovely and we get a surprise Amanda Waller story to boot.

Unfortunately, there is a convention in this book that annoys the shit out of me and it's been popping up all over the place in Green Lantern in the past few years. 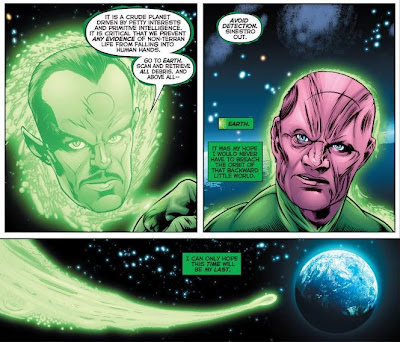 There's this idea that humans are looked down upon by every sentient being in the universe, because we're violent, primitive, warlike, and just generally awful. It's a way for the writer to make a point about what's wrong with our society and how far we have to go. It's also an easy way to for the writer to set up a strawman in the sneers of aliens so that they can defend human society.

We're also to accept that Abin Sur is responsible for 1/3600th of this universe. Inside his sector is every type of life imaginable, from bacteria to primitive peoples who haven't developed writing yet to full civilizations that have been developing for millenia and that cross the stars regularly enough to build communities inside that sector. I can handle this too, I think it's awesome.

But I'm sorry, I have to stop at the idea that a large number of these advanced beings give enough of a shit to comment on how much Earth sucks.

I have to stop at the idea that a large number of these advanced beings know anything about humans beyond us having not developed enough space travel to come out and say "Hi" yet.

I mean, it's one thing for the Guardians to keep tabs on Earth and be a little funny about it. There's lots of stuff on Earth.

And yeah, I can give the writer (Michael Green) some credit to the idea that maybe Earth is considered enough of a hotspot that Abin Sur was briefed on it when he took over. It is in his sector, and it is home to a species that gets super-powers when they are exposed to well... anything! Yeah, that might be important for old Abin to know. (Hell, between the Last Kryptonians, the Last Martians and the general weirdness of humanity, it's entirely possible that the Solar System is considered a Wildlife Preserve by Oa.)

I don't think this is the case, though. There's something off about what he said in this comic. And his attitude in the Flashpoint series. And just generally every notable appearance since someone retconned his last words to be "An Earthman... never thought I'd live to see the day."

And there's just this trend all across the franchise to having aliens bash humans, especially hypocritically, because they are traveling the spaceways without having achieved World Peace or a Warp Drive or what-have-you. And because humans aren't as scary to tease about this sort of behavior than Khunds are or any of the myriad hyper-violent species in the DCU that HAVE achieved unity of purpose on their homeworlds and interstellar travel so that they can make war on their neighbors.

I kinda forgave it in the movie because it was explained away as just a general look at how young the species is. There's some sort of taxonomy involved, I imagined, and humans fell into a group that was only so advanced and Hal wasn't just the first human but the very first person from that taxonomic classification.

And I get parts where they make monkey jokes, because it implies that these species are as advanced to us as we are to chimps, so we just look animalistic to them.

It just doesn't make any sense.

I mean, it's one thing to have Brainiac and Brainiac II copping an attitude because they have dealt with humans, but generally it seems like everybody in the Green Lantern Corps except Tomar Re and every idiot in a Mos Eisley Cantina rip-off scene has to make a comment about it. And none of them would have met a human before. 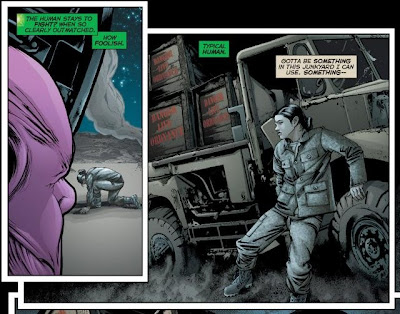 Only Abin Sur was in a position to have met a human besides Adam Strange or Captain Comet (both of whom are pretty damned awesome, so a negative opinion should not be formed based upon them), and he's played off as having had some pre-existing prejudice that goes away when he sees the Wall in action.

And yeah, I do remember the Legends of the DC Universe story where Abin Sur goes to the Old West and all the cowboys think he's a Native American. That's clearly not happened here, because if he'd had that adventure he wouldn't need the Wall to make him rethink how much humans suck.

If he'd had any horrible adventure there, he'd have said "It was my hope I would never to have to breach the orbit of that backward little world again." The implication is this is his first visit, and he wants it to be his last.

In the absence of any reference to a past experience and any reference to a prophecy foretelling his death on the world, we only have one explanation for Abin Sur's personal prejudice. There is a widespread dislike of humans among aliens. That's what every narrative clue in this book is telling me to conclude, that Abin Sur dislikes humans because he's been taught to dislike humans.

It seems absurd to me that we're so prominent in the minds of extraterrestrials that so many of them would bother to hate us. Abin's reaction on going to Earth should be much more matter of fact. It shouldn't imply that he's been dreading the idea of going to that planet his whole career. Really, he should either think of the specific items that the sector Lantern would be briefed on ("Last Kryptonian, Portal to Qward, Strange energy beasts sleeping within the planet that absolutely should not be disturbed, Queen Hippolyta and her Fleet of Invisible Jets...") or have to consult his ring and then pass judgement about how much Earth sucks.

If we're really a little backwater, primitive world... nobody should have heard of us.
Posted by Ragnell at 3:15 PM 5 comments: 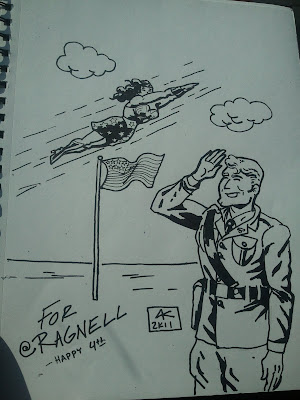 Look what Kapellusch made for me!
Posted by Ragnell at 11:55 AM No comments: