Today is the anniversary of Chris Sims' birth, and I searched through my back issues for a piece of art awesome enough to honor the occasion. I found a couple of panels that caught my eye.

Chris, for your birthday, I give you...

Kyle Rayner and Barda Free in an Art Museum. 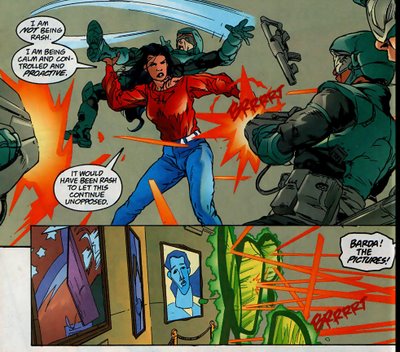 I feared I would be too tired to blog tonight, but Mike has saved me! With a Green Lantern version of the Random Panels meme that's been going around. What would Tom Kalmaku write in his GL Casebook? 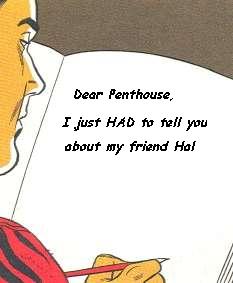 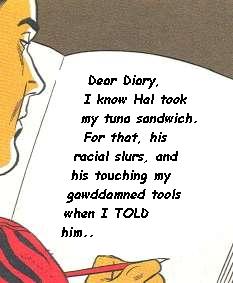 And here's my shot at the Bat Blank, though I'm sincerely surprised I hadn't seen it yet: 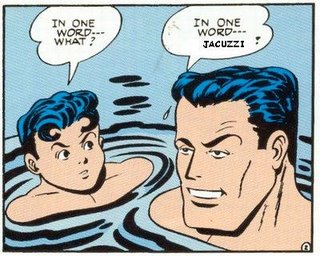 I can't seem to keep out of these arguments, this one's about Pantha, but I ended up with some insights I thought I'd share. I'm arguing with this guy, not about specifics, but on dismissing the sexism argument at the outset. Here's my argument:

There's a wealth of symbolism and story cliches that enforce gender roles that people are thinking of when they bring this up. They are also thinking of superficially similar situations with men where things were treated differently. Instead of arguing these points with valid counters -- men who have been injured SPECIFICALLY to bring angst to a female character, which is the actual equivalent of the Fridge accusation; or reasons the character may have been considered disposable -- you're just plain dismissive of the person arguing because heaven forfend, someone may have brought up sexism.

Here's the thing, we live in a society with still very strict gender roles, as a guy you must know this -- its it socially acceptable for you to wear certain clothing, to express certain emotions? Well, on the female side we experience our own problems, where you are not expected to be able to do a certain job (science, math) or think a certain way (mechanically, logically) as well because of your gender. Sexism still exists, as we still have assumptions in our society about behavior that's proper for a man yet is not proper for a woman, and vice versa.

Since society has these gender roles and presuppositions, they are going to show up in stories also. Probably moreso than they show in real life. It's worth examining a female role in a story and how it may differ from a male role, sometimes it turns out to be inconsequential, yes (I can think of a few anti-Arisia posts I had to read twice before I decided it wasn't a putting the blame on the woman attitude so much as a "The main character can do no wrong" attitude), rarely does it turn out to be malicious (Actually, I can't think of an instance where I've believed a moment of sexism in comics to be intentional or malicious), but sometimes it needs to be looked into and changed.

You can't simply dismiss the argument offhand because sexism comes up. You have to actually address the person's concerns on a mature level. It's not only perfectly acceptable to examine the possibility of sexism, it's downright important to consider the option, not only in the stuff you dislike but also in the stories that you do like, and in your own attitude. Considering the possibility does not lead to conclusion that it exists and even more importantly, Concluding that it exists does not imply that it was malicious, or that the writer is a bad person or an unskilled writer, just that the cliche appeared. Gender roles are a common storytelling tool, but they're restrictive for all characters and looking into them opens up creative opportunities by expanding your range of character types and situations.

Again, I personally disagree with JLG on Pantha's death. I don't even think that a Fridge moment is necessarily a bad thing (I do think it's a terrible thing when we only see women on the one side of that narrative tool. And at the moment I can come up with men injured to give angst to other men before I can think of men injured or killed to give angst to women). But that's no reason to dismiss his concerns out of hand as "Freaking out over a female character."

What do you think? Effective, or cause for more defensiveness?

Why I was lazy earlier...

Because at this point, I still can't do anything but babble about Chicago. Content will be coming once that wears off. In the meantime, I've told yet another con story at Zamaron.

Oh, and forgot to mention earlier. We cornered Keith Giffen and asked him a very important Blue Beetle question. Jaime is pronounced like HI-mee, with the Spanish "J" rather than the Jamie I've been using in my head.

Hopefully I'll have something of substance tonight.

1. One book that changed your life

2. One book you have read more than once

3. One book you would want on a desert island

4. One book that made you laugh

Tantra: The Way of Acceptance by Osho

5. One book that made you cry

The Lion, the Witch and the Wardrobe by CS Lewis

6. One book you wish had been written

Respecting Your Character's Religion: A Resource for Comic Book Writers by L. Fortuner

7. One book you wish had never been written

I'm going to cheat here and give two broad categories that cover the absolute worst of two religions. All books analyzing current politics for signs of the Endtimes and all recipe-style Spell-books should be retconned out of existence.

If that's unacceptable, then The Once and Future King by TH White (On my bookshelf there's a collected edition, so it counts as one)

8. One book you are currently reading

9. One book you have been meaning to read

The Second Sex by Simone Beauvoir

Damn, I hate tagging people. I almost never respond to tags myself, but I liked this one. Anyway, Kalinara, Chris Sims, Steven, Tekanji, and Kevin should offer some variety, should they choose to accept this.
Posted by Ragnell at 11:09 AM 5 comments:

I was at the DCU Panel and was generally very satisfied with their responses, but I've found out something very interesting since coming home.

Static or other Milestone characters? Levitz: "We keep talking about it. Nothing's come together yet. Dwayne McDuffie has been talking to Dan about bringing him into the DCU. But Dwayne's had some health issues."

I saw the above question. When I mentioned it in a conversation with West I was promptly shown this (he found it here):

Two things: Not that it's any of Wizardworld Chicago's business, but I didn't have surgery until May of this year. Eight weeks later, my doctors told me I could go back to work. Since then, I've written two comic books for Marvel, a series bible and development work for a new cartoon at Nickelodeon and sold a new animated series to BET. If Paul actually did imply that my illness interfered with ongoing negotiations, he has been misinformed.

It's been over three years since anyone from from DC Comics has spoken to me about using Static in the DCU. Dan DiDio and I had a single, preliminary discussion. I heard nothing else from DC until I was called on the phone a few weeks later by someone introducing herself as "the editor of Static Shock." I informed her that this seemed premature, as no agreement had been made between DC and Milestone. Since that call, I've heard nothing further on the matter from Dan or anyone else at DCU.

Looks like Paul Levitz has a little bit of explaining to do.

There are too many miles between Chicago and Oklahoma City. Maybe we could move Missouri out of the way.

Anyway, after a two day drive, I've finally made it back and I'm afraid to look at my bloglines. Wizardworld was a lot of fun, I got to see my sister, hang out with her, found a present for her, got my hands on Dracula vs King Arthur, picked up random independant books in Artist's Alley (mainly based on which sellers I liked best and how much cash I had on me at any given time), found a discounted copy of The Traditions Gathered sourcebook from White Wolf Games that had the Sons of Ether in it, read Tarot, fight on the way to the airport, make up at the terminal.

We had fun and a instant ice-breaker for all of geekdom ("So what happens When Fangirls Attack?") with our shirts, but sadly, no canned response. This was embarassing when, as I mentioned earlier, Dan Didio asks me for one at each Planning a repeat trip next year (not sure to which con) so we have until then to think of one.

I could have asked something insightful and relevant, but instead decided to ask about Carol Ferris and Katma Tui. Geoff Johns answered that we'll get an appearance by Star Sapphire, the Zamarons, and/or Carol in Green Lantern and the end of GL: Mosaic (Okay, I disguised my Katma question as one about John Stewart) is still in continuity. I asked that one a second time for clarity, and he answered in the affirmative in from of everyone. Then, as related by Kalinara, we approached him afterwards and clarified that I meant the resurrection. So, this could be interesting.

Two other people asked about John in both panels. More prominence for John Stewart is still a vague promise. I hope we won't have to wait for all of Hal's personal issues to be sorted out, or else we'll be waiting forever.

Dan Didio reminds me of an extra-enthusiastic Uncle who likes to give out presents, or a First Shirt.

Got autographs from Ron Marz, Geoff Johns, Dan Didio, and Keith Giffen -- now I just need to wait for that order of Dragon's Blood and Wisteria to come in at the New Age shop and I'm all set to control DC Comics for the next seven years! (Kidding... Put the torches away...)

I have a 52 poster with Grant Morrison's signature on it, and a beautiful poster of Hal Jordan in front of Saturn drawn (and signed) by Mark Sparacio.

I have pictures of all four of us together with Geoff Johns, and I desperately wanted one of me and Kalinara with Ron Marz but Kim went to a panel while he was signing autographs and my own camera didn't have working batteries. I have some nice pictures anyway, and someday I'll get one with Ron Marz for the website.

I was surprisingly excited to see Liberty Belle on the JSA cover.

Kalinara showed me the first part of Lexx which was appropriately weird.

I've now been lost in Chicago driving three times now, riding while someone else drives twice, and walking once.

On the way home I was lost in two Springfields, St Louis, Joliet, Joplin, and Tulsa.

Psychocat is still alive. (I had the apartment manager check in on him.) For an hour after I got home he whined if I wasn't petting him, and a few minutes ago he bit me. Twice.

I never called that guy who left me the love note (Dammit Kevin, learn to spell!), and I didn't see the Girl-Wonder.org folks at all!

But I still had a lot of fun!