He wears a smile.

Among the many fine offerings of the base library are boxed sets of the Twin Peaks television series. I remembered the series from when it first aired but as I was only nine years old at the time and had no control over the television (though I managed to see a few episodes because I remembered the premise, the Nadine amnesia storyline, and Agent Cooper) this was my first chance to see the actual resolution.

I understood that it would be strange. I remember that the main character was basically a clairvoyant FBI agent, that there was at least one character with unexplained superstrength, and the Red Room dream is infamous. I was prepared for a mystery/horror series, but I expected it to be more surreal than petrifying. But I had missed one thing in my sporadic childhood viewing. 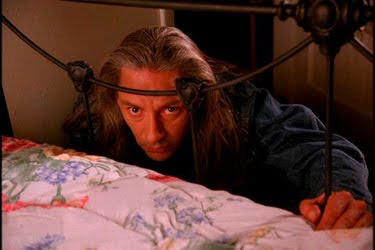 Bob is, without a doubt, the most terrifying character ever to cross the screen. Mike Myers, Freddy Kreuger, It? They don't hold a candle to Bob. Jigsaw? Don't make me laugh. Bob is the scariest thing ever put on film, and they didn't even need to give him makeup.

It's amazing. It's just this guy. This guy in denim with scraggly long hair. In normal life he'd just look like someone's scraggly uncle, but introduced in the context of the Twin Peaks series, he is nightmare fuel of the highest order. And the freakiest thing of all? He was an accident. Frank Silva was a stagehand who trapped himself on a set, and then got accidentally caught in the mirror in one of the scenes. 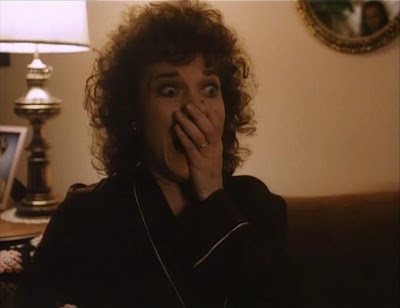 From there he became the star of sudden cuts, dream sequences, and of course, my nightmares. Normally I despise the quick cut to a gruesome scene or image in horror movies. It seems like such a cheap way to build tension. But modern movies tend to add particularly shocking images. These aren't particularly shocking images when taken out of context. The quick cuts tend to occur only when someone has a vision, or when the audience needs to know he's behind something. They build on the character's concept as a supernatural entity. Bob's appearances aren't a clumsy insertion into an otherwise dull scene, they're artful reveals.

The character never really gets any dialogue, but he doesn't need it. He just has to look menacing and slink around. Lynch used him only in shadowy visions and--most creepily of all--mirrors. By using him so sparingly and only in specifically unearthly scenes, he turns this ordinary guy into something completely unnerving. There's no makeup, CGI or gore needed. It's just lighting and emotion. It's bare bones horror.

That's fucking genius. That's how a horror story should be made. People and things that would be otherwise unremarkable are cast in a strange light and turned into something sinister.
Posted by Ragnell at 7:59 PM 6 comments:

Since there's only one book coming out this week (and I order from a retailer that keeps to his agreements), I'm looking at the possibilities of waiting an extra week or paying more for postage than for my order. I like to avoid either if at all possible, so I'm thinking about filling out the order a bit with things I've been meaning to try out but haven't gotten around to buying.

Now, I already have a list of interesting things and I don't plan to go overboard here, but I'm open for recommendations right now.  So I ask you--the three or four people who haven't cleared this blog from your feedreaders--what single issue, story-arc, or miniseries should I order this Wednesday?