Wonder Woman Should Be Tall 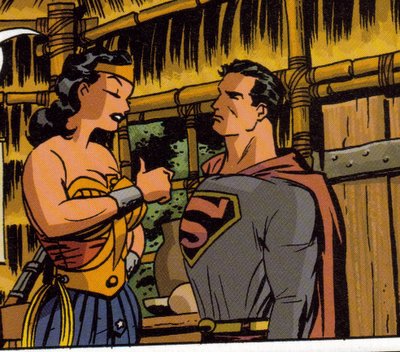 At work, there's a entryway on the airplane that I can't climb into without a hand up. I'm a decent height as women go, but I am just a couple inches too short to boost myself into it. Most of the men I work with get in there fine, so they can give me a hand up afterwards. This afternoon I was standing helplessly outside this entryway (as the staircase to the main cabin had not yet been set up) and contemplating Mallet's comment on the Wonder Woman/Green Lantern picture in my previous post when something occurred to me: Wonder Woman should never be in this situation.
(Yes, There's More)

And I don't mean because she can fly, or jump really high.

No, I mean because Wonder Woman should be tall. I don't care what the Secret Files profile pages say. She should be tall. Not "tall for a woman." I mean, outright tall. Divinely tall. Tall for anybody.

This effect should be enhanced by her physical makeup, not despite it.

She should tower over other women, and most men.

What does she represent? Truth and Femininity. Perhaps even, the Truth of Femininity.

What did her creator intend originally? By nearly all accounts I've read, William Moulton Marston was a Female Supremicist who intended to show the best most outspoken parts of femininity through her, without shame or shyness.

And Wonder Woman should be outstanding!

No, Wonder Woman must be outstanding!

She must stand out, to better encourage all women to stand out!

She must be also somewhat large.

And I don't mean muscular and masculine large.

I don't mean obese either (but I can't see why she shouldn't have charming fat deposits on her tummy and hips like a real woman anyway.)

I mean tall and curvy, big hips and breasts.

She must be vital, powerful and beautiful. The Brave Little Tailor image of the small hero facing the huge beast may work for Green Lanterns but not for Wonder Woman. Diana who teaches that women can overcome any and all barriers should never look small. She should never look like a "normal woman" because Diana represents what is extraordinary about womanhood! All that's wonderful and enjoyable and admirable about femininity.

How could you want to cut that short?

Diana should never be short, because she is the Height of Womanhood. She is Femininity at its Largest. She was created during a time when women were still were encouraged to think small, act small, and repress their Largeness (their ambition, their demonstrativeness, their lust, their Loisity) because men don't like that. Diana, in her need to explore and experience, attempted this as Diana Prince. She kept her height, but she pinned down her ample bosom underneath a dark suit, slicked her bushy Greek hair back, and hid her eye makeup behind glasses.

But even she chafed under all that polyester.

Even she constantly rolled her eyes at stupidity it was taboo to point out.

Even she said "Enough is Enough! My Largeness can no longer be contained! I need to fight, drink, dance!"

So, Diana becomes Wonder Woman, and she tosses that attitude aside.

Large as life and twice as bright, as the saying goes. But she does stop there. For Diana, it is not enough to just be Large.

She flaunts her Largeness.

Remember Steve Trevor? (The early years). The very man who ignored her traditional small alter ego fell head over heels for her Large, Lusty True Self!

Is that because she's a normal woman who can lift cars? No, many women in the DCU can do that.

It's because she's Wonder Woman, Dammit.

She's unstoppable and overwhelming to all. She bursts off the page with all the combined energy of a single working mother rushing to get her kids to school before her meeting, a teacher who sees a child running with scissors, a shopper at a Boxing Day sale, a woman who watches pornography to heckle, a new airfield worker trying to get her lazy-ass coworkers to train her, and a female slash-fic writer who sees a male character saying his favorite pick-up line to another male character.

Diana lives to explore and conquer new territory (with loving submission, of course). She is the first woman to leave her homeland in three thousand years! Now that is a Large thought. That is the Largeness inside of every woman screaming to get out and see the world.

Not a delicate frail fair maiden, but a vibrant goddess of life and beauty. And yes, a giantess! A beautiful, talented, amazing, strong giantess who can pick up any man she wants and carry them to the Temple of Aphrodite (Route 6, Exit 51) for a sweet night of physical pleasure, political philosophy, and bondage games.

And who doesn't need Joshua to give her a boost into the airplane.
Posted by Ragnell at 4:10 AM 34 comments:

Good morning. I've been instructed to brief all Lanterns on the Guardians' Sexual Harassment Policy. There's a roster being passed around, please intial next to your name, or I'll have to read this to you again. 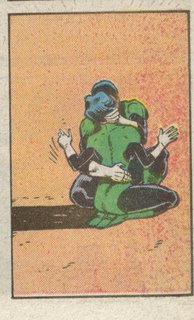 Romantic liasons are not restricted among Corps personnel. It is strongly enouraged that you research the mating rituals of your potential liason prior to the actual liason. 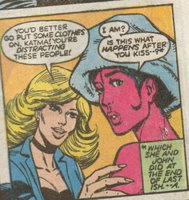 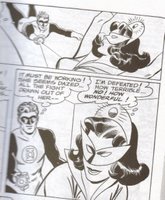 For example, violence is permitted as a response to unwelcome advances, but in a number of cultures it is simply the next step. Please know what you are getting into.

Standard Policy is that no means no, especially when the mental state of the refuser is in question.

Do not expect help from your chain of command. Any one who is unable to fend off the advances of Senior Lanterns Gardner or Jordan on their own does not deserve to be here.

Please be warned that the persons you will interact with outside of the Corps have no such restrictions on their behavior, and may have less than honorable intentions. 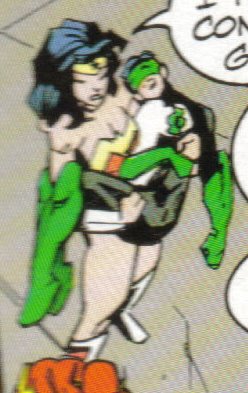 You have been briefed.
Posted by Ragnell at 3:35 AM 11 comments:

(There are numerous amusing Holiday posts throughout the Blogohedron. I'm taking a day off.)

Have a joy-filled winter religious festival of your choice!
Posted by Ragnell at 5:11 AM 5 comments: