Did ComicsSpace just get useful?

ComicsSpace Bulletins just went online. If anyone else is like me, and just collected people for a little bit then got bored, there's a use for that account now.

I'm going to use mine to link people to stuff, as that is the purpose the the internet.
Posted by Ragnell at 12:53 AM 4 comments:

From Tangled Up in Blue:

A lot of the people I know, online and off, identify a lot more easily with male characters than with female characters, which I suspect is one of the major stumbling blocks when we all try to discuss this stuff from equally well-meaning but very different positions. Because I don't identify more easily with men than with women. I don't know why that is. It wasn't, when I was a little girl, a political choice I made. It's just part of who I am, and it influenced the way I grew up and the beliefs I hold as an adult.

There's a book I have called Fearless Girls, and in the introduction the writer talks about going to a school and reading a picture book to a kindergarten class. At the end of the story, she asked the kids who they'd 'been'. Who had they identified with in the story. And one of the little girls flipped through the pages to a crowd scene, and pointed out a girl in the background -- the only female character in the story. That's how I feel sometimes. It's why I end up fixated on hobbits who show up for two scenes at the end of a three-book trilogy.

There are certainly male characters I'm fond of; that's no revelation to anyone reading this, I'm sure. But I want Sarah Connor as well as Mad Max; Zoe as well as Jayne; Jessica Jones as well as John Constantine, Stephanie Brown as well as Tim Drake. I want the option to identify with a female to be available to me.

Your mileage may vary; I know it does for a lot of you. But my mileage is as valid as yours, and isn't as reflected by what I can watch, and that's why I haven't shut up about it yet. 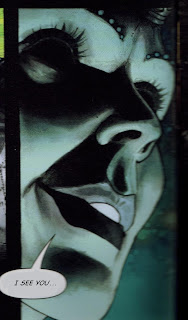 Anyway, I nearly missed it, and there's only a couple days left, but Tom informs me its National De-lurking Week. So leave a comment, even if you normally just read.

Last time I asked for guesses as to the context of the image, but you should all know this one even with the words changed.
Posted by Ragnell at 5:37 AM 54 comments:

If Anyone Ever Wonders Why I'm So Arrogant When Discussing Comics...

It's a pre-emptive strike. I've experienced what Reb has in every comic book store in four cities. (Via FSF Carnival 9)

Two other guys, both of them nerds, were there. Both of them overheard. And upon affirming that yes, I really like Batman and have a mild interest in and knowledge of comics, I was asked what other titles I read.

This was not a friendly question. It wasn’t the way you’d ask a new acquaintance what they read to see if there’s anything to discuss or bond over. It was a challenge, which they made very clear. The question may have been, “What other comics do you like?” but the subtext was very clearly, “You’re a girl, what other comics could you possibly actually be familiar with?”

But I am, as I said, conversant in Batman and passingly interested in comics. So I answered honestly that I don’t really read a lot of comics, and definitely know more about Batman than anything else, but thanks to friends who were really into them, I enjoy both Green Lantern and Green Arrow. And the guys in the staff room, well, freaked out.

The questions began. First I was asked to establish more credentials, and it wasn’t even innocently phrased anymore. One guy said, word for word, “If you really like Batman, name three Robins.” Because hey, I’m me, I busted out Stephanie Brown, in fact, and not Tim Drake. I was then told that I’d forgotten one. (“No, you asked for three and I named three. If you wanted Tim, you should have asked who the three male Robins were.”) I was asked who killed Jason Todd. I was asked to detail current storylines.

And again, keep in mind, these were questions to establish that, good god, I really was a living, breathing girl – an attractive one, no less! – who was into something nerdy. One of the guys responded with wonder. The other, who many women at the store have had other, far worse kinds of run ins with, was angry and condescending. (Needless to say, he was the one who hadn’t even realized Stephanie was a valid answer to the Robin question.) This all went on for a good twenty minutes (until our break ended, in fact) and through the whole thing I got more flustered and more angry, though I couldn’t quite put my finger on why until later.

Ahh... Nerd Superiority plus sexism. Didn't Atalanta set up the race rule because of a similar combination?

The absolutely wonderful Betty has put together the Ninth Carnival over at League of Substitute Heroes!

Go check it out!

And if anyone wants to step up to host the tenth, contact me.
Posted by Ragnell at 5:46 PM No comments:

I Hate Being Wrong

We needed a scene in which Connor undeniably had sex with a female so we could stop the assumptions that Connor was gay.

Let me start off by saying that is the stupidest excuse for having a sex scene I've heard outside a Laurell K. Hamilton plot.

And it serves to kill some of my interest in Connor Hawke.

I didn't read much of Dixon's Green Arrow, just the Green Lantern crossovers, JLA and the relaunch. From them, though, I never got the impression of a homosexual man. Instead I thought he was asexual.

Now, for those of you unfamiliar with the term "asexual" as applied to human beings, let me explain it to you the best I know how. If you've ever been pretty drunk while a remarkably attractive person is kissing you and begging you to spend the night but you turn them down because you don't feel like going to the trouble of undoing a button fly on somewhat tight jeans, the term might just apply to you. If its not shyness that keeps you from approaching the gorgeous person who sent you a drink, but an unwillingness to give up your seat in a crowded and noisy club, the term probably does apply to you. I don't mean anyone who turns down sex in a "it's not my type" or "I'm aroused but repressed by low self-esteem or cultural taboo" way. I mean someone who turns down sex in a "I have better uses for my energy" way.

Its a lot more complicated than that, and there's probably a bunch of people ready to nitpick this definition, but the basic idea is no real interest in sex.

That's not to say there's no interest in romance or attraction, which is where I got my impression of Connor Hawke. He liked women, but really didn't have an active sex drive.

It fit with his whole relaxed archer persona. Like Ollie, pretty much all of his sexual needs were met. Unlike Ollie, he required very little in that department.

Until, of course, I saw these pages.

Instead he's just another repressed, sheltered young man for writers to project their own adolescent sexual insecurities through, or play off cliches and cheap jokes with.

This character is strange. I'm reasonably certain that he was a 90s attempt at racial diversity. I remember one comic that described him as part white, part Asian, and part black. But, they gave him blonde hair and most of the artists draw him like a white man anyway, so nobody knows unless they specifically point it out.

In the meantime, he seemed, to a lot of people, like a chance at sexual diversity. A lot of people read him as gay, and I'm sure I'm not the only one who read him as asexual. They can still make him bisexual if they want (there's really no way to close that door on future writers). But that message board conversation proves that he was created to be a stock heterosexual young man.

And he looks like a stock white man, unless you go out of your way to point it out in the story (and you shouldn't have to).

They could, of course, have let it be subtle and been ambiguous so that individuals could project on him, relate him to themselves or people they've known. But that intense need to establish sexuality early on shut the door on that, and made the DC universe just a little less diverse, and a little less interesting, than it could have been.

In the end, of course, it proves nothing but Dixon's double-standard on censoring homosexual relationship. People experiment, even asexuals, and a single love scene doesn't set things in stone. A later writer could establish him as gay and retcon this out, or explain it away as him doing what he thought he was supposed to do and have a big awakening sexuality storyline.

The only difference now is, as opposed to being irked that he's gay rather than asexual like I'd thought, I'd find myself logging online in sadistic glee to read Dixon's reaction.