I know I've been quiet lately, but I am still recovering from vacation. Posting will pick up soon.

I did a convention report with Kalinara here and here. (I also managed to get a very abbreviated version of my feature out as well.)

I also sold a story last month. Its only a two-page story, but its money. The book's been sent to the printers, and I'll link it here when its on sale.

And the 16th Carnival of Feminist SF/F Fans has been posted! I am still looking for hosts. Email me if interested.
Posted by Ragnell at 3:30 PM 4 comments:

One of the first pieces of news I find when I get home is that Mike Wieringo has passed away.

He's one of the first comic book artists I learned to recognize, from his Flash stuff.

ETA: Athelind found his DeviantArt Gallery, in case you've already gotten through the sketchblog.
Posted by Ragnell at 9:12 PM 1 comment: 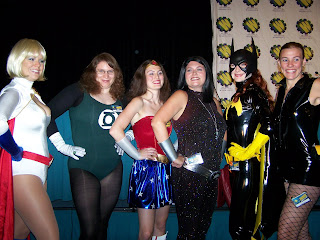 However, I did get to attend something extremely fun that will make many of you very, very jealous. I also got to be an annoying loudmouth at DC panels. I have way too much fun at conventions.
Posted by Ragnell at 12:05 AM 29 comments: