I Thought I Knew Her 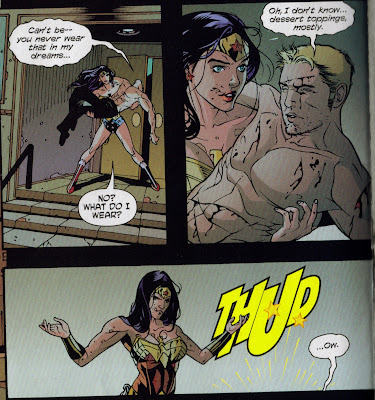 Does anyone seriously think Wonder Woman, as characterized up to now, would do that? He made a joke. A stupid, sexist joke, but that doesn't deserve that kind of treatment.

I admit, Wonder Woman is a very strange character. Nearly every writer makes a point of talking about how hard she is to define, and a common complaint on message boards is that she's a cipher. She's been said to be the hardest character at DC to write.

Personally, I just see Diana as a complex and multifaceted individual, much like the ones you meet every day. Not entirely predictable, and you see different sides of her personality in different situations. Most writers have had a slightly different take on her, to the point that I've seen it described as "schizophrenic," but I always looked at her as a person made up of the gifts of seven very different deities (her six patrons, plus Ares who as her enemy seems as much a part of her as the others). With that in mind, the different portrayals fit together nicely, and there's even a single underlying personality trait.

You see, the secret is that, even though none of us can say we know who Wonder Woman is, its always been very clear that she knows who she is. There's trouble connecting with other people, and the gods, and her purpose, but Diana has always been centered in herself. Confident. She knew exactly what she was inside.

Its a great departure from a lot of the other characters in comics, always soul-searching. Diana had her soul, her problem was where it fit with everyone else's. The world would fall apart, and Diana always knew who she was and what she was doing. to the end of Rucka's run, she knew. It was comforting.

Even in Heinberg's story, where she professes she needs to find herself and get to know herself, that confidence and comfort is there. She has herself, she knows herself in her heart, she just can't define herself and how she relates to others anymore, so she intellectually wonders. But she knows.

It was the one consistency in Wonder Woman's characterization, and now its gone. All of that wistful mirror-gazing and angsting and confusion and loss of real-life skill has knocked that confidence away from Wonder Woman.

All of the other writers may have been confused as to exactly who Wonder Woman was, but hey, even Mark Waid who wrote her in a dystopian future where she'd lost her way and professed that he didn't understand the character seemed to understand that Diana knew who she was and was comfortable in her own skin.

Its how we, as fans, can disagree on a description of her personality but look at a scene like the one above and immediately know that that's not right That's not Diana.

Who is Diana? Who is Wonder Woman?

Wonder Woman is not supposed to be like that. Wonder Woman is supposed to already be the woman other women in fiction learn to be. She's at the point where you are done working on your inside and ready to work on the outside world.

Wonder Woman is not for a deep, thoughful, soul-searching journey where, through the character, you learn your own self-worth despite the crap thrown on you by society. Wonder Woman is for when you want to sit down and vicariously kick misogyny's ass, because it seems like the world is working against you're fed up with not being able to make a change for the better externally.

That may be hard to plot, but really, how hard is it to understand?
Posted by Ragnell at 4:45 AM 26 comments:

Admittedly, the classroom scene was worth the price of the issue.
Posted by Ragnell at 3:31 AM 8 comments:

Well, that was MY reaction when I actually read it.