Okay, so I found out on Twitter (via various) last night that Tom Brevoort dropped a fun Captain America image in our laps. A female Bucky.

I'd like to smack the guys who say that Natasha and Sharon are the obvious choices over the head, and not for lack of continuity knowledge. It's an insult. Natasha and Sharon have identities. Damned good ones, at that. Sharon may arguably be the sidekick-girlfriend (which works for her, she's as very cool sidekick/girlfriend and right-hand woman to Nick Fury--they really should've kept her that way in the Ultimate Avengers movie rather than trying to put her personality on Natasha), but she is a well-established as a superspy and a sidekick/girlfriend under the name Agent 13. Black Widow is commonly a partner and love interest, but she's one of the leading female Avenger characters, and of all the supporting cast roles she's had she's never changed identities to suit her boyfriend. Switching to be a female Bucky would be a serious downgrade from their own well-rooted identities.

And nothing that these women have done, and nothing in their plotlines suggests that taking on Bucky's costume would be natural. If Tasha wants to hide her connection to the New Captain America, it's too late. Sharon's emotional connections are to Steve. She may have a lot in common with Bucky, but she's got no reason to emulate him. It could be pulled off--as part of some temporary trick--but the assumption is horrible. It just doesn't fit either woman.

Not to mention they have the Spy vs. Spy theme going on with their current costumes and we've yet to see an artist play with that.

My own first thought on just reading about the picture was that Bucky had a long-lost daughter or granddaughter surface because there is ample opportunity for him to have had children. And grandchildren. (I still fully expect some day he'll run into Rick Jones and ask if his grandmother was a Red Cross volunteer named Katherine Jones who was in London during 1943. It explains nicely why there was a perfect Bucky lookalike around when Steve defrosted.)

Then I saw the picture. 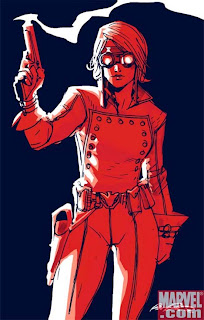 Admittedly, she does look like Natasha (its the red shading), and if Natasha ever had any kids it would have been pre-Widow treatment (I've been informed she's sterile since getting that Russian serum). A writer who wanted a Black Widow/Winter Soldier story would be easily able to fit the affair with Bucky in while she could still have kids, and get a baby or a set of twins out of it. Especially with Tasha's messed up memory. Perfect soap opera/superhero baby setup. They could bring them in at any age they want and do their motherhood story with Tasha without taking her out of action for nine-plus months of storytime.

It's the Heroes Reborn character (Yes, that's all the poor girl gets on Wikipedia), and I'm really happy about that. I always liked the idea of a female sidekick for Cap, but the art was just too horrible to try out. I've been wanting a chance to read this character without really dreadful art.

I'll be happy as long as she doesn't die horribly. (Yes, I'm looking at you DC and your female Robin stunt.) I sincerely hope this is not just killing an "excess character" off. It's one thing if she's just a ten-page backup story that ends with her retiring from superheroics to have a normal life, it's another if she gets horribly killed off as a way of illustrating the dark nature of the world and brushing that whole Onslaught/Heroes Reborn craziness under the rug. Way too often cleaning house in a franchise involves getting rid of young female derivative characters in really shitty ways.

But that's a really awesome picture, so I intend to be optimistic.
Posted by Ragnell at 3:02 AM 12 comments: