What I Learned in Nevada

I was thinking about you all while I was gone.

Partly because it was a work trip, and I was stuck in a strange city, feeling pretty sick, with a lack of money and no access to the Internet. Partly because I was not with my normal crew (one person for each freaking system!) and I'm actually very shy in person, so I didn't hit it off with all of the others. Partly because I despise the singles scene -- loud clubs and smoky bars -- that everyone else there was so enamored of and so, with my dehydration headaches amplifying my ill-will towards all humanity, I ducked out of most socialization opportunities and I didn't have my cat with me. So I was a little lonely in Nevada.

But mostly, its because of my addictions. I'm addicted to blogging, and even with my normal crew in Oklahoma I can't express my thoughts in person without being tuned out. For example, we were discussing the USAF Academy, and I started describing the guy I knew who went there -- who had had a beautiful head of blonde hair that they had made him shave off, and his head was not shaped for it at all, and as a result I hate most military haircuts -- and the hydraulics guy fell asleep! That never seems to happen online. I'm not sure why you guys read when no one in person will listen, but you guys read and I never tell you how much I appreciate that but I do.

I'm also horribly addicted to comic books, and did not have access to them for two weeks (aside from the too few trades I brought with me) or access to anyone else with an interest in them for two weeks. So, all of these thoughts kept coming to me that I really couldn't share. I wrote some down, but mostly I just filed those thoughts away under "Will blog about, don't need to ramble on."

I planned to do something different when I came back. I read Manhunter, and thought I'd share how much I liked it. I thought maybe I'd discuss Grant Morrison's late cat, or share some of the panels from World's Finest that make me particularly happy.

But after a few days of actual work, I knew I had to go back to Green Lantern.

You see, I got two things out of this trip: $23 and a deeper appreciation for Hal Jordan. At first I appreciated that character because he was cute. Then, after Emerald Knights, I appreciated him because he could learn that he's destined to turn evil and destroy everything and try to move past that crap. In back issues, we all learned he was easy, which just completely upped my esteem of him. Now, I really learned to love him when Scipio pointed out what a klutz he is. You see, I hit my head a lot, too. On the plane. We have parts in awkward places and if you try to stand too fast -- Ouch! But I digress.

Anyway, I've learned a new way to appreciate Hal. I now appreciate him as Tom Kalmaku appreciated him.

(What did you think I was going for?)

You see, I got to spend two weeks in Vegas working on aircraft. This isn't the normal stuff I do in OKC, because there was minimum people available. So, they needed help with a lot of the ground crew preparation stuff (Normally I only deal with the plane AFTER the dangerous, unpredictable crew has left).

I got to be a wingwalker (the guy to the side with his thumb up so the pilot knows he has enough room to either side -- not the guy in front in the safety vest with cones. The guy in front is called a marshaller) for two different pilots. I came to call them Hal and Bizarro Hal.

First, we launched Bizarro Hal, the Yellow Lantern. I will say, right away, that I didn't like that crew that much. The co-pilot was a moron, the navigator was a moron, and the radar guy was a fucking moron. I won't go so far as to call the pilot as moron, but he was certainly afraid to taxi (drive the aircraft from parking to the runway).

He asked for wingwalkers not only for his first turn (as is standard), but in front of every other aircraft on the parking ramp -- just in case. Even though there was ample room. But that's okay, it was his first day on the airfield. It's understandable. After everyone was onboard, he took an extra 15 minutes talking to the crew chief to triple check and make sure everything was okay with the plane before he taxied out.

It was a full twenty minutes before he got off the ground.

When he got back, he was late. He had a missed approach (when the pilot is ready to land then changes his mind for whatever reason.) He stopped on the edge of the taxiway for about ten minutes. I'm not sure what he was doing, but he was probably annoying the Ground Controller in some manner. We waited, in our marshalling positions, for a long time. He finally started taxiing to parking. There was a sign to the side of the ramp. He freaked out, and had a wingwalker come in and stand by it.

By the fourth day, we were all getting a little perturbed with him. Especially the crew chief who talked to him before each launch.

The second week, they switched. Bizarro Hal had to do night flying, and we get to work with Hal.

Hal gets into the aircraft, does his checklist, double checks his stuff, and shoots the shit with the crew chief while he's waiting for the rest of the crew to show up. Once everyone else is onboard, they close up the jet and he asks for the marshals.

"Do you need extra wing marshals?" the crew chief asks him.

"Nah, just enough to make sure all the ground guys are out of the way as I pull out of the spot," he answers, and taxis off once he gets the signal from the marshaller.

After a week of the Yellow Lantern, we're all in awe of this. The same crew chief who cursed Bizarro Hal every day is dancing and singing the praises of Hal.

I'm thinking, though, that maybe it's since a week has passed the other guy's gotten better.

Well, we came into work one morning and saw the notes from night shift about the state of the other plane: #3 was "Crew is a pain in the ass."

It seems that Bizarro Hal behaved precisely as he always did, and, in addition to that, had heard something strange in the first engine. But, of course, the co-pilot stated that it was the second engine. The Navigator heard it in the third engine. Could we please look at that?

Oh, and the radar tech broke his seat.

Nightshift had their engine guy, their flight engineer, and the supervisor of flying listen to the engines. They sounded fine.

We had our engine guy, our flight engineer, and our supervisor of flying listen to the engines. They sounded fine.

This was possibly the eighth thing that radar guy had broken this trip.

The jumpy pilot showed no signs of relaxing, and continued to monopolize the ground crew when taxiing.

Meanwhile, his more relaxed counterpart continued to look better and better. Taxied off every morning without a hitch, got off the ground on time, landed on time and early each time.

I can see why Tom Kalmaku put up with Jordan's stupidity on the ground. His piloting skills were worth it. A jumpy pilot is like a nervous puppy who pees on the carpet whenever he's startled. Tom attached to Hal pretty quick, despite insulting nicknamed. His previous pilot was probably a jumpy, nervous person who needed all sorts of babying whenever he was taxiing. (I wonder how guys with that temperament can fly -- I mean, you can't use your brakes in midair) A confident, comfortable pilot, even an oblivious racist who kept hitting his would be a relief afterwards.

I was originally scheduled for Bizarro Hal's flight home, which had me nervous, until they switched me to Hal's flight. That was fun, but also kind of scary.

He's a great pilot when you're ground crew, but if you're waiting on the plane for everyone to board and he's got "Eye of the Tiger" playing over the loudspeaker, it's a bit intimidating. The hydraulics guy (who had exclaimed "I LOVE this pilot!" the day before) voiced his concern for us ("I'm not sure I'd wanna fly with these crazy motherfuckers") before he left to help launch.

It all turned out all right, though. Even got home with enough time to pick up the cat and my comics before snow started falling.

Have You Hugged a Psychic Fish Today? 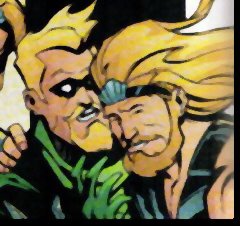 According to my Astrological Calender the Sun Entered Pisces today at 2:25 PM EST.