Looks like one of those shadows is now filled in...

Newsarama has the DC teaser solicits up already (full solicits on Monday). Down at the bottom they have a picture of the JLA#4 cover with what looks to be a slight spoiler on the lineup.

A few more thoughts before the full solicits come out:

On Birds of Prey's cover, we see prospective membership candidates. This may be some character's one chance to get away from Judd Winick or Daniel Acuna...

Why isn't Beau Smith writing this?
Posted by Ragnell at 10:24 PM 13 comments:

I've only seen this on the Beat, and have just gotten around to posting it now that I've also seen it on a message board. Adam Hughes talks about All-Star Wonder Woman on Byrnerobotics:

Secondly, I am not doing a 'monthly'. My commitment to ALL-STAR WONDER WOMAN is for 6 issues. My schedule is to hand in 10 pages, pencilled and inked, a month. The issues will be released monthly, on-time, because we're starting far enough in advance. You will get your ALL-STAR WONDER WOMAN every four weeks.

I think that if the announcement had been worded that 'Adam Hughes is doing 132 pages of WONDER WOMAN', there'd be less confusion and consternation.

Later on, he gives us his intentions for the series:

As for ALL-STAR WONDER WOMAN, wish me luck. DC is really letting me do my thing, and if the books stinks like a fishwife it'll be all my fault. :-) I'm supposed to do 10 pages a month (I'm shooting for 11) so that way I'll (hopefully) have a 22-page issue done every 2 months. I'll be staying on the covers of CATWOMAN while doing this, so that no one thinks I'm dead. Laura Martin is going to be coloring the book; I'll be working hand-in-hand with her to make sure the books looks as good as it can. Check out our 2-page Wonder Woman origin in DC's 52, #12 for a taste of how ASWW will probably look. My dream for ASWW is to cram as much character & story into Diana's tale as humanly possible, with the type of action set-pieces that will make Joss Whedon scream "Damn you, Adam Huuuuuuuughes!!!" into the rain, shaking his tiny fists in impotent rage.

Hopefully he means that he has an issue due every two months for the company, and that it will actually ship every four weeks as he said in the original post.
Posted by Ragnell at 6:55 PM 7 comments:

It's still bothering me...

This quote from Reginald Hudlin.

"Why did you choose T'Challa's [Black Panther's] first love over his ex-fiancee, Monica Lynne?

RH: Because Superman should be with Wonder Woman, not Lois Lane..."

No, not for the previously mentioned reasons.

I've seen people pair up Wonder Woman archetypal Equivalents with Superman sorts before. It's not a bad thing in itself (though I still maintain that it is a terrible idea using Wonder Woman herself and superman himself), but still, I have a problem wtih that quote.

It's the comparison of Black Panther to Superman as Storm is compared to Wonder Woman.

You see, Storm is part of one of the most popular comics of all time. She was a regular in two cartoon series, a headliner in three movies, part of six video games and has been seen on a fairly regular basis in various X-Men books since 1975. She was even voted by fans, during the Marvel vs DC crossover eyars ago, to beat Wonder Woman in a fight.

Black Panther has appeared as a cameo in a Fantastic Four cartoon, on and off as an Avenger, and in various, oft-cancelled comic book series. He's projected to appear in an animated film.

Storm, having the more consistant media explosure, is considerably more popular and well-known despite being all but written out of X-Men in recent years. Black Panther is getting a push right now for the big time, but really only appears in his own book and has very little outside of comics media coverage.

Based on cultural impact and exposure, a far better analogy (much as it breaks my heart as a Wonder Woman fan) is that Storm is to Superman as Black Panther is to Wonder Woman.

Now, as a Wonder Woman fan I am vehemently opposed to a marriage between Clark and Diana. However, were it (one of the signs of the Apocalypse) to occur, it would occur in either an extra-sized wedding special, or Superman's book. The two characters would either both appear in both books, or Wonder Woman would become supporting cast in Superman's book. Because, as a Wonder Woman fan, I am realistic enough to know that Superman is the more popular character, and that the plotline would revolve around him.

So why is this marriage occuring in Black Panther's book and not one of X-Men series?
Posted by Ragnell at 11:00 PM 31 comments:

I was going to leave Marvel alone this time... 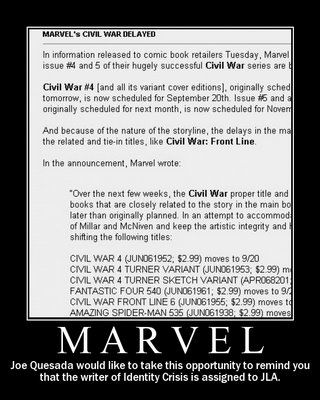 (In the end, I just couldn't resist)

In case you don't believe me.

(EDIT: Oops. I worked dayshift, so I was in a hurry to get to bed last night. I made a slight boo-boo. Didn't see it until I came home from work. The WFA-list is now back on WFA. Sorry!)
Posted by Ragnell at 1:55 AM 4 comments:

(Okay, Jenn is right, we need an acronym)

Anyway, because of the fuss of Wizardworld Chicago, I was remiss in my organizer duties and didn't get this information out as immediately as I should have. You still have ten days, though.

The Fourth Edition will be at Shrub.com on August 25th. Deadline is August 23rd

The suggested writing theme is feminist utopias and dystopias, but (as always) you’re free to write on anything that fits into the official guidelines.

Submissions are due by Wednesday, August 23, and can be mailed to me here (please use the subject heading Feminist SF Carnival) or submitted it via the Blog Carnival form.

Posted by Ragnell at 1:39 AM No comments:

The Sound of Nobody Disagreeing

You scored as Green Lantern. You would marry GREEN LANTERN! You like hotheaded flyboys. This guy is also a test pilot. Don't wear yellow and he will take you on the ride of your life.


What Justice League Member (Male) Would You Marry?
created with QuizFarm.com

Okay, I am surprised Green Arrow scored so high...

From the DC Nation Panel at Wizardworld:

Strange, my question would have been when do we get to see the writers and artists handle her more like Supergirl and less like the Bomb Queen?

So before Loeb left, Supergirl was a top 10 book. Now that there were creator changes, delays, subpar plots, Supergirl has now been pushed back to the 20s. Here are the sales numbers provided by Newsarama.com :

Okay, who's still buying? I know I'm not buying. I tried it out for Greg Rucka, and a scan of issue #7 told me the followup writer wasn't for me.

I know the incest love triangle thing is really interesting in a Jer-El Spring-Er sort of way, but if you want a real Supergirl, you're going to need to give it up. Save yourself three dollars. Buy the LSH one instead.

Because if sales keep dropping, we'll get Supergirl back!
Posted by Ragnell at 10:39 PM 20 comments:

I don't know why I was looking through the "I" section of the back issue bins at the store this week. Maybe it's because I know the "G" section by heart by now, and this was a change. Either way, I managed to find, for a dollar an issue, just about the entire run of Icon from Milestone Comics (I'm short issue 15 and 16). I felt guilty snatching them up, because they're tough to find, so I grabbed the first few issues and a few with Rocket (his sidekick) on the cover. I went back today and snatched up the rest of them.

Icon, on first glance, looks like the Milestone Comics version of Superman. Hell, he had the "Strange Visitor from Another Planet" bit down in the first two pages. There's a few major differences. For starters, he's black, and wears red and green as oppose to blue and red. He does some funky energy thing with his hands. Has no vision powers. He landed on a plantation in 1839, as opposed to a Kansas farm 30-40 years ago. He was a fully grown and matured alien being, but the ship physically changed his body to that of an infant human to keep him safe. He was raised during this false childhood as a slave, ended up in the Underground Railroad, fought in the Civil War, amassed a huge fortune, and works as lawyer Augustus Freeman IV (said as "the Fourth" in a snooty accent) in the rich part of Dakota (Milestone's fictional city). He's conservative, keeps to himself, and believes people can pull themselves out of poverty by their bootstraps. Actually his teenaged sidekick Raquel Ervin, Rocket, talks him into putting on the tights when she finds out he has superpowers. Seh designs the costume, she tells him what he needs to be. Tells him he has a responsibility to inspire and protect people, and, fortunately, he's just idealistic enough to listen.

In Icon #2, on their first night out as superhero and sidekick, Icon and Rocket leap into a hostage situation, and find the Dakota Universe equivalent of the Metropolis MCU pointing guns at them.

Icon, like any innocent citizen who's spend the last few decades in the rich part of town, and votes Republican, puts his hands over his head and offers to explain.

This could have gone one of two ways. Later on in the series, the cops are indeed established as decent people. But this was a tense situation, there still might have been a fight even if Icon got a chance to explain. Or, they could have treated him like Superman, and given him a shot. It could have been good or bad.

But we shall never know, because he was with Rocket. 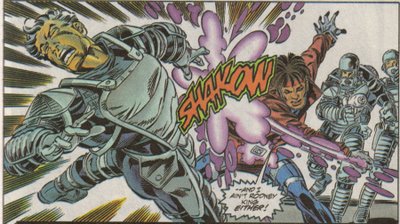 It is a page and a half before we see Icon again, but it's worth it.

I think it's safe to say he's never had a teen sidekick before.

Never fear, they actually get to fight the villain in Issue 3.

(This post brought to you in honor of the last ten minutes of Chris Sims' birthday, Central Time. There will be more Rocket Awesomeness to come in the future.)
Posted by Ragnell at 12:50 AM 5 comments: