There is a huge development in this issue.

And I mean massive here. One of the primary reasons to use the internet as a comic book fan will disappear forever if this is true.

You see, they bring back something which has no been seen for a long time yet. Something that, in its absence, has fundamentally affected every DC reader's enjoyment of the story at some point. Something sorely missed by nostalgic fans.

This something will make comics more accessible to new readers while it panders to the long-time fans.

I'm speaking, of course, about..

You have a better idea?

I was forming ideas for a post on Green Lantern/Green Arrow #82 when I noticed something unusual. Well, something unusual when you're used to modern DC comics. Something missing even from reprinted collections.

It was a letters page.

I couldn't resist a peek, so I glanced at a few of the letters. One letter, from a man who hated everything except for the art, stood out to me. 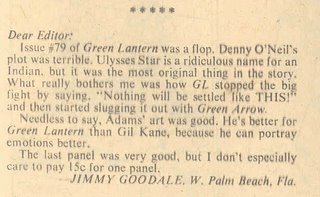 What really bothers me was how GL stopped the big fight by saying, "Nothing will be settled like THIS!" and then started slugging it out with Green Arrow.

There may be something wrong with me, but I honestly can't think of a better way to stop a conflict than by taking out Ollie Queen.
Posted by Ragnell at 6:55 AM 5 comments: 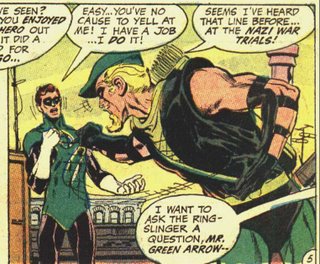 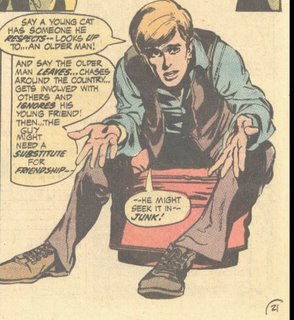 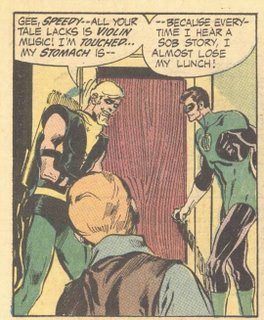 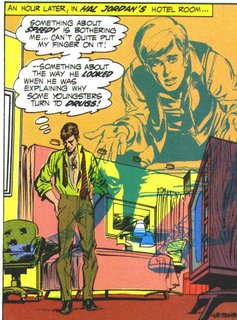 The proof is in the panels, ladies and gentlemen. Green Lantern is seriously the smarter member of the team.
Posted by Ragnell at 5:21 AM 13 comments:

Carnival of Feminists 11/Call for Submissions for 12

Carnival of Feminists issue 11 is up at Angry for a Reason today. Check it out. Then come back and see the commentary on the below picture: 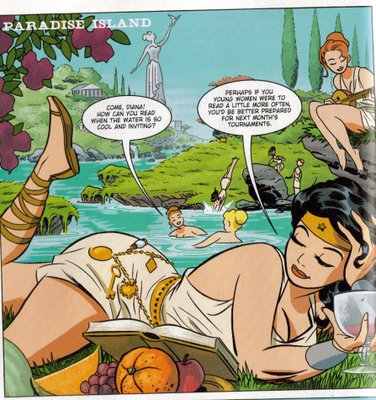 I'll be hosting the Twelfth Carnival of Feminists at this very blog on April 5th (Before I read Infinite Crisis #6 even. It'll be a slight change of pace for my regulars since this isn't normally a political blog unless it crosses into comic books, but it doesn't hurt to visit the real world every once in a while

Requirements: Any posts written to address a woman's place in the world from a feminist point of view are welcome. The optional and arbitary catergories for this issue will be Influences, Inpirations, Culture Reversal and Other. Deadline is April 3rd and I'll be accepting posts made after the last deadline of March 20th.

Please email submissions to ragnellthefoul AT gmail DOT com or attach the Technorati Tag carnival12 to your post.

Did he seriously quit over this?

I've been skimming the Isaac Hayes rumors that are flying around not only the blogosphere but the "Respectable" newsmedia. I found the episode YouTubed and linked on someone's livejournal.

I hadn't seen it, but was naturally curious. Was is possible that it was treated with less respect than the major organized religions? I mean, the Mormons got smoked. Maybe there's a reason to be offended. Maybe people are massively misunderstanding Scientologists. My own religion embraces some fairly kooky stuff. It has questionable origins. Who am I to judge?

So, I did try to approach this objectively. Two items did me in.

I'd forgotten what the E-meter was. I've read about the little black box before and was under the impression that it was an unreliable medical tool (In Cults of Unreason I remember reading that shortly after Hubbard began using it, the regular medical community stopped using it) for measuring body temperature and pulse. Good thing I googled it. It's really just an Ohmmeter for your flesh. Now, I must confess I do believe in a lot of New Age and mystical stuff, but I also work on electronics and I can't imagine using test equipment to try and pin down the metaphysical without learning what it's doing and what causes it to do that in the natural world. I think it comes from having to actually read up on all that stupid test equipment in case I actually do need to know how an Ohmmeter is measuring resistance to account for a bad reading. This knowledge about the E-meter threatened to melt a part of brain when I saw it.

I survived that mention, only to have my brain turned to mint jelly around the time they said "..looked like DC-8s.." You see, I've been in Aviation longer than Electronics. I couldn't handle that, and the accompanying animation didn't help.

I had a nice Green Lantern essay in mind, but am unable to complete it because of this experience. While my mind recovers from the shock, see for yourself:

The South Park Scientology Episode.
Posted by Ragnell at 6:33 AM 15 comments: 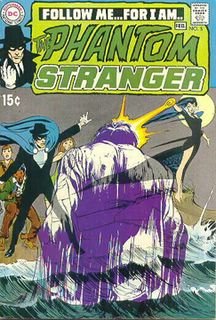 Well, I found out from Chris of the Two Guys about the DC Press Announcements made at the last convention. One of my favorites, the Phantom Stranger (he is on my SureSell list, though I unforgiveably forgot him until I saw this news) is in line for a "Showcase issue." Now, if this means a Showcase Presents Volume (which I'm all too ready to believe for my own gigginess) I'm amazingly excited. I'm already rubbing my hands together greedily. I can just feel that weighty paperback in my hands, filled to the brim with black and white mystical goodness.

(If it's just a single issue, I still want it. Right now.)

-- All Star Wonder Woman is vaguely hinted at, but nothing is overtly confirmed.

-- Jack Knight (Starman, retired) is promised to appear in 52.

Asked if Kyle Rayner would get a new girlfriend, Didio joked, “First we hope he gets a new mask.”
-The next few moments were spent on jokes about the high turnover of Kyle girlfriends, with the highlight being comparisons between Kyle’s girlfriends and drummers for Spinal Tap.

(I hope that means he will actually get a new mask.)
Posted by Ragnell at 5:47 AM 5 comments:

Why I Love Zamaron

The Zamarons are the best alien race in the DCU because of their skilled marriage counselors: 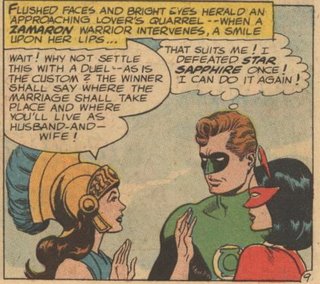