Where: Girls Read Comics (And They're Pissed)
When: January 5th
Deadline for Submissions: January 3rd
Contact: ten[dot]karen[at]gmail[dot]com and submission form

Notice: Accepting Volunteers to Host the 20th Carnival. Email Ragnellthefoul[at]hotmail[dot]com if interested.
Posted by Ragnell at 9:55 PM No comments:

Give up all this?

I fully support any woman who turns her back on the Big Two and makes her own comics, and I sympathise entirely with the frustration and rage that engender that "If you won't change these comics, I am willing and eager to make my own" decision.

The thing is, as a reader, I'm not prepared to cede that territory. White Tiger is *mine*. Power Pack is *mine*. Rogue and Storm and Emma Frost are *mine*. Insofar as they belong to any fan, they belong to me, just as much as to those protesting feminist activism in the comics. And I don't want to write them. I want to read them without being disgusted or wearied or saddened by the sexism with which they are portrayed.

I can't believe that nothing will ever change, when so much has changed already. I have to believe in a future where sexism in artworks, like sexism in general, is considered as outdated and bizarre as a "democracy" where women aren't entitled to vote - superhero comics included. It won't be in my lifetime, but I can do what I can now.

I can support indy creators *and* work for change in the Big Two. Because I won't be satisfied with less.

Karen's answering Tamora Pierce, the latest person to chime in and second Elizabeth Bear's Dear Patriarchy as a call to leave the mainstream and create more entertainment free of the stresses of mainstream gender-based assumptions.

The people who roll up their sleeves and say "Lets just do our own" are people who would probably be inclined to make their way in the published world whether they were satisfied with the entertainment out there or not. They are writers who have stories to tell. That is awesome.

Those characters and settings are legally owned by someone else. That's all right. We want to give those people who own the characters money for stories with them. We want to support them and keep the stories coming.

And there's things that fans love and hate, little directions and fannish things and characters. And then there's the stuff that's bad for everybody. There's the insulting messages, the confining cliches and stereotypes that are nearly everywhere in the world and that slip into these stories with these favorite characters. They piss us off too.

But we would like to give the owners of these characters money. And we know they would like money. So we, as readers and fans and customers tell them what needs to happen in order to keep that money coming.

And some of us give up and go off to make their own stories.

Some of us remember all of that even though we get pissed off at times. And so while we drop series and follow writers and try to minimize the bad as much as possible we don't truly leave. We don't leave because we know the good things will happen again.

And we complain because we know those things would be happening more often, but the company forgets that women are reading too. The company forgets that there's a lot of shit out there in the entertainment world and the real world that's getting called up by the writing and the art that's interfering with the story. Writers and artists forget that when we point that out, we're telling them a better way to communicate with us and get those good moments that keep us shelling our money.

So every once in a while someone tells the mainstream to "Fuck off" because they can write a better story themselves. Good for them. The bad outweighs the good for them, and they feel they're better off working on their own stuff.

Good for us, because we can read their stuff and grow to love it too.

Still, for some of us the good does outweigh the bad. Its just the bad is so pervasive and distracting and just plain wrong that we have to talk about it if we want to have any way of keeping sight of the good.

So yeah, go off and write good stuff. I'll read some of it. I may even try and write some of my own. (I wouldn't hold your breath, but its an idle fantasy many of us have.) But give up reading the stuff I love completely? No, fuck that. I'll continue to enjoy what I enjoy and complain about what interrupts that enjoyment.

And sometimes the industry won't listen, but sometimes it will.

Wow. Wanda can't even cut a break in parallel universe.

Diana is all business: 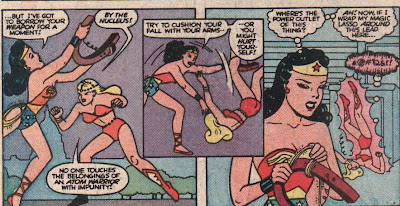 (This one has three parts!)

Part I: Women, Gaming, and You!
Part II: These Things We Love, And How We Interact With Them
Part III: Reviews, Reactions, and Recommended Further Reading

Posted by Ragnell at 3:12 AM No comments:

I missed the episode of The Batman where Hal Jordan showed up, but Kung Fu Rodeo has a few screenshots so we can see how he looked.

Never thought I'd say this, but...

Yeah, I can't believe I stooped to that one (though I'm not sure I remember a Gay Comics BINGO card, I'm sure every argument in that post is on it if there is one). I've been of the opinion that the BINGO cards are good for a one-time laugh, but actually used they tend to be conversation killers, and just off-putting and arrogant. Its an inside joke often presented to an outsider at the offset. Not a recipe for actual learning.

I used to be so thoughtful, I'd break down every argument and engage every idiot -- but there's a point where what you read is just so tired and overused you can't take the argument seriously enough to concentrate on debate anymore. You either want to pound your head against the wall in despair at the endless barrage of blindness or point and laugh at the person who doesn't realize that everything he's said has been addressed and debunked ad nauseum, to the point people are sick of arguing it anymore. The latter option is considerably less stressful.

Trolls often count on the former, and play ignorance long after they should. (And there's the not-exactly-small percentage of the population that simply doesn't absorb this stuff, no matter how often they see or -- or even bother to read it.)

So we'll make BINGO jokes, or something similar. It passes the time and relieves the stress. Some people use them too often and only ever make fun of the opposition, some people don't lighten up and make fun rather than debate often enough.

Its a tool for keeping sane rather a tool for persuasion. In my day job the toolbox has both a hex driver and a scribe, because different aspects of the job require different tools.