So what's really making people feel iffy about our lazy janitor as a woman? I'd say it's simply a matter of what standards have been set already. Really, the problem is that we're just not used to having female characters that don't do what has been already set in our culture as female things to do. And it comes down to, why is the character a girl? People asking THAT, but not ever asking, why is this character a typical white guy AGAIN? And we're so used to seeing men as the stars, that when there's a woman, the rarity calls attention. Calls so much attention that I guess people get more wrapped up in the "why" of that instead of just trying to follow the story.

Another classroom example: In acting class, our instructor drew a big square on the board and asked us to make a character out of it. It was just an exercise in figuring out a character and motivations and goals and all that. Most that were made were male characters, all without any romantic histories or motivations, while the one female character did. I mean, there were some crazy and fanciful ideas for the male characters, but the one girl seemed quite limited to that girl stereotype.

What's happening here is... I guess people are asking the wrong questions. "Why should we have a female character? There has to be a purpose in our character choices! Oh, so logically something significant to this character story-wise would probably be a boyfriend or something."

When these attachments are taken out of a story and we simply have a character that happens to be a girl, it may throw some people off because they're just not used to it. 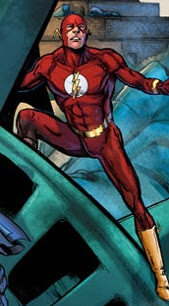 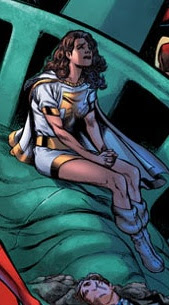 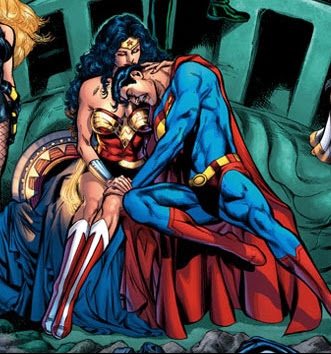 Raquel Ervin and Why I'm Pro-Choice

Today's the 34th Anniversary of Roe v. Wade, so naturally I turned to my stack of Icon issues and dig out the appropriate story for the occasion -- Icon #7, which illustrates pretty well why I went from anti-choice to pro-choice over the last 5 years.

The first thing you need to know about Icon is that is is a very political book. Augustus Freeman IV is an alien who has been stranded on Earth for almost two hundred years. He's very old, very rich, and very conservative. Raquel Ervin is an idealistic teenaged girl with very progressive leanings who convinces Augustus to don a suit and use his powers to inspire and help people. She has a belt that gives her superpowers. Together they are Icon and Rocket, fighting crime and debating human nature across Dakota City.

Early on in the series, Raquel discovers that she's pregnant, and the father asks how she knows its his. Raquel doesn't react too well to that.

So yeah, help from him is out. The family already lives in the projects. Her grandmother all but tells her she won't help, its abortion or adoption. Raquel doesn't think a black baby will get adopted, so as Icon #7 (by Dwayne McDuffie, Erica Helene, and MD Bright), the "Very Special Issue About Abortion" opens, Raquel sees one option to save her ambitions.

Hoping for a mistake, Raquel takes a trip the clinic to get the diagnosis confirmed. After the Doctor tells her that yes, indeed, she is pregnant, she goes off the record. Because the government funds the clinic, its illegal to give Raquel the information she needs, but the Doctor tells her what type of procedure she needs, how long it will take, and that she needs to make the decision quickly for both her physical and her emotional health. this leads to the first revelation of the issue (all issues of Icon of drama and personal revelations that lead to social commentary monologues on Raquel's part). 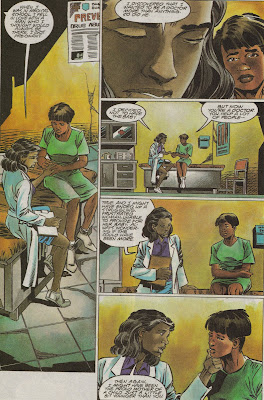 After this, she decides (consciously) that an abortion is the smart thing to do so she goes to Augustus to borrow the money. Augustus, as mentioned before, is very old, very rich, and very conservative. She goes in expecting a denial and a sanctity of life lecture but here's where the writers throw a little twist her way. Augustus was married before. 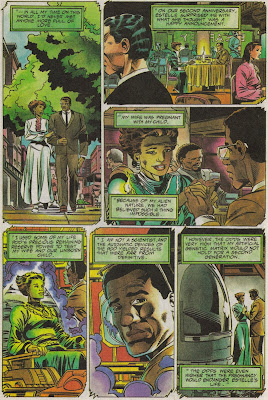 Estelle and Augustus decide on an abortion, and fortunately they had enough money to afford a safe one, by 19th century standards. Augusus tells Raquel that he can't put himself in her position, or judge her based on her choice, but the money is a gift if she needs it.

Raquel does not react well to that. 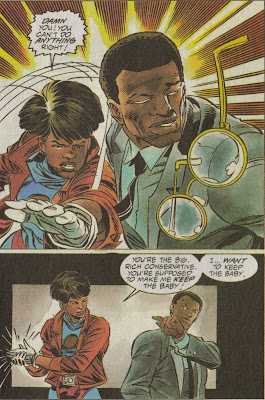 This is when we find out what Raquel's really been searching for. Not money, not options, but someone to tell her what to do. Raquel's at a scary crossroads. She can have the baby and forever wonder what her life would have been like without having put her life on hold for a child, or she can have the abortion and forever wonder what her life would have been like with a little son or daughter. Its such an incredible decision, and both choices have a lot of pain associated with them. If she was denied the money, or the ability to get an abortion, she would be forced to keep the baby and responsibility for her decision would not be on her. She could always blame Augustus if she has to drop out of school. She wants to keep the baby, but she doesn't want to think that she gave up her dreams when she does.

This may also be when I start projecting onto Raquel. See, I've lived my life avoiding responsibility and deferring to other people for even little decisions. I put off college too long, I put off learning to drive until I was forced to, I put off buying a car until my situation become impossible, I put off moving off base and into an apartment until the USAF forced me out of the dorms. Every single step I've taken towards being an adult has been reluctant, and made at the very last moment. Because, at the least moment, its very easy to blame circumstances or other people if the choice you've made was the one you regret. This always made the pro-Choice movement scary, because whichever choice you make, you own it and its a unimaginably huge decision.

Raquel ended up keeping the baby, but she couldn't resign herself to having been forced to make the decision. She had to commit herself to working her butt off to making things work for her, and for the baby together, and if she fell on her face it would all be her fault.

I've gotten into arguments at work with pro-lifers who think that the pro-choice movement is irresponsible. For me, being pro-life and letting everyone else makes my decisions for me is the irresponsible path. Its the easiest path possible, that's why I was pro-life when I was a teenager.

As an adult, I can't be anything other than pro-choice, because adults make decisions. And adults don't make other's decisions for them.

And this issue captures my own view of it perfectly. At the end Raquel makes the choice to have the baby, but she and everyone around her are better off for having the options available that they do, and the right choice for Raquel is not the right choice for everyone and the stories of the Dr. Sidhani and Estelle Freeman illustrate that.
Posted by Ragnell at 5:14 PM 10 comments:

This is Actually Related to the Post I Was Writing

I'm trying to do a Blog for Choice Day post, but today I am easily distractable so I'm not sure how well it'll come out. I seem compelled to be flippant when I discuss Icon. I think its the overwhelming joy of having such a pro-Feminist superhero comic in existence, even if it is long since concluded.

In the meantime, please enjoy Raquel "The Rocket" Ervin punching some dude in the face.