There's a Dwayne McDuffie interview up at Wizard.

Who are some of the villains involved?

MCDUFFIE: Just like the core of the Justice League is Superman, Batman and Wonder Woman, the core of this organization is Lex Luthor, the Joker and Cheetah, and they’ve brought a lot of help.

Any Wonder Woman villain who can be categorized as Not Circe at this point is a welcome sight.

Will there be any new members of the League, and if so, can you give any hints?

MCDUFFIE: At least one new member. Well, anybody who has seen “Justice League Unlimited” knows I like [Green Lantern] John Stewart, so I wouldn’t be averse to opening up that big, ugly can of worms.

(I knew it had to be Meltzer demanding to play with Hal that kept John out of the JLA.)

More news from the con front:

And the question is answered. Since he started his run on the series with #0, Brad Meltzer made no secret that his run as the writer on Justice League of America would end with #12. And that’s in August.

So – who gets the job next?

Dwayne McDuffie, longtime comics writer, and perhaps, best known in JLA fans view as one of the writers on the animated Justice League Unlimited series. McDuffie will start with the JLA Wedding Special in September, shipping just prior to Justice League of America #13, with art by Joe Benitez (regular series artist Ed Benes will return on the series with #14).

Okay, the Wedding Special looks like its going to be about the worst couple in comics since Nightwing dated Huntress (seriously, there had better be mind-controlling aliens involved if Dinah's actually going to say yes to this guy), and Boobs Benes is still going to be on art, but Dwayne McDuffie is writing and he has plans. (Emphasis mine)

We’re going to shift the team a little, partly because the team that Brad set up is a huge cast, because Brad wanted to work with a lot of characters. So, we’re looking to bring things down to a more manageable size, we’re going to bring other members in also, and bring in that sense of high action and high adventure again – bring the big scale feel back in to the book. Brad did such a fabulous job on the book in telling a very personal story which established and reestablished the bonds between these characters, so we felt it was time for a little bit of a tonal shift and we’ve got someone who understands the workings of the DCU to do it, which will allow for the book to interact with a lot more titles now, because of Countdown and what we have planned for the year.

I take back what I said yesterday. DC must love me.

DC Comics, why must you torment me so?

As announced by Dan Didio and Bob Wayne in Philly and Heroes Con, respectively, next week's Flash: The Fastest Man Alive #13 will be the last issue of the young series, which was just launched last year. Although DC is keeping mum about what happens in that pivotal issue, its story will act as a precursor to the announced return of Mark Waid to The Flash beginning in the fall with penciler Daniel Acuna (Uncle Sam and the Freedom Fighters).

Okay, on one hand, this is Mark Waid. I started reading The Flash during Waid's run and I am firmly in the camp of people who loved that run and would be interested in seeing if he can recapture that. I never thought I'd drop that comic. (Until, of course, this series happened and I just had to. It was too painful.) To me this writer is not a guaranteed hit (I much preferred his 90s LSH reboot to the current one, for example) but definitely work a look.

On the other hand, its going to be drawn by Daniel Acuna, an artist who draws comics that I find only slightly more visually appealing than the slides accompanying the STD briefing at Keesler AFB.

Some days, I think DC editorial is personally out to get me.

David Brothers has a great post up in defense of Joe Quesada called Joe Q: Villain or Menace, and I must admit that I liked the guy as the EiC when he first took over.

I'm sure you all know my current feelings about the editorial Marvel.

I can't agree entirely with David's take on DC's handling of women vs. Marvel's. Comparing Storm cold to Wonder Woman isn't really fair (especially since Storm's handling in her home book, Black Panther, is not really hetr book, or even her home book, and isn't an impressive use of the character. Wonder Woman has been consistently a force to be reckoned with outside of her book, despite editorial flounderings with the title itself. She's at the forefront in heroic society.) The issue is far more complex. Why not take Sue Storm, Spiderwoman, Ms. Marvel, She-Hulk, Scarlet Witch, Power Girl, Black Canary, and Manhunter (which is uncancelled, thank you David) into account? How about Lois Lane's treatment vs. Mary Jane's? And for Spiderman loves Mary Jane vs. Supergirl, we have Birds of Prey vs. Heroes for Hire. And DC just hired McKeever, didn't they?

And before I get called a DC apologist, there's Jean Loring, Spoiler, Black Canary and Green Arrow, any Green Lantern girlfriend, Star Sapphire especially, about a third of the posts on this blog are about DC idiocy.

Point being, both companies have excellent moments and moments of stunning stupidity. But this is before work and I don't really have time to get entirely into it.

I will give him that John Stewart in the background is fucking stupid.

Anyway, its an interesting post. Go read it.
Posted by Ragnell at 2:11 PM 7 comments:

As long as I'm mad about Countdown.

Still no substantial Kyle either. I'm going through withdrawal here. The fucking nerve of you guys, to have a 12-issue maxiseries which ends with a fucking advertisement for a book that's not going to come out for two months and shelve the character until then.

I swear, if Kyle dies because you felt his sales were too low after you went and gave him the stupidest name Winick could come up with as an official name then marketed his book under that stupid name with an unwieldy set of powers and used the brand name on two other books but not his I am camping outside your offices, DC. In my nerdy Green Lantern shirt. And harassing your editors.

(Granted, it'll be on a day trip home to the Northeast. But I'll have my equally loud and annoying sister with me!)
Posted by Ragnell at 4:03 AM 5 comments:

In which Ragnell realizes she is 3 weeks behind on Countdown, and catches up.

You killed a Kirby creation?

Buttmunches.
Posted by Ragnell at 3:58 AM 6 comments:

They can't mean anyone I know.

Most of the female readers I know would've joined the Hulk vs. Spiderman argument.

That's not a runner's butt.

Shelly dug this up: 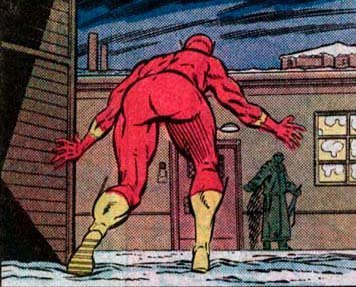 I call foul! Must be a trick of the panel angle. A guy who spends that much time running would be much more toned.

Now that its quiet enough that people can read more closely

(People meaning me, of course)

Takeshi Miyazawa's description of the cultural snafu, which I've just now (that the whole thing's died down a bit) had a chance to read thoroughly, tells me much more than I want to know about Marvel's art policy (Emphasis mine):

I drew the previous cover to Heroes for Hire and was asked to choose at least two girls out of the cast and draw them as sexy as possible so, naturally, I did.

If there is one thing that everyone should take away from this, its that using "sexy" as the defining trait for a character (and seriously, if that's all that is matter that a character be drawn as in the cover, that's a "defining trait") is a stupid idea.

Edited to clarify: This interview is from an artist who drew a previous cover, relayed the instructions he got, and described what probably happened with issue #13. I quoted him because I felt the art instructions he repeated were extremely important and the whole point of Miyazawa's post was that by Japanese standards, that cover was attractive so I didn't want to get into the cultural differences of what's sexy and what's creepy, but instead wanted to point out what Marvel was telling their cover artists to do.

If the phrases "strong, aggressive, brave, or heroic" were used instead of just "sexy" there may have been a very different cover, but we can only conclude from the end result that none of those words were important enough to be used when communicating with the artist from another culture who had never seen the characters before.

So who lost sight of the idea that these were 3 kickass women, Joe?

(Just a little reminder of what Hal Jordan was like in his first appearance. In case anyone forgot that he was meant to be an ass.)

(Yes, that woman was the main love interest.)

Oh, and Greg Rucka needs your help.
Posted by Ragnell at 2:02 AM No comments:

Why is every blogging panel at every convention in the morning?

Aside from that, Soonercon has been great. I bought a bunch of old comics, toys, and books. I got filmed for a public access horror show. I got compliments on my Wonder Woman shirt. I didn't place in the costume contest (I was the Power Girl) but I got a ton of compliments on the costume. I got to rant about comics to a bunch of different people. I ran into friends I haven't seen in months. Got one friend's kid to take pictures for me, so I actually have pictures of me this time. Also, his mother showed me how to work a part of my camera that had been a mystery up until now. I ate chinese food in a superhero costume. I saw the last hour and a half of Hogfather (Susan Death: Even more badass in live action).

Unfortunately, because its local and I'm too cheap for a hotel I have to get up twice as early to get to a morning panel I'd sleep through if I was staying in the hotel.

(Oh, and for those keeping the tally of these things, Soonercon did nothing to break my streak. I actually noticed three times as many come-ons at this con as at any other. I think its because people at this con is more likely to be local than at the others.)
Posted by Ragnell at 1:39 AM 1 comment: