On the Power Girl Cut-Out Costume

Yeah, Esther's right on the money here. Quit with the stupid justifications. No one buys it.

That said? I like Power Girl's cut-out ("boob window") costume. It was stylish when she was introduced, and now it's retro. It's actually very classic looking and when originally designed it was actually pretty classy looking too. The design is just plain good. The design is actually great, I'd say. I'd wear it if I could pull off white myself.

That's why they keep going back to it, because it's a good basic costume and as it was originally just a small cut-out on an invulnerable character it's not inherently lewd/impractical. (Unlike the midriff-baring Huntress, or the monstrosity Carol Ferris is parading around in--though my hat's off to Mahnke for making it less eyesearing.) All the attempts to change it have had her going to worse costumes. (The one with the normal neckline actually tends to show even MORE boob than the cut-out.) And it doesn't need a reason any more than she liked the look better than any emblem she tried to put there, and now she's just used to it. Anything beyond that is downright insulting, like you're trying to fool us into thinking there's something inherently empowering about baring your breasts. There isn't.

(We all know good fashion isn't dependent on the amount of fabric. Different cuts do different things for different bodies. And that's not even getting into color. Aesthetics are complicated in this area.)

Now, if DC feels guilty enough that they feel a need to justify this costume, maybe rather than offer us some bullshit they can have the artists draw it tastefully. A cut-out is ideally supposed to offer just a hint of cleavage, not go down to or below one's nipples. Just a guess, but that and the annoying high-cut bikini bottoms might be where all that guilt and disgust originates.
Posted by Ragnell at 11:31 PM 4 comments:

I did get the comics shipment with Green Lantern Corps #42 today. And I actually got it in time to review with a spoiler warning.

My interest in this crossover is completely renewed, and all of my earlier worries about Kyle being sidelined for the Hal, Carol and Sinestro show have disappeared.

That's right. I am a Kyle-fan, and I say that this was AWESOME.

Seriously, if you're going to do that, THAT is how you do that.

It's really hard to kill off a character I adore and fill me with unbelievable joy as you do this, but they managed just that. I may just be unfazed because of the nature of the crossover, being that the dead are rising from the grave and there is almost certainly going to be resurrections at the end, or maybe because Kyle is on the cover of an upcoming issue (though that could be a red herring, or a figurative image). Plus I'm thrilled because they use this as the final page of an issue in the middle of a huge crossover, so anything can happen next issue be it horrific (Kyle as a Black Lantern, or something worse), miraculous (weird effect of that energy mix or stuffing one of the color critters inside him--Ion and Parallax are both accounted for, but I imagine the blue one would suit Kyle), or heroic (you can't tell me Soranik doesn't know something along the lines of CPR).

I might also be desensitized. They have been fucking with us since the RUMOR of Hal Jordan coming back came out, and they know just the threat of killing Kyle always sends the fanbase into a complete frenzy. It doesn't offer the mainstream press of killing off Captain America, but this is a good way to catch the community's attention. Still, this doesn't feel like a stunt. It was unexpected, but suitable. A stunt gets hyped to death beforehand, and ends up not being very emotionally effective after all the press. A stunt is something your roll your eyes at and yawn about. A stunt tends to be a disruption in the narrative. This? This was a surprise, because they hadn't breathed a word of it, but still a natural step in the story.

It suits the character. This is the way that Kyle Rayner is supposed to die. Trying to save the Central Power Battery and all the lanterns on Oa, in an explosion of green, destroying a large number of enemies, with a splash page of his fallen body lying in the snow (or ash?) at the end. To boot, his death itself is a refrigerator death and is going to throw the other two main characters into a cycle of angst.

It suits the franchise. This was thematically perfect. The Torchbearer, the guy who kept everything going after Emerald Twilight and relit the fucking battery and brought Hal back, dies in the middle of the Blackest Night--the prophesied end of the Green Lantern Corps? It had to occur during this. And like when he was the target at the start of the Sinestro Corps War, it underscores his in-story prominence. Hell, it cements his role in the whole mythos as the King piece on the Guardians' chessboard. This is twice now where Kyle getting checked (once again, death is not necessarily a checkmate when the name of the show is Zombies... in... SPAAAACE) marks going over the edge on Oa. This means morale is toast, and the hero you follow in the plot is the one who has to keep things together and get the King out of check.

And even though half of the teamup I've been wanting since the buildup to this crossover started is at the moment dead, I'm more convinced than ever I'm going to see it.

I had my doubts when I heard Tomasi was leaving editing to take over as a writer, but damned if he hasn't made this the best book of the franchise. This is seriously impressive, I would think I'd be turning red with rage but instead I'm rambling happily on my blog about how suitable it all is and how it relates to chess. And I'm dying for the next freaking installment because this Green Lantern Corps plotline is just kicking the asses of both the Green Lantern and Blackest Night mainbook plotlines.
Posted by Ragnell at 9:37 PM 2 comments:

Can you identify this piece of underwear?

Prior to moving to Germany, I bought the most wonderful sports bra that I have ever worn off the rack in a cheap chain megastore. After several months of picking through European sidestreet stores and AAFES stock I am unable to find anything that fits quite like it. I'm forced to search online stores and mail-order catalogs for the same model of bra.

Here I get into difficulty, because there is no little embroidered manufacturer's logo on the bra itself. To further complicate things, the label that tells you the model name, manufacturer, and size for the bra is faded beyond recognition. It (and I'm not sure if "It" is a manufacterer, model name, or size) begins with an "X". I know the care instructions, and the material, but I don't know who makes the bra or what it would be called. I also don't remember which cheap megastore stocked it on the rack. I have only two of these bras, and neither label is decipherable. They are beginning to show signs of wear, so in my hour of need I turn to the wilds of the internet. 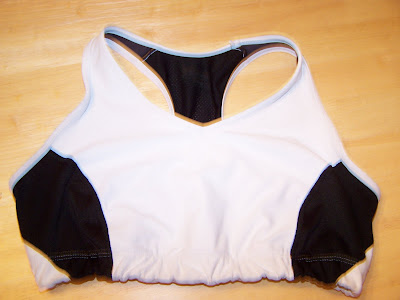 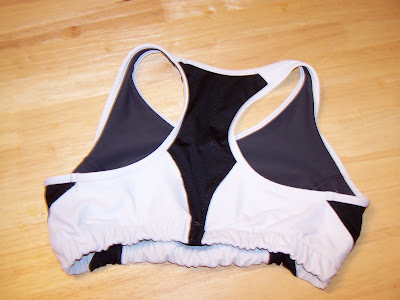 Here is a close-up of the label:

Pardon the lens flare, but this was the best I could manage. I'm no catalog photographer. You can at least make out what I can: an X and space for maybe five letters after.

The material is 88% polyester and 12% spandex. The non-mesh parts are double-layered solid fabric, white on the exterior and black on the interior. The black exterior parts are mesh.

Please, if you recognize this bra, contact me in the comments. Any information that can lead to the purchase of another one of these sports bras would be greatly appreciated.
Posted by Ragnell at 8:51 PM 8 comments:

Labels: not comics, spambait, the very last thing I thought I'd ever post on the internet
Newer Posts Older Posts Home
Subscribe to: Posts (Atom)