Okay, that was very fun. I like that they did and still kept everything intact. This will come back to bite the characters in the ass, though. I'm pretty sure that the mystery guy -- the one of the three who had the tech for everything to be possible -- will be revealed to be a bad guy in the near future.
Posted by Ragnell at 11:51 PM 7 comments: 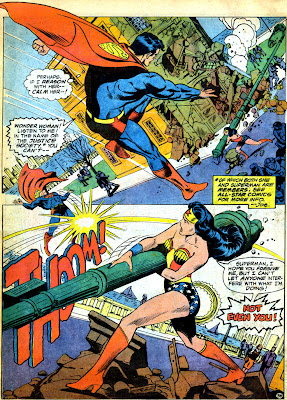 Well, this could be interesting.

On a scale of 1-20, how pissed off do you guys think the final product would make me?

Far be it for me to denigrate another member of the online comics community, but there are some things that just look strange and should be pointed out. I freely and fully admit that I've reacted to other fan complaints by asking incredulously if the other fan has actually read the work in question (or if they indeed know how to), and I don't see it as a question that off-limits when you find your interpretation of a work (and the tropes of the genre) to be remarkably different from another fan's reading.

But really. From whence comes your indignation, internet? Have you never read a Wonder Woman comic? Ever?

If you ask that question (even rhetorically) and the first post you link is by someone who has written the comic book in question, you look stupid.

And it doesn't help that Greg Rucka shoots down your main point in the comments of that first link.

The Wonder Woman direct-to-DVD animated movie is being cast:

Well, no firm release date, but the voice of Wonder Woman will be provided by Keri (Waitresws, MI: III) Russell, according to TV Guide’s Michael Ausiello. According to Ausiello, Russell is in “advanced talks” for the role in the animated feature, which is tentatively slated for a late ’08, early ’09 release. Russell was a favorite choice by many fans for the lead role in a live action Wonder Woman movie before said potential movie sank beneath the waves.

According to the original information Newsarama received in August, the Wonder Woman animated feature will be rated PG-13, and is described as follows:

On the mystical island of Themyscria, a proud and fierce warrior race of Amazons have raised a daughter of untold beauty, grace and strength – Princess Diana. When and army fighter pilot, Steve Trevor crash-lands on the island, the rebellious and headstrong Diana defies Amazonian law by accompanying Trevor back to civilization. Meanwhile, Ares (the god of War) has escaped his imprisonment at the hands of the Amazonians and has decided to exact his revenge using the mystical “Hand of Rage,” an ancient artifact with the power to raise armies from the dead and infuse them with a thirst for blood. Ares intends to start a world war that will not only last for centuries – but will wipe out every living being on the planet, starting with the Amazons! It is up to Princess Diana to save her people and the world – by using her gifts and becoming the ultimate Wonder Woman!

Russell will be the second actress to portray DC’s Amazonian princess in the company’s direct-to-DVD features, as Lucy Lawless is providing the character’s voice in JLA: The New Frontier, due for release on February 26th.

Well, I'm going to try and be optimistic about this one. I liked Superman: Doomsday.

They... umm... They misspelled Themiscyra in the press release.

I need a distraction

(This'll be my seventh post, counting all three blogs, on this subject, but by now I'm pissed off. For the record, I wouldn't be posting so much if I hadn't made that resolution to post once a day.)

I was doing so well until I remember that artist who got a C&D notice over Batman. Then rage at the double-standards for male and female characters combined with rage at the fact that a lone artist gets bullied by WB goons but a big magazine like Playboy can get away whatever the fuck they want to really unsettle me for the whole night.

And the thing that kills me is once I chased Levitz down after a con panel to ask why Swamp Thing couldn't be in both DCU books and Vertigo books, just with different continuity, and he told me that he wanted to keep the all-ages books separate from adult books, so they try and keep the characters in their own imprints.

But apparently it's okay for an all-ages character to be on the cover of Playboy.

(Continuing from my thoughts here and here)

1) For people who think I'm giving Playboy too much credit, Greg Rucka gives them more:

And, for those of you who consider such things, take a look at the banner on the Ms. cover. "Wonder Woman for President."

Do you really think it's a coincidence that Playboy chose this year, the issue for the month containing "Tsunami Tuesday," to run this particular pictorial? Do you really?

(ETA: But that's not the main point of this post. I'm not sure I can give Playboy so much credit for forethought. Still, another coincidence for the list has me trying to shake the crazy thoughts out of my head: the article is "Sex in America" and has a poll on voter sex lives and the upcoming election.)

2) DC has long complained that Wonder Woman just doesn't sell as well as it should.

Well, the original target audience for Wonder Woman was little girls. And here I'm about to have some commenter who has never read the Golden Age Wonder Woman stories pop up and tell me that she was created as kink material. Well, I've read the archives. I've read the interviews. Marston was kind of a nut (he was clearly turned on by female supremacy), but made her to draw in female readers. Check out the archives, guys. Read some of that old Marston stuff before you condemn him as nothing more than a creepy fetishist. He didn't have his bondage kink interfere with the ability of the reader to see her as inspiring, heroic, or strong. It wasn't humiliation and degradation. He wrote fun goofy adventure stories and rope tricks. He uses getting tied up a lot, but her main weapon was a lasso not a gun or a sword. It doesn't stop readers from seeing Wonder Woman as someone they want to be. He wrote a hero first.

The current target audience for Wonder Woman is not little girls. It's not even women. It's so hard to convince a lot of female readers to pick her up because a lot of people just think the character is nothing but kink material (I know a lot of feminists who question her credentials as a feminist character, and go back to that), and always has been. And stuff like this cover perpetuate that myth.

Problem with that is that the character's iconic traits demand that she be more than fetish material, so writing her that way just doesn't work. So people who go to her book for fetish material very likely put it back down too.

Basically what she has is a small core of highly dedicated fans who have loved her forever and were introduced through the television show, or their mother, or accident, or through a highly dedicated fan who went out of their way to show she wasn't just fetish material. While people outside of that small group of fans just write her off and resist reading her.

If they're smart, they'll put their foot down and try and reclaim that image. Pink Raygun (NSFW) asked if we'd see a model as Batman in the same sort of thing. The answer's no. You won't see Batman in paint on the cover of Playgirl because DC protects their copyright to Batman, and goes out of their way to stop sexualized images of Batman. The character is money to them, they want to control how the public receives him.

Well, Playboy is considerably higher profile than the linked watercolor artist. But we don't see thing one from DC Comics about this cover.

If Warner Bros had any brains they'd realize they had the iconic female superhero in their company, and do something to prevent the public from randomly writing her off as someone's fetish.

Is it okay this time because Playboy is "Tasteful" (which could mean a) it's okay when it's done to women, b) it's okay because it's heterosexual, or c) it's okay because they have lots of money and have been around a while) do they just not give a damn about Wonder Woman?

I've been watching episodes of JLU this weekend, and I finally got to see the Once and Future Thing, where there's a time shift and John is replaced by Hal for a couple of scenes.

It's a really cool bit, because Hal steps right into the plot, and answers everyone's stares with "Another time shift. I'm Hal Jordan, I'm up to speed. Carry on." John doesn't miss a beat when he comes back. They're so natural about it.

They did this with Kyle and Hal in JLA/Avengers, too. I think I've seen it in a few other JLA stories. There's some sort of DCU law where for the purposes of a time travel story, any Green Lantern can replace any other Green Lantern, and they won't be fazed or confused by this.

I swear I've seen this in almost every time travel story where a Green Lantern appears. We can only hope the entire GLC never gets together during a time travel story, because the readers wouldn't be able to follow the scene with everyone changing positions. I imagine the characters would laugh it off, though. (It's all fun and games until someone get replaced with a Parallaxed version of themselves, after all.)

They try to do this with other characters, but it works best with Lanterns for the variety. I mean, you have 4 Earth-based Lanterns running around as it is. They've all been with the JLA at once point or another, and given the trouble with Earth it's reasonable to assume that any version of the JLA would have dealings with the local Lantern. Even going before Hal you have Abin Sur (and if you screw up the timeline enough, Donna Parker or Carol Ferris would work) and after Kyle there would be any future Lantern idea you could come up with. You can just randomly throw an alien in there from either way.

Anyway, there's not much point to this post. It's just a fun trait of time travel stories.