Before this gets out of hand.

I've noticed a small amount of griping about the posts here and here. I've no doubt that this will turn into a large amount of griping, so I may as well wade in here and say I agree that there are people placing fan entitlement over feminist critique in our little community of the blogosphere.

I may be wrong that this will turn into a New Year's Flamewar. The last time I touched on this subject I didn't get the shitstorm response I was expecting. Of course, last time I didn't single anyone out, so here goes.

I've seen a Green Lantern fan complain that Jade's death was sexist because it was unfair to Alan on the Comic-Bloc forums.

I've seen a flock of JLI lovers attach themselves to Girl-Wonder.org and seize on every opportunity to trash DC, which I simply find suspect. I know that there are very passionate feminists who also love JLI, I liked the series myself, but when I see constant personal attacks against Didio and Johns that keep bringing up the body count of Giffen's old Justice League but don't see the same people engaging in the more in-depth feminist debates, I'm a little suspicious.

And I know a comics blogger who comes up with endless justifications for her hatred of characters such as Donna Troy and Jade. She claims that they, at their very core and in their concept, are anti-feminist by nature and should die horribly to be replaced by better female characters. (And Cassie Sandsmark, but I haven't ranted about her on this blog yet.)

Look, this is superhero fandom. We're naturally obsessive, possessive, and only marginally sane at best. Fans who don't want anything bad to happen to their favorite characters have been latching onto pseudofeminist critiques since the Fridge List, and they aren't going to stop now. Its hard for any fan-rant not to look like "Bring Hal Jordan back or die" with that image in the reader's mind.

The best anyone can do is offer as well-thought out and reasonable an argument as possible, with plenty of social theory to back you up. It never hurts to go for the common sense argument.

Now, I do have to weigh in on the other controversal statement Dorian made in that paragraph. The Memorial Case Campaign. I don't see overt sexism on DC's part. I do see inherent sexism in the Bat-verse, and the setup of the characters. I am absolutely certain that piles of letters from fans about wanting a better portrayal of female characters is a good thing. Whether you feel its in character or not for her to get one, it lets them know that women care about what happens in the books.

Because everyone has to do it sometime.

And because I finally got around to playing with that camera Mama the Foul got me for my last birthday. I'm gonna try this Friday cat-blogging thing.

This is Knight. Feel free to caption. 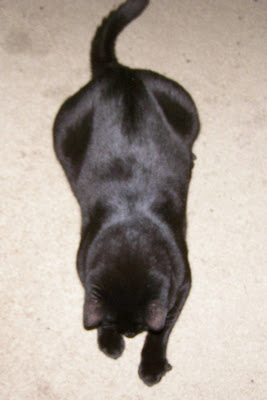 I've been namechecked. (Sort of)

Sarcasm and Superheroics: Feminism in the Mainstream Comics Industry.
2006 has been declared the year of Women in Comics. Alison Bechdel's “Fun Home” was one of Time’s 10 Best Books, best-selling authors Jodi Picoult and Tamora Pierce were signed up to write for DC and Marvel, and DC announced a new "Minx" line for girls. However, 2006 was also a year of increased feminist activism in mainstream comics. New websites When Fangirls Attack and Girl-Wonder.org collected and encouraged feminist debate on issues of diversity and sexism in comics, and there seemed to be plenty to talk about. Moreover, the Occasional Superheroine confessional memoir recounted a disturbing tale of abuse and misogyny within the superhero industry that was reflected onto the pages of its comics. What has improved in the comics industry? What is yet to be done? What challenges are posed by the industry's peculiar institutional structure? How can women break into the comics mainstream? How can we critique it? And what comics *can* you buy for your kids?
Suggested by: Karen Elizabeth Healey

My mother got me a few books, including one called Mastering the Art of Drawing. It has a few activities that should keep me busy for a few days. 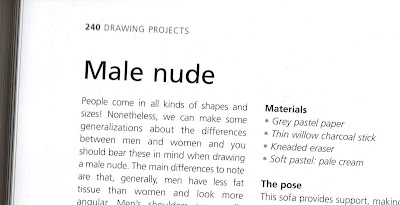 I also have some Robert Heinlein novels to read, so don't be surprised to see some ranting in the near future.

Have a lovely holiday everybody!