When I was a teenager, I remember E! television. Much of it was the same crap we all know today, gossip and awards shows and general stupidity, but there was one really good show there. Mysteries and Scandals, hosted by AJ Benza. I was addicted to that show. I admit it, I like "True" Crime, documentaries and fiction. It's why I took the Criminology elective in High School. We got to watch a lot of those as course material. The first time I saw the Hollywoodland preview on a blog, I knew I'd have to see it as soon as possible. Shortly thereafter, I learned of an upcoming Black Dahlia film.

Today, I ventured forth from my comfortable Subterranean Cave (a lair deep beneath the storm shelters of Oklahoma City) to the movie theater for a double-feature. They were both playing in the same place, and spaced far enough for a lunch break.

I do not regret the expenditure of time and money, but I left the theater saddened. Not in the good, "I just watched well-done tragic story" way. No, this was the "I was feeling down during the previews" way.

You know why? Because each movie had five previews in front of it.

Not a single preview was for a movie with a female hero.

All the King's Men, Catch a Fire and The Last King of Scotland seem to be historically based, so yes, leeway is to be given there. I think out of the three of them there were two female characters, and both was The Girlfriend/Wife type.

Man of the Year is about a comedian who was successfully elected President after campaigning as a joke. Laura Linney seems to be the female lead, his wife (who didn't vote for him). No female campaign workers or politicians of enough note to be shown in the preview.

A Good year is an uplifting story from the viewpoint of the man who finds an exotic foreign love interest as he discovers the true meaning of life.

The Departed (which aired in front of both movies) pissed me off because it's a modern era set undercover police drama with not only no female hero, but no female cops in the background! Not even in the Academy shots!!

And then we get to the last preview, which also aired in front of both movies. It was a post-apocalyptic story where every woman on the planet is infertile (They don't mention whether the men are shooting blanks or not) and have been for eighteen years now. It seems to be about trying to get a pregnant woman from the middle of the country to the coast in a world fraught with violence and danger and desperate people, so she can go someplace safe to have her kid. It looked promising, because they show Julianne Moore coming to get the male hero and enlist him into the cause. But she's not in any of the action/travel shots. The pregnant woman is simply there as a womb, a treasure to be moved from one spot to another. But hey, Moore could still be a hero, right? Well, the overview says One Man and dashes that hope. Oh, and the title is Children of Men.

Most of these are action movies. Not a one of them stars a woman. They just have women there as part of the plot.

And the two movies that I saw? Well, they are historical/true crime fiction so of course, the leads were male.

I liked both movies, they are good movies. I like watching movies with male leads.

Just not all the time.

Remember what I said before about maybe we'd be better off if the Wonder Woman movie wasn't made?

Well, fuck that. We need that movie, and we need it now. And we need it to make a bazillion bucks so that a bunch of knockoffs get made the next year.

Because this year, we got nothing. Movies like The Devil Wears Prada. Or action movies were male-led solo movies with love interests, or team movies with weak-ass token women who surrender leadership to the attractive male loner and misogynistic villainesses. My Super-Ex Girlfriend, a movie about a fucking supervillainess who was basically a romantic interest.

(And Hollywoodland? Bring tissues.)
Posted by Ragnell at 10:51 PM 15 comments:

Nothing new for you right now on this blog. I have an Amateur Art Appreciation feature up, and a couple of posts (Spoilery) on Zamaron, but aside from that I don't have the energy tonight to write here.

If you're looking for entertainment, try here instead, much of the interesting stuff is deleted but you can get the gist.
Posted by Ragnell at 1:52 AM 3 comments:

(Via Blog@Newsarama) Does it make me a bad Wonder Woman fan when I see crap like this and think that I'd rather they not make the movie?

Bilson has already proved her suitability for the iconic part, after she donned a Wonder Woman outfit for a sexy seduction scene in 'The O.C.'. A host of Hollywood stars had been tipped for the role, including Catherine Zeta-Jones, Cameron Diaz and 'Van Helsing' actress Kate Beckinsale, who turned down the part saying she "did not want to embarrass her daughter" by wearing the revealing outfit.

Dawn put it better than me:

Has she displayed strength? Athletic prowess? A memorable character? Perhaps a beauty that’s more handsome then pretty? Does she give off a warrior vibe?

No. She, “she donned a Wonder Woman outfit for a sexy seduction scene.”

Because the KEY part of Wonder Woman’s character, as we ALL know, is her power of sexy seduction.

(Well, I'd go with Great Hera, rather than Oh Frigg)

Anyway, I don't believe it for a moment, because I live in denial. I mean, the mere rumor is my worst fears about the movie come to life, all too plausible given Joss Whedon's confession that he bases his heroines on Kitty Pryde.

I'd rather they shelved it until the patriarchy's been pelted with high heels, then ground into the dirt with sensible shoes than go with a hot looking brunnette with pipe-cleaners for arms. (And if I can't get enough henchwomen, or the funding for that purple death ray, that means it'll be a long time...)

Hal Jordan, from the neck up and not being hit by anything. 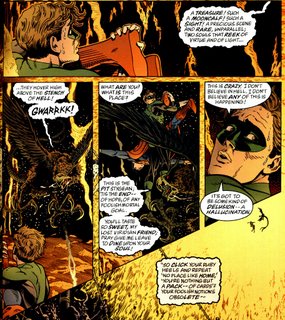 I got my hands on Legend of the Green Flame the Superman/Green Lantern special by Neil Gaiman and a bunch of different artists.

This picture's from a sequence spent in Hell, pencilled by Eric Shanower and inked by Arthur Adams. I'm just especially fond of Hal's face here. The hair is well-done, and so are his eyes. I think I'm attached to the expression right now because of the emphasis on this character and fear. Fear is special when it comes to Hal, so it's fun to see him freaking out. Plus, I just don't like the Van Schiver face that he had for Rebirth, or the toughened one the artist drew at the beginning of Volume III. I like a certain softness to Hal's face.

And in light of the Spectre years, I find his dialogue very amusing.
Posted by Ragnell at 10:20 PM 6 comments:

I was nominated for an Okie. I didn't even know about these. I should pay more attention to local blogs.

I sat down and read Black Panther #19. It was the most enjoyable reading experience of my lifetime. The main event was a confrontation between the Royal Couple and Dr. Doom, which included an iffy sequence where T'Challa ordered Storm to stand down and let him fight it while she was kicking Doom's butt for him. But that wasn't what I loved about this issue. What I loved was the aftermath of the battle -- Ororo and T'Challa's first fight as a married couple.

Ororo's reaction totally made up for it, the look on his face when she interrupted him was priceless. As was the line "I thought you wanted a Queen, not a mindless concubine" and the other line about how if he wanted "window dressing that could kick ass on command" (a bit more Americanized than Storm usually speaks, but hey, she's been in the country a while) he could have his bodyguards for henchmen -- but she was his partner. What others may find corny, but I especially liked, was the speech about marriage meaning that their lives were together, and that T'Challa's difficulties weren't just his own. His enemies were hers also, because they'd agreed to share their lives together. She wasn't there to take orders or to give them, but to make decisions with him, as wives and husbands are supposed to. She was never again going to stand by when she felt he needed help, no matter what his foolish pride had him saying, because no good wife would let her husband go into danger unaided like that.

I thought I loved Storm before this issue, but I had no idea I would be so overjoyed when she gave him the ultimatim. "Marriage for me is an equal partnership, T'Challa. If you don't want to be together on those terms, then we can not be together." That was.. That was beautiful.

The moment of silence, three panels of them sitting together, was perfectly timed. Then T'Challa answered, in a beautiful way.

"It's going to take some time, beloved, for me to get used to this idea, but I'll try." I particularly liked the panel angle on his face at this point.

"Don't worry," Ororo's smile was subtle but noticeable as she said this, "I'll be here to help you."

The art was wonderful, the writing was wonderful. I found myself taking back all the things I said about this pairing before. It could work out. It could be done with respect. So long as they kept to this promise of portraying an equal partnership in this book, they would have a fan in me! It was the best thing I had ever read...

For what actually happened in Black Panther #19, see Loren and the Fortress Keeper.

A meme courtesy of Dave --