At the behest of Bahlactus: 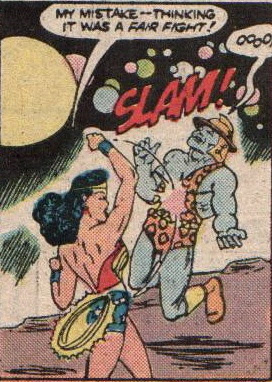 Girl-wonder.org started a blog. Not a column-style one like their normal stuff, but one with links and short posts.
Posted by Ragnell at 11:46 PM No comments:

Criticism is my small way of preventing future bad stories, because I know some of you out there are aspiring writers. Slowly but surely, we can fix some of this crap, one writer at a time. At the very least, we can let off some steam in the meantime.

I'm beginning to think its meaning may not have been as clear as I intended.

More Being Mean to Kyle-Fans

I'm so absentminded sometimes. I jotted down a note about a comment that said "I'm just not sure that Kyle won't be used to fuel angst for John, Hal, and Guy when they're forced to kill him during this" as one of the funniest and silliest things ever said by a Green Lantern fan, but I didn't write down where I saw it. It may have been on Geoff Johns' board.

Either way, it was really funny because there was a long ten year period where Hal and John were pretty much there to fuel angst for Kyle, and it was really silly in light of the premise of Rebirth (Parallax bonded to Jordan's soul so it kept control beyond that grave and tried to twist the Spectre's power), which makes it unimaginable that Hal Jordan would let anyone die with that thing attached to his soul, especially Kyle.

I was planning on digging it up to settle an argument, but now I can't find it. And I checked my comment section pretty thoroughly.

Oh well, Green Lantern #21 is out today and I'm sure there will be a lot of complaining about it and I can find something else.

As much as I'm ranting, though, I am really starting to enjoy the fuss over this one and if anyone sees any really funny complaints let me know.

Well, I was out earlier today searching the stores for that elusive blue motorcycle Dorian described in my Arcee post. I checked every Target in town (I even asked to make sure I got them all) but no on had a motorcycle Transformer. I finally found it overpriced on Amazon.

However, it still has a problem. This toy is a blue motorcycle. Arcee is a pink convertible and dammit, I want a pink car! To that end, I've decided to solve this problem the same way I solved my "No Female Green Lantern Toys" problem.

Well, not exactly. Tearing the wings off of a cheap Tinker Bell doll and repainting her as a Green Lantern (results pictured here) isn't quite going to work this time.

(As an aside I'm rather proud of the results on that one. I had trouble getting her to stand, but that's a makeshift never-dry clay base so I can still change her pose whenever I feel like it. I just wish I could get a decent picture that shows the little GL symbol clearly.)

Now, I know that people buy kits and repaint them and rebuild them and put a lot of effort into it. But I'm too cheap and lazy to get that in-depth. Painting is fun and messy, so I can justify doing that much. (Its also why I like Habitat for Humanity when it comes to volunteer work. They always need painters.) I'm going to need to pick out the right kind of modeling paint for the plastic Hasbro is using, something that won't eat plastic that'll probably need to be redone every few hundred shifts, but I am going to buy one of the car Transformer toys and paint it pink!

Right now some poor collector is shuddering in horror at the thought, but seriously, these toys are under 10 bucks right now and common as dirt.

Unfortunately, no one is a convertible (I mean, seriously, how obvious is that? A convertible Transformer!), but I have this one narrowed down to a few toys. I just need some help to decide which one.

1) Jazz. This one's my first thought because this toy is remarkably easy to find around here. I found a lot of them while searching for the motorcycle. The gray color is easy to paint over. He's also the cheapest, coming in at eight bucks at Target. The problem is his robot form is just a little too far from Arcee for me.

2) Bumblebee. The robot form is ideal and the car form is the next best thing to an actual convertible for Arcee's car form. However, this one's a bit more expensive, a bit harder to find, and the yellow plastic bits aren't going to paint as nicely as Jazz's gray. This one's also getting some poor reviews on Amazon.

3) Barricade. It has the advantage of being the one I would buy two of, because I like my Barricade figure too. Unfortunately, this iss a bad guy and his robot form carries that effect.

4) Starscream. Okay, this one is the most expensive so I probably wouldn't want to alter it. But isn't the idea of a pink jet just pure awesome? And I could always just buy two of this one.

[Poll Closed. Bumblebee beat out Starscream by one vote.]

Anyway, leave your questions, comments, advice, and "WHAT?! NO!!!! WOMAN WHAT ARE YOU THINKING?!!" reactions below!

I'm sure that Judd Winick is a really nice guy when you talk to him. I imagine Brad Meltzer is excellent company. I bet that Will Pfiefer did not intend to offend anyone with anything in Amazons Attack.

That does not change the fact that the comics suck and are often loaded with nasty symbolism and messages.

I love my mother, but she raised me on a diet of super-misogynistic fairy tales that were loaded with meaning and cultural tropes that remain with me and a few million other kids to this day.

I know there are critics out there who see writers with serious issues, but really we're looking at a society with serious issues here. They're in the art, they're buried deep in the culture, they've been influencing us since we were born. They surface at the absolute worst times and they need to be pointed out and faced or else we'll never fucking get past them, and we'll be forever doomed to this living hell of cliched, offensive entertainment that saturates our world.

Criticism is my small way of preventing future bad stories, because I know some of you out there are aspiring writers. Slowly but surely, we can fix some of this crap, one writer at a time. At the very least, we can let off some steam in the meantime.

But before we can fix anything, we have to learn to accept Ragnell's First Law of Criticism:

Quit popping up in my comments acting like I boiled someone's puppy because I pointed out something read really fucking wrong in their story.

It doesn't do anything to change my opinion. All it does is make me pissed off at you.

Since people have actually asked on this one...

I still maintain that Hippolyta has been portrayed as trigger-happy and impulsive since the Messner-Loebs run, and I still adore her for it. (I think Diana uncharacteristically in denial when she insisted her mother didn't act that way, because it contradicts at least 15 years of continuity.)

I also maintain that the Bana Migdall Amazons are unreasonably bloody, have always been violent and would do some pretty awful things during a war, including child-killing.

From the first issue, Amazons Attack could have developed naturally as a compelling drama where Diana has to play peacemaker in a cultural misunderstanding. The concept is sound. It probably would've worked well if written by Rucka, actually.

But the way its shaping up we'll have a Mind-Control/Manipulation excuse by September, and its not even an interesting way to use the plot. That's why I haven't blogged the last two issues of this one, its really not worth reading the crossover unless I need a quick jolt of energy from the rage at Piccoult's dreadful characterization.

Also, in the second issue, when the female pilot (you know, the woman who is an active participant in the war like men typically are allowed to be) is stabbed to death mercilessly but the matronly female tourist (the woman being a helpless bystander like women typically are allowed to be in these stories) is saved by Green Lantern? That's pretty much where Pfiefer lost me.

Bad symbolism. No biscuit.
Posted by Ragnell at 4:33 AM 12 comments: