They got it in where I shop a few weeks ago, but I just noticed it was there for the first time the other day. 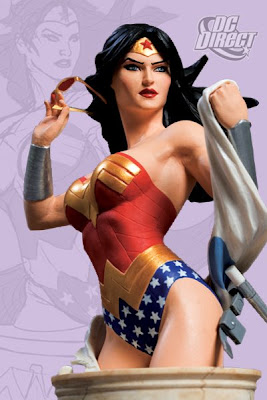 I was going to wait until my tax return came in or my birthday (which is on a Wednesday later this month), but on Thursday I'd gotten a lot of errands done. And I only had one book come out.

And the clerk told em other people had been looking at her. I knew if I waited, she would disappear. So I went ahead and bought the Dodson Wonder Woman statue.

Because I'm worth it, dammit.

Note to all relatives: Send money in lieu of birthday gifts. Don't worry, there's no danger of it being used responsibly.

Labels: day in my life

Can I trust this?

The date is April 1st on that Press Release. But it's not so utterly unbelievable that it would make a funny prank. Of coruse, given the subject matter of the show it might be appropriate to announce that as a prank. I'd be devastated if I believed this and it was an April Fool's joke, because I would love to get my hands on a Freakazoid DVD. It would make a wonderful addition to the "Remnants of My Wasted Youth" section of my entertainment collection.

Yesterday's goofing around made me realize three very important things:

1)  It is fun to write a Milleresque narrative.  It's all gritty and exaggerated and colorful and abusive to the English Language.  Makes you feel powerful.

2) When I start to have fun and really put myself into writing, I get compared to Jack Kerouac and told I'm writing beat poetry.  I must read some actual Kerouac and see what this means.  Maybe I'm some sort of throwback to the Beat Generation. (What's weird is I think that's my father's generation -- Mama's a Boomer, but he's quite a bit older than her.)

3)  That fucking cat came right out of a Frank Miller book.  He whines, he scratches my carpet, he scratches my long-boxes, he scratches my shortboxes, he scratches my arms and waits while I walk to the bathroom and back until he gets a good chance to lunge at me and bite my thigh (he only does this when I'm not dressed yet, so that he gets the flesh and draws blood).  He gets annoyed whenever I change anything in the apartment.  He sits in my chair.  He sleeps on my bed.  He stinks up the place.  He lies in my footpath.  He's sleeping on top of my monitor right now, dangling his damned tail in front of the screen.  He does everything he can to inconvenience me.

And when he's not inconveniencing me, he's sitting somewhere and staring at me, trying to intimidate me.

That furry bastard is out to get me.

If I disappear, you'll all know why.
Posted by Ragnell at 5:28 AM 9 comments:

Today, We Speak the Truth.

A harsh rain. A violent rain. The wind was angry at the citizens of Oklahoma. Possibly over the ancient broken treaty. The Sooner state is cursed with blood and wind and rain and broken glass.

The Sirens went off, and I tried to ignore them. I've lived in Oklahoma. I don't fear death. I'd have walked out and met the Finger of God himself if not for the damned cat. Without me, there would be no one to feed the cat. It was possible the cat wouldn't surive if he didn't get some shelter. I hated that fucking cat. But he was the only companion I had in this damned state, and the only living resident of this rotten world who didn't mind spending time with me. So I holed up in the hallway closet with that stupid cat, a flashlight, and a box of books. I didn't look at the books until I was sitting there with that damned cat, or else I wouldn't have been caught dead with them.

It was the entire run of Sin City. The reprints from when that movie came out. That fucking misogynistic movie.

I'd only bought them because the guy in the comic book store with the indy-goatee and the straggly blonde hair recommended them I read every single one of them, and instead of shadowy light of noirish genius I found the stench of foul cigarettes and that cheap cologne your real grandfather wore when he scammed Grandma into bed by swearing on his then-breathing mother's grave that he was "shipping out tomorrow" and may die in the war. Then he left her with the stench of cheap cologne and a swelling in her stomach that you grew up calling "Mom."

It was nothing new. It was every old man's fantasy in cheap paperback black and white with artsy highlights. It was beautiful deadly young girls tearing their clothes off and throwing themselves at wrinkled old bastards who never showed them the slightest bit of respect. It was women love assholes compounded by women love power with women are sneaky whores thrown in to spice it up.

It was cliche. It was stereotyped. It was a case for gathering a band of merry lesbians and embarking on a cross-country crime spree where you stole from the bastards and gave to their broken-hearted ex-lovers and left a river of masculine blood in your wake as you stayed just a half-step across from a grizzled US Marshall with a tarnished gold star, pecs you can cut glass on and pants tight enough to tell if he dresses right to left from 50 yards away.

And not just because I'd left the air conditioner off.

And that's the secret of these stories. That's the reason for the stereotype. Young women want old men. Wild women are just waiting for a man strong enough to get her to shut up, smack her on the butt and send her into the kitchen. That's why "I'm shipping out" never fails to get you laid. In this world of marshmellowy creampuffs there are far too few Real Men, and it takes more than spitting at quiche to fit the bill, though that's a decent start. That's the deep, dark secret of why we rage at Frank Miller, because baby, he's telling the truth. We want Men, not mice. And if you creamy little bastards with the pimples and the faces so pasty white that they glow in the light of your monitor as you stuff cheetoes into your chipmunk cheeks in your mother's basements learn that that's what we are looking for, then you'll pretend to be a real man and fool some poor weak girl into offering up her uterus for your substandard sperm, thus spoiling the pool for our beloved daughters.

We need real rebels, not cowardly losers. We want men with light, not dimbulbs in the comic shop. That's why old bastards like Frank Miller turn young women on. We know they're tough.

So, in honor of the day, that's the secret of Feminism, boys. It's biological imperitive. It's weeding the weak out of the garden. It's truly only the strong survive in our world. Not just the assholes, but the real heroes. Honestly, if I could make each and every first date walk through fire to climb the gates at the local military base and outrun the MPs over a trail of broken glass, I would. Because that's the way to be sure he's worth the utter destruction of my body and the years of my life spent rearing his squawling brats.

Until then I'll have to settle for spewing my own personal font of rage and hatred at every male member of the species I meet, bedding the one who manages to survive and continuing to test him with the fire of my blood and my soul for the rest of his life, which should be considerably shortened by this treatment.

I do this because I care about the future of our species, and want only the very best genes for my child. As do all women.
Posted by Ragnell at 4:50 AM 23 comments:

How can anyone hate Barbies?
Posted by Ragnell at 5:27 AM 14 comments: