I will never, ever, ever get tired of this sequence: 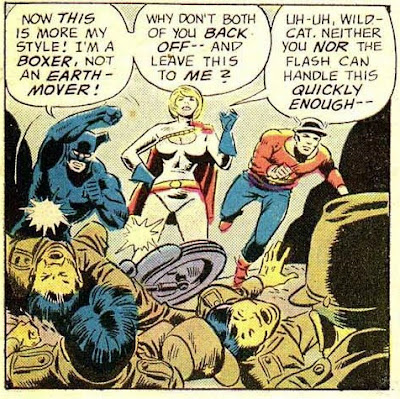 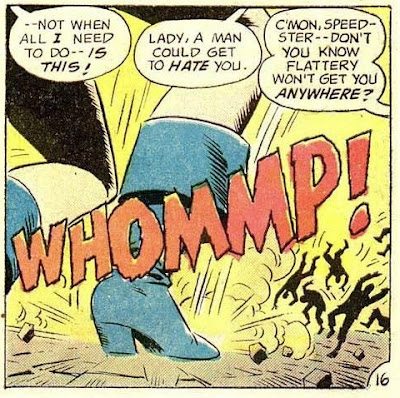 The 14th issue will be held at Heroine Content on May 30th.

And if that's not enough feminist goodness for you, the mainstream Carnival of Feminists is up at KitKat's Critique, and the latest edition of Scientiae is up at Clarity.

Posted by Ragnell at 5:42 AM No comments:

I've been reading the reviews and there are a lot of people (including me) making assumptions on how much of this issue was written by what writer.

I'm wondering, based on your reading of the issue, who you think wrote the vast majority of it?

If anyone is basing their opinion on an interview or posting by a member of the creative team, please link it in the comments.

May's Sequential Tart is posted, and for gamers the first issue of Cerise is posted.

Cerise is also asking for submissions for its June issue, but May 15th.

And if you still have time to read, Planet Karen did a few lessons on "Misunderstanding Comics" the other week, in case you missed it.

Posted by Ragnell at 4:20 AM No comments:

He makes my Steve Trevor argument for me.

This link was mailed to me:

"In the comics, the easiest way to bring real life into the life of the hero is to give him a spouse," said Avi Arad, another producer on the "Spider-Man" franchise.

"Lois Lane and the other women, in the comic books, the woman is the other world that represents all of us, and she is there to support, she is there to demand, she is there to observe and to make you think of her as an ambassador of the rest of us," said Arad, who also headed Marvel Studios, the comic-book empire's Hollywood branch, until last year. "Otherwise, there is never a personal story to bring all of us into the room."

I've said it before and I'll say it again, Steve Trevor can not be replaced in this aspect and we lost so much when they threw him to the background after Crisis.

Steve was the male character who served that role for the iconic female superhero. He's gone now.

That's the point I thought was self-evident that actually isn't.

Wow, Dorian has a lot of friends.

Dorian's latest post answers a question that has been driving me insane.

I only read your blog to forward links to posts to my friends. And then we make fun of you. Because that's all your blog is good for.

I'd been wondering where all those "no referral site" hits were coming from.
Posted by Ragnell at 4:18 AM 3 comments:

The Heroine Next Door is discussing realism in roleplaying games:

Meanwhile, in Gaming Group Two, we're playing a game set in South America in the 1970s. Again, not the most egalitarian society in terms of women's rights. Needless to say I'm the only female player (and character). Am I surprised that the non-player characters harrass and try to flirt with my character, no, not really. Does it have to be mentioned all the time? No. Does it have to happen every scene? No. Would it kill the GM to just lay off? Okay, we get it, the NPCs ignore what I say because I'm female, and only pay attention to me when they want to flirt. Listen, we're playing a game, folks, make believe: can't we make believe that I'm being treated with a bit of respect, can't we stop dwelling on all the sexist crap and treat me like a human, here?

Really, that's what it is about, respect and being treated like a human. In either group, these guys show up to a session and they sit down and have fun gaming. When they leave, they never feel like they've been belitted or lessened because of who they are. They never get made uncomfortable for being male, they never sit there feeling like a hunk of meat, and they never have to even worry about being put in a situation that would make them feel sexually harrassed (I mean, except for Deliverance-type situations, I suppose. But, funny enough, those never seem to arrive). Meanwhile, because I'm female, situations arise all the time that make me uncomfortable.

Its easy to see where this applies to video games and anything set in a fantasy or historical setting.

My response to that is if they really wish to draw attention to the problem of sexual assault and do some good about it, try volunteering, fundraising, or writing a check to RAINN or Men Can Stop Rape. Stick to these rules when it comes to your writing. Because thus far the major comic book companies have managed to flummox at least 99% of the depictions, and those flummoxed depictions are becoming more common nowadays than radiation was in the Silver Age.

They're talking about bringing realism to worlds where characters fly, throw cars across the street, travel to other planets. We're obviously up for a little escape from the most hellish aspects of human existence here. Realism is no good reason to put any part of the plot in.

Funny though, how the weirdness of superpowers is often brought up to support the persistence of dreadful sexist art in superhero comics, at the same time realism is cited to defend the use of rape as a plot point. Now, the same people aren't always using both arguments, but its a fascinating tendency of comics companies to use both in their own defense.

Time to change them.

Moose Baumann has some preview art up on his MySpace.
Posted by Ragnell at 4:50 AM 2 comments: