Is that who I think it is? 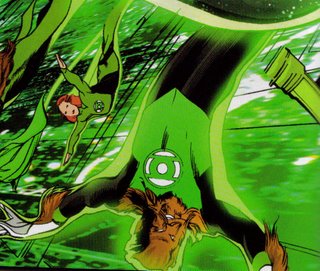 In case you guys haven't noticed the lull in insightful posts here and at my other blogs, I've been a little overworked over the past couple months. My writing seems to be suffering for it. Once I get rested up, things should pick up again.

I just need a chance to get rested up.
Posted by Ragnell at 5:36 AM 2 comments:

Let's put this one to the test.

Name three male characters who have been decapitated on-panel in DC Comics since January 2006.
Posted by Ragnell at 4:09 AM 35 comments:

I can't believe they sent that to her.

If anyone misses that old Monday Misogyny feature...

Here's at least a month's worth. The majority of them are quite proud of it, and probably consider themselves very clever for their old, tired jokes. Granted, there are some decent people commenting there, but the rest of the posters are making fun of them. And it is not a good sign that this inane thread had reached ten pages by the time I saw it.

One repeated answer amazes me. In a community where it is not only perfectly acceptable to dress in tight spandex with a felt mask, but encouraged by picture-taking, we have a bunch of men who are embarassed to go to the store and buy tampons.

Not only that, but its a thread full of men desperate to flaunt their virility and tampons are one of few purchases that prove without a doubt that you live with a real, live woman.

The Fifth Edition of the Carnival of Feminist Science Fiction and Fantasy Fans (Yes, I very much like the unwieldy name, and typing the unwieldy name) is posted at 100 Little Dolls. This issue covers Comics, Webcomics, Writing, Video Games, Television, Anime, Books, the Incident at the Hugos, and Adventures in Fandom!

The Sixth Edition of the Carnival of Feminist Science Fiction and Fantasy Fans will be at The Hathor Legacy on October 16th. The Call for Submissions is out already, here's a quick rundown:

Deadline: October 13th
Submissions: robyn[dot]fleming[at]gmail[dot]com (or use the submission form)
Suggested Theme: Gender: Roles, Identities and Transgressions (This is only a suggestion, however, off-theme posts still eligible under the guidelines will be considered)

Dammit! Why didn't anyone tell me this was up? Popcultureshock's newsfeed is on the fritz, I almost completely missed the two preview pages for White Tiger #1.

They've even got the blurb which I hadn't seen (as I don't really bother too much with Marvel Comics Solicits).

Looks like she's playing off the Bendis Daredevil run. And 40 pages is a lot longer than I expected, which could be very good if the book is very good.

I'm just surprised I had to find this when tracking down information for another blogger. It should have come up in my regular rounds days ago. I mean, is nobody watching to see if this can redeem Marvel for Quesada fumbling the questions about female writers, giving Greg Land work, the Storm wedding, and the Invisible Woman giving her hubby a tumble before leaving him?

Okay, admittedly that looks like a pretty tall order. How about we just hope its good and sells enough to get her more comics work?
Posted by Ragnell at 9:50 PM 17 comments:

Came across the Thrilling Detective website after overall liking the sixth John Taylor book but still wanting to talk to people who hated Shotgun Suzie as much as I did.

And I see that there's only two women on it.

And I can't think of any other woman to add.

Somebody help me out here.
Posted by Ragnell at 5:02 AM 13 comments:

It's especially not funny when an outsider says it.

I hate to see mainstream Feminists discuss comic books. I mean, I used to wish they would, back when I first started blogging, but then the Batwoman thing happened. Then I was willing to pay to get them to shut up. Because the idiotic stereotyping would start. You'd realize just how much they ignored not only the feminist comic book readers hanging around reading them (who were commenting in comment threads), but the very good Feminist comic book bloggers hanging around. I don't mean the criticism for aiming comic books at adolescent boys, but the assumption by the bloggers and commenters that only adolescent boys read comics. The same assumption the companies and professionals are making that's causing the sexism that they are blogging against.

Those blanket insults towards readers really made discussion of the issue over in the larger community impossible (well, that and having to explain things about comic books to a bunch of people who've never read them or spoken to anyone who read them).

One joke, in particular, makes me rolls my eyes. It happens to be in every thread, on every feminist post about comics that leaves the comic book community. I saw it today:

Hrm. And, comic book nerds wonder why they can’t get laid…

And I bet they don't even wonder why Feminist comics bloggers don't comment on their posts.
Posted by Ragnell at 3:25 AM 14 comments: