Along came this old man in a green El Dorado II...

Well, I got my vacation time and it's all settled. I'm going to meet my sister, and my blogging partner Kalinara in Chicago for the WizardWorld convention.
Posted by Ragnell at 8:28 AM 9 comments:

Kalinara and I were working on our new pet project (the one that has me posting so sporadically lately over here), and we figured on gathering any archived Green Lantern posts from our blogs and posting them there. I'm very glad I did, because otherwise I probably would not have looked back at my first week's worth of posts. I made a very important discovery there.

Regular readers will probably recall that, once or twice, I've written rambling emo posts about how my blog has strayed from its original feel. Or, you may remember a rant or two about that subject. I've often worried, quietly to myself, and quietly in text over chat windows, that the feel of the blog has changed too much since I started.

These thoughts have been pestering me for quite some time, actually. But no more, because in the very first week, on the second post which I ever posted, posted on the very first day I had this blog, which is the very first blog I ever used (I hadn't even used a livejournal yet!), in the very first unfocused reviews that I tried simply because the other blogs I'd read had done reviews, I discovered something intriguing.

Take note of my review for New Avengers #9:

New Avengers #9
Notable for a really neat scene with Emma Frost. Emma's inside Sentry's mind, trying to find his false memories. It's very cool to see her at work. I hope Joss Whedon isn't really turning her evil again, but I scanned Astonishing X-Men and sadly, it looks like it. It's a shame. She's a really good character, and I've loved her as a complex heroine since her Generation X days. I was very sad to see this, and couldn't buy Astonishing X-Men because of it.
Then I found this article that talks about her during Morrison's run. Now I'm angry. How is it just as DC is making its goody-goody women more of a presence in their universe that Marvel decides to make one of its most decisive females evil again? How screwed up is that? Especially after the Scarlet Witch debacle!
Plus, it worries me that the writer doing this is set up to direct Wonder Woman. I've got my fingers crossed, though.

And above that, an excerpt of my reviews of Green Lantern #4

Write a whole one-shot about it. Hal Jordan Punches the DC Universe!
I can see it now! Batman! Supergirl! Wonder Girl! Batman! The Joker! Lex Luthor! Batman! Dark Seid! Lobo!
He just tours the whole DCU hitting people, until he gets to the JSA HQ -- where he swings at Alan Scott--
And finds his hand stopped in mid-air. "Hal, we have to talk."

That would be beautiful, just beautiful.

If I should ever again start to complain that this blog is losing its way by dwelling too much on either of these subjects, I would greatly appreciate a link back to this early post.

Lake Desire of New Game Plus will be hosting the next issue on August 3rd.

The issue’s theme–or writing prompt–is the present through origins. This could be a reflection on how your feminism and geekiness came to intersect, a post that traces the the evolution of women in a particular genre, a revisitation of the old school canons, a look at fresh and new things that are starting a revolution of their own, a memoir of finding that first great book or game or comic that really clicked for you, or whatever you can imagine.

Submission deadlines are August 1, 2006 (although I’ll still consider late submissions if I have time). Please E-mail them to lakedesire@gmail.com or use the web submission form.

Crossposted on Earth 2 and Zamaron.

I have a feature going up today on Blog@Newsarama but besides that its the usual weekly bout of laziness.

So instead, head over to 2 Guys Buying Comics for their latest Fly on the Wall.
Posted by Ragnell at 7:45 AM 3 comments:

I think CharlieAnders over at Other Blog has figured out the secret to Wonder Woman...

The problem with Wonder Woman is this whole idea that she came to our world to teach us about peace and niceness and caring.

She didn’t. She came here to fight Nazis. That’s all. 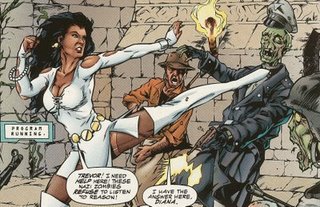 Which is that it makes no sense that the Amazons, after hundreds (thousands?) of years of isolation, suddenly decide to send one of their own off into the outside world as an ambassador. Why now? What makes them think the rest of the world is suddenly worth engaging with?

That’s where the Nazis come in. Because the Amazons see the rise of fascism, and the development of more and more horrendous means of mass slaughter, and it freaks them out a bit. So they have to send someone to help defeat the forces of evil, or even their secluded island won’t be safe any more.

(Yeah, I added the panel, that's not part of the original post. But it's an awesome panel. That's the first time I ever saw the "White Suit.")
Posted by Ragnell at 7:35 AM 11 comments:

I posted Today's Feminist post on Zamaron. It's about giving Donna Troy some respect for once.

Oh, have I told you about Zamaron yet? Basically it's a weblog for Feminist Appreciation of Green Lantern. Yes, another blog, but I have friends joining me over there. Plus this gives me a place to dump all of the Green Lantern news I find.

Soyoerika even made us link images, but I can't decide which one I want to use yet. There's seven, these 3 are my favorites:

In Kirby City not every superhero is a legend, in a city so overpopulated with costume adventurers its hard for the little guy to catch a break. From the superheros to the supervillains, Heroes Rebored follows the lives of different characters as they struggle with their daily lives.

So says the first page of Heroes Rebored, a slice-of-superhero life book that focuses on fraternal friendship in superheroic society. The story is mostly told in dialogue, action sequences are saved for when its meaningful.

In Issue 1, our Featured Hero is Dynamic Dan, Nicest Man on the Planet.

I'm serious. He spends his time fixing church rooftops, installing other people's stereo systems, picking up mail for old ladies, and yes, seriously, rescuing cats from trees. He's also, despite being possibly biggest boon to humanity in existence, a down-to-earth, relatable, human character. Dan's the hook. He's the guy you empathize with, the one you follow around.

It works because Dan exists. You've met him. You may very well be him. This is the guy at work who does all the little favors for the rest of the office, without ever asking for much in return. He's the guy in the community who spends all of his spare time volunteering.

Instead of spending endless hours fighting villains and gaining glory from it, Dan does actual good. So, naturally, he gets looked down on by the rest of the community as a small-timer. He can tell. We follow Dan as he interacts with his colleagues, and picks up on the little clues they drop. The little things they say and do that tell him their assessment of his value.

It's an unfair assessment, but if I get too much deeper into this I may end up spoiling the story. I hate to give it such a short review, but I'd much rather you read this book yourselves than rely on me for the highlights. I enjoyed it, it's a relaxing (and, yes, heartwarming) afternoon read.

I saw a short post on my news aggregator with a beautiful title.

Sadly, the actual post was not exactly what I was looking forward to.
Posted by Ragnell at 5:50 AM 7 comments:

Look at this page.

Did you see it? The old classic answer of "There aren't many female characters because superhero books are aimed at men."

This is a Bad Argument

It's a bad argument because it makes foolish assumptions about people.
"We're assuming that only men will buy, so we'll market it for men."
"Hey, a few women like it, and women are huge consumers. Maybe if we market it towards women they'll buy it."
"They have never bought it before, any women who do are weird extremists, most women have no interest in it. This is a man's product. Any strategy marketing to women will fail."

It's a Useful Argument, however, because it can go on for long periods of time while ignoring things like logic and common sense until the person arguing with you becomes too exhausted to continue.

You just have to remember to never change your stance. Consistancy, despite all rebuttals, is the effectiveness of this strategy. You can change up the wording, but never the actual idea. You'll wear them down eventually.
Posted by Ragnell at 10:19 PM 42 comments:

Adam Hughes is both writer and artist. 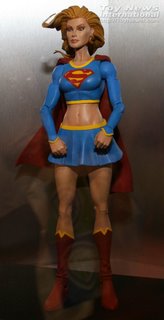 Wow, the collective, simultaneous laughter of all of Comics Fandom was a strong enough hint. Looks like an improvement.

You could fit organs there!

Asked about the scheduling of Wonder Woman, Terry Dodson said that he and Allan Heinberg are producing the book as quickly as they can, and that Heinberg is putting everything into the story to make it the best Wonder Woman story possible.

For nearly twenty days the same question has been up on Allan Heinburg's board at the Bendisboards, unanswered. I'm afraid we'll get no clarification on this one (but I suspect the writer -- the last time a Dodsons book was delayed, it was the writer then).

Dan Didio is a tease. Fortunately, he knows there's a market for this one.

DiDio asked everyone on the panel to reveal one secret thing from all of their books.
Dodson: Neither Donna Troy or Diana Prince is Wonder Woman in issue #3.

Sweet Demeter, that has possibilities! Is it a return of Hippolyta? Cassie stepping up? Artemis back from limbo? Confirmation of the theory that the "Diana Prince" introduced in Wonder Woman #1 isn't really Diana of Themiscyra? A villainess in disguise? Nemesis really freaking impressing the rest of us?

From the audience: "Is Wonder Woman a virgin?"

"Terry? Brad? You know what? Next question…" DiDio said.

Dear Mr Didio, Thank you for not answering this unbelievably stupid question. It's encouraging that DC is no longer obsessed with virginity as a mandate so that Diana can remain its premier superheroine, especially in light of the last JSA arc. For this, you deserve a thumbs up. Love, Me.

Dear Asshole Who Asked That Question -- Shut the fuck up. No Love, Me.

The Green Lantern pertinent stuff is up at Zamaron.
Posted by Ragnell at 1:47 AM 9 comments: