The Retro-Active stuff is set in the era he wrote during, so I believe we can safely say that we'll be seeing this Silver Swan. 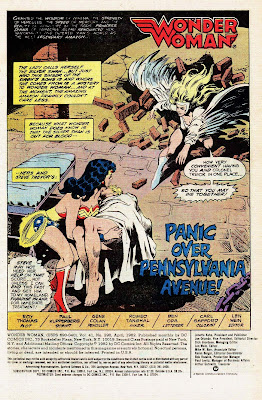 In case you haven't been paying attention or just found this blog today, my last two posts have been gushing over Roy Thomas-written Wonder Woman. You'll find all my recent Roy Thomas gushing here, here, and here.
Posted by Ragnell at 2:25 PM 1 comment: 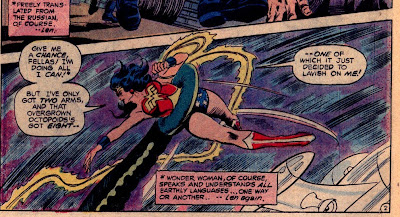 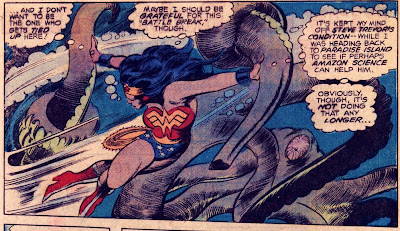 It's actually a really neat fight where we get to see her helping Russian sailors, speaking Russian, and dispensing a little environmentalism. She gives us a little exposition in her thought balloons while she disentangles the monster from the ship, protects the Russian sailors, and follows it down into the ocean to discourage it from coming back to the surface.

Then she continues on her way to visit home and talk to her mother. Her goal is to get permission to bring Steve back for a purple ray treatment. She's so focused on this goal that she doesn't quite realize that Hippolyta is extra-concerned about the chance Steve might die. That's because this Steve is from an alternate universe, and Diana's memory of the previous Steve and his record two deaths in a row has been erased. Hippolyta's fears include Diana suffering another bout of grief from losing a Steve, Diana finding out her mind was wiped AGAIN, and probably having to deal with a third Steve Trevor because the Fates seem pretty big on the Diana/Steve ship.

Then she pops by the apartment to pick up her uniform and her roommates, and heads to the hospital, finds out that Steve's not there and leaves. Oh, then we find out that her second roommate is actually the Silver Swan. All in all, the exposition in this book about last issue's story takes nine pages, but it's peppered around a pretty cool fight scene and some new information. We don't get to Dr. Psycho, in the story named His Name is PSYCHO! until ten pages in, which even I'll admit is a bit odd to me. This is definitely the second issue of a three-issue arc.

Eventually we get to the moment we've been waiting for since the last panel of last issue, a naked and unconscious Steve Trevor: 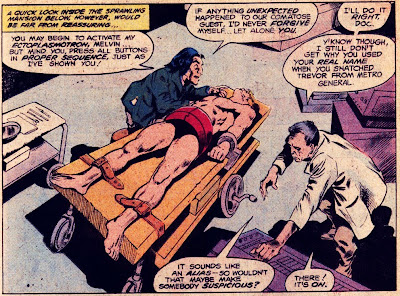 Oh, and the villain.

All joking aside, we should all recognize Dr. Psycho even without the creepy facial hair. We've seen him quite recently, after all. He's been one of those villains fortunate enough to survive fairly intact to the current era. His personality and motivation have been fairly consistent. His schtick where he takes over people's minds is still around, as is his deep obsession with destroying Wonder Woman because she represents all he hates about womankind. There is a big difference, though. Right now, he's a straightforward telepathic villain. Pre-Crisis he had a slightly more interesting set of powers.

Pre-Crisis Dr. Psycho controlled minds with hypnosis, and had a spiritual twist. If he could link minds with a specific person that he referred to as a "medium", he could reach into the psychic plane and pull out ectoplasm. Then he could use that ectoplasm to make himself a physical body that he could wear like a creepy psychic suit and pretend to be a tall, dark and handsome man. The ectoplasm seems to be the traditional ectoplasm of the spirit world, and not some psionic substance. We're never clear on whether he's a mixture of two types of psychic powers, or if his mesmerizing power lets him use the medium to activate their own latent powers.

His first medium was his late wife Marva, hypnotized to marry him and stay with him. In the Golden Age Wonder Woman rescued her, in the Bronze Age he seems to have murdered her. This was unwise, because although Marva's talent was passive it was actually very rare. He spent years searching, and as of this story has only encountered one other person he can use as a medium.

I'll give you three... On second thought, there's really no point in guessing. The only other person in the world with Marva's latent power is Steve Trevor. 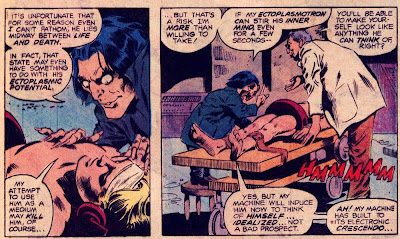 I'd like to stop a moment and thank Roy Thomas just for putting this idea out there. He does imply that it might just be a one-time thing because this Steve is from an alternate universe and is suffering from a "Being From An Alternate Universe"-related illness, but that doesn't change that the idea is out there. Dr. Psycho is by far Diana's creepiest villain. I can think of few better ways to annoy the living crap out of her than making it so her creepiest villain is specifically fixated on her love interest and now that option is out there.

That said, I am perfectly fine if he's a medium. It's receptive, passive, brimming with story potential, and suitable for a character who crosses mystical boundaries and gets knocked out/killed a lot.

Sorry, I've jumped ahead of myself. See, when Dr. Psycho switches on his Evil Machine to suck ectoplasm out of the spirit world through Steve's mind, Wonder Woman bursts through the doorway. Since Dr. Psycho is already building an ectosuit for himself based on Steve's appearance, he uses the distraction to add Wonder Woman's powers to it. The result? 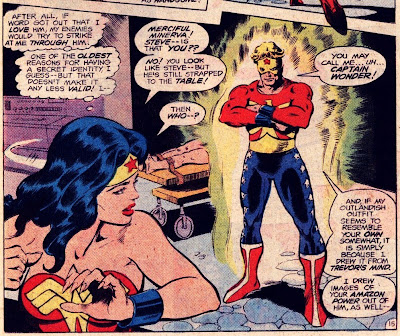 This villain is often sloppily described as a combination of Steve Trevor and Wonder Woman. That leaves out two important factors. One, this villain is Dr. Psycho. Not Dr. Psycho-controlled or a Dr. Psycho illusion. Captain Wonder is like a super-suit that Dr. Psycho wears to battle. Two, this is not a Steve and Diana hybrid. This is Steve's appearance added to the powers that Steve thinks Wonder Woman has. That's a big difference, as Diana soon finds out in the battle.

In later scenes, we learn that he can also use the jet and the lasso because Steve has seen Wonder Woman use the jet and the lasso. Also, since Steve doesn't know any of Diana's weaknesses, Captain Wonder doesn't have any of them. Not only that, but even after Diana destroys the Ectoplasmotron Dr. Psycho still seems able to make the connection between himself, Steve and the spirit world.

He does have one hell of a weakness in that Steve has to be under Dr. Psycho's control in order to maintain that connection to the spirit world. Otherwise, the ectoplasm breaks down and Captain Wonder turns back to Dr. Psycho. Steve regaining consciousness manages to do it, which happens due to luck and things like Diana destroying the Ectoplasmotron. As Steve has the Mysterious Multiverse-Based Illness at the moment, these moments of consciousness don't last.

Still, this being Pre-Crisis Wonder Woman she always manages to win and Capt. Wonder/Dr. Psycho is down by the act break. 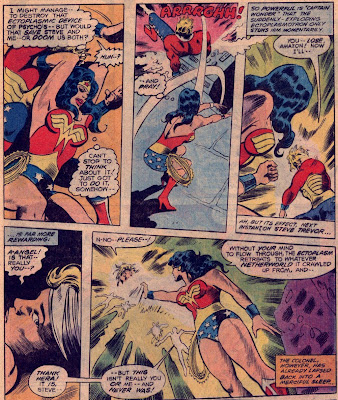 Captain Wonder's another good villain idea introduced by Roy Thomas that's just sat on the shelf since Crisis. They use Dr. Psycho, but because he's lost the spiritual aspect of his powers and Steve's lost prominence we're not likely to see the Captain Wonder persona anytime soon. Dr. Psycho's a really strong villain, but he can't get into a fight with Diana so he needs another villain or a strong enough hero to. Captain Wonder gave him the ability to fight her on a psychical level if he could work out the right conditions.

And honestly, I think I prefer the pre-Crisis Dr. Psycho. He's super-creepy back then too, but the spirit world aspect of his powers make him distinctive from other telepathic bad guys. This ectoplasm thing was a unique idea, and one that always brought a person for Diana to save into the equation when she squared off against Dr. Psycho. Really, if they thought of it we could have him discover this ability through a medium anytime in the future, but so few writers seem interested in reviving pre-Crisis elements that I doubt we'll see anything more than the usual telepathy.

That's a shame not only because writers seem to always be complaining that Wonder Woman has a bad Rogue's Gallery (She does not. The writers just only use the same four villains over and over again, and they don't use them to their original potential), but also because Roy Thomas uses Captain Wonder and Silver Swan together so effectively next issue.
Posted by Ragnell at 4:45 PM 1 comment: