Well, I was originally going to post about Kyle Rayner's butt, but I found myself distracted some commentary at Seven Hells. Essentially, the arguments there led me to a train of thought I can't seem to derail. They got me thinking of Persephone.

To the public at large, Persephone is commonly relegated to the role of "Victim" in Greek Mythology and ignored. It's true, she was only kidnapped to give Angst to her mother, Demeter. Hell, she was customed designed to give Angst to others. She was dragged through Hell and did very little during the story. She was deceitful and indecisive at worse, and helpless at best.

But after that story, she became one of the most terrifying and powerful figures of Greek Mythology. The day Persephone was finally condemned to the Underworld on a permanent basis was the day she fully took power and claimed the throne of the Underworld. She was always seated beside her husband when heroes came to visit (as Dr Bolen points out, no one ever found a "Gone Home to Mother" sign instead of a sitting Queen). She was often on their side, and swayed the rule in their favor. She was one of very few wives who was able to keep a lover aside from her husband without any backlash. She was the only one who ever forbade her husband to have an affair, and enforced it, not just once, but twice. She was the boss, if not always the mother, of the Furies.

Persephone was the sympathetic guide to the Underworld once you were there, she knew all of its secrets. She knew its secrets, she'd passed through the same death you had, and she was your last, best chance for mercy and sympathy, and if you were ridiculously lucky -- resurrection. No one got out of the Underworld without Persephone's approval.

Persephone was in such a situation of complete powerlessness that drawing any personal power out of it was akin to squeezing blood from a rock. But she managed it. She went from Hapless Maiden to Queen of the Underworld, She Who Blocks Out the Light. She made the unbelievable best of a bad situation, and she still gets zero respect for it.

I've long hated Persephone and Hades' handling in Wonder Woman, especially in Rucka's run since the other Olympians have been so well handled. After the events of "The Bronze Doors" Persephone would at the very least be in front of Queen Pallas with a protest sign right now. Sure, the early Persephone might have been grateful for the reunion with her mother, but after centuries of reigning as Queen and more equal to her husband than any other goddess, do you think she's happy with him dead and her ousted in favor of Ares and his slut? Ha!

But that's okay, I've found Persephone elsewhere in DC. Everyone is so quick to parallel Oracle with Athena, because of the surface similarities (extensive knowledge, helper of heroes, she's a librarian for Hera's sake!) but when you look more closely, Oracle is the DCU's Persephone. She was a bright, redheaded summer goddess. Optimistic and helpful, she was the only one of the Bat-clan to not have some horrific tragedy driving her to fight evil. Until the Joker saw her, and in order to hurt her parent, crippled her, humiliated her, and left her to die. Barbara found herself cut off from that world of adventure she'd loved so much and trapped in her apartment at a computer.

So she made like Persephone, and turned that position into one of power. It didn't happen until after the Killing Joke writer had long since moved one, and she'd passed hands to another creative team, yes, but it still happened. She became one of the most powerful heroines in the DC Universe, from a chair. She was the guide and helper to anyone lost, not only in the underworld of Gotham, but the entire superhero community. She outshined her own Hades (Batman) in detective skills. For a long time, he didn't make a move without calling her. She became the boss of the Furies, which was started by teaming with another Persephone who regained her power -- Black Canary. 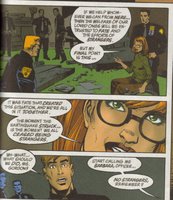 And now, she may be finally coming back to the light! And some are thrilled, while others are disappointed. They like Oracle the way she is. The way I see it, she's still Persephone. Regaining the use of her legs, and taking up an active superhero career is just assuming more personal power. She'll have her ups and downs, be back in the Underworld again, but that's okay. She knows her way around now, and she'll always have her computer skills, will always have her detective skills, will always be one of the most intelligent women around, and will always be able to tell others "I've been there, here's what to do."

And she's not the only one. Everyone's at DC is in the Underworld right now. Power Girl is trapped in her own wavering self-doubt and need to belong (Please note, however, that this is all Her Angst, and no one else's. Kal-L is actually around to cause more Angst on Power Girl's part). Jade's been there since she betrayed her lover's trust. Donna Troy is just coming off of many months of mind-control and about to get many people who trust her killed. Wonder Woman herself is cut off from her sisters, fighting off a gigantic robot monster with unlimited resources and reinforcements on her own, and reviled by the entire public.

The thing isn't the situation itself. The strength of the character is in how much power can be drawn out of the situation, and who they come out as. Power Girl's a born Artemis-type. Athletic and Feminist. She'll come out of the Underworld stronger, more centered, perhaps a bit less tempermental now that she'll have less insecurity. and go back to what she does best. Diana is Athena, and will reclaim her wise warrior role, she'll continue to do what needs to be done no matter what the rest of the world thinks of her. I wouldn't be surprised to see Jade get trapped in the Underworld. Barbara will become more physically active, but she and Dinah will still be the older, wiser Persephone types, helping those lost in the Underworld.

And it's not just the women here. Superman is coming off of mind-control. Earth-2 Superman is cut-off from his home reality. Batman is caught up in his own arrogance. I don't want to talk about Nightwing. Hal is coming off of years caught The entire DC Universe has made a side-tour to the Underworld.

But that's one of the pluses of DC. Everyone plays Persephone at one point. Tragedy and overcoming it is what makes drama. And anyone who is not the lead of a book is primed to suffer for another's Angst. I suppose you could argue that, due to a number of factors, most males get off easy -- but who does that make the stronger gender?
Posted by Ragnell at 7:00 PM