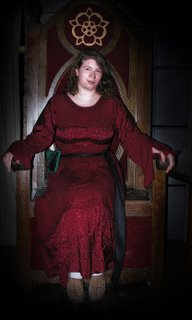 I have an appointment for the Med-faire later this morning (and not even my comically sprained ankle will stop me. I'll get one of those wooden staffs and hobbled around), so this week's batch will be short and sweet. (I'll join in on the She-Hulk conversation when I get back, but it seems to be going wonderfully without me and I've been outright challenged by a couple of the commenters!)

I figured those of you on livejournal who like comics might appreciate a female-based community There's a number of Fangirl communities there, but Comic Fangirls has been especially active lately.

I've been monitoring 100LittleDolls (found through Kalinara's blogroll) for a few weeks now. The content is splashed across gaming, comics, and political topics, and is always thoughtful and feminist. These interest usually combine, as in this post about a video game, the comments on a Feminist website about it, and ethnocentricity.

Sherin at BigMonkeyComics is musing about Poison Ivy in the Fan Fatale forum (aimed at women) this week. In addition to asking which very of Ivy is the real character, she asks about her kiss-of-death-power. "Is it just another case of male desires driving female characters’ powers or is it a girl-power move in which Ivy uses male libido and the law of blood from the brain… (think about it) in the cleverest of turnabouts?"

Ahh, Comic Books. I love them a lot, but I sometimes find more to complain about in my purchases than praise. Yet I keep buying them! Carla at Snap Judgements gives this disorder a name, calling the tendancy to buy horrible books and then complain endlessly about them online Take Back Ike" Syndrome. (And yes, I too will be watching X-3 despite expecting to hate it. Because it's got Multiple Man)

And finally, cshiana at The Matchstick, the girl who grew up in a comic book store. She dislikes Green Lantern, but I forgive her because I found a picture of Ice hugging a baby seal on her blog. And she is not alone in loving Bigby Wolf.

Once again, enjoy the new blogs, feel free to e-mail me any suggestions, and these ladies are going up on the blogroll as soon as I get home on Monday. Have a good weekend everyone!
Posted by Ragnell at 11:19 AM