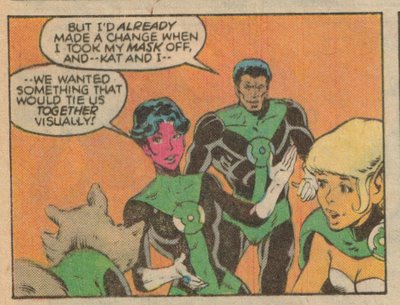 (Yeah, I know she didn't make my 50 Greatest List, she still deserved better)


The RantHold on, girls and boys, this is my depression downturn before the new comics come in. Green Lantern #11 is shipping. I was pissed off last issue. I was hoping this issue would turn that around. I figured I'll get to see what John is up to.

John's a great character, he deserves more play than he gets, and an undercover storyline sounds intriguing. But I have to admit the real reason I've been waiting.

I had a sneaking suspicion that he might end up in a storyline to resurrect his dead wife.

Katma was the first female Green Lantern (Issue 30, second series, 1964). She was brought in as a trainer, and later married to John Stewart in the 80s. She was killed unceremoniously in a ten-page story (Action Comics Weekly #601 -- in which she appeared in less than 5 panels, had three lines, and came off as, well, there is no other word for it, came off as downright bitchy). This was done to create angst and cause tension between the two male characters -- Hal and John. Later on, she was resurrected at the end of the Green Lantern: Mosaic. This, naturally, was retconned away for Emerald Twilight in the mid-90s.

During the resurge right before GL: Rebirth we saw minor alien character Kilowog (created shortly after Crisis in 1986) resurrected. We saw John Stewart (1972) returned to Lantern status. Then we had Rebirth, and saw Hal Jordan returned to life, and Guy Gardner (1968) returned to the franchise. After that, they revealed that Lanterns like Salakk (1982) and Stel were not dead. And then everyone who had "died" during Emerald Twilight (Most of whom were created in the early 1990s) was revealed to have survived.

I've seen a lot of activism about women in comics popping up. On one hand, I think that's wonderful. On the other hand, it pisses me off.

Because the Fridge list was named and began in honor Alex Dewitt, a Green Lantern girlfriend created and killed in 1994, who's short life lasted 4 issues. Her death was an origin death, like Martha Wayne's. She was a civilian. Her death wasn't even sexualized. I never thought it should have counted.

Recently, Jade (1984) was killed to power up another character. It was so pathetic even I couldn't enjoy it. It's caused a lot of fan outrage and hatred towards Kyle Rayner (1994 -- the character powered up) and Ron Marz (the writer who created Kyle, but not the writer who killed Jade). There's a number of people pissed off and demanding Jade return, despite the unbelievable likelihood that she will anyway soon.

And not much is being said about Katma.

She was killed to give angst not only to the main character, but to a character eight years her senior. Everybody and his brother is being returned to life in this franchise, and she hasn't been. She even had a resurrection that was retconned away.

I'm writing this after participating in an argument with a total idiot on a message board who thinks that it's easier to pair John Stewart with the new female Korugarian (who has a totally different personality, but hey, "they're both hot sred-skinned chicks") than to resurrect the Very First Female Green Lantern Who Predates John by Eight Years and Soranik by Forty-One Years, not just because he pissed me off, but because I realized something.

She is not coming back.

They are Never Resurrecting this Character, or Even Just Undoing the Retcon that De-Resurrected Her.

Superboy Punching a Wall Did Not Bring Katma Back.

Tomorrow's issue will not feature a hint as to her return.

Neither will the first arc of GLC.

And why, when they have resurrected just about everyone else and undone most of Emerald Twilight's (rememebr, she had a resurrection before ET!) damage away, will they not bring Katma back?

Well, the simplest explanation is the most likely.

Because when she comes back, John Stewart will be a married man.

And his character takes precedence.

Which is Misogynistic Bullshit.

And so, fair warning, I'm going to be mighty pissed off for a little while. I want to see Happy Faces to offset this. And if I hear anyone (on this blog, at least) complain about anything except for this, I'm going to be pissed at you.

We now return you to your regularly scheduled Ambush Bug... 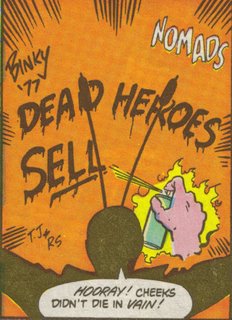 Already in Progress.
Posted by Ragnell at 4:21 AM