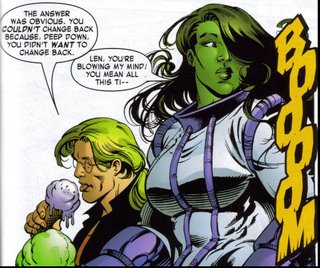 I set out to comment on another post, but not only was it too long to put in the comments, but it essentially turned into a mild analysis of The Incredible Hulk and an explanation of why I love She-Hulk.

There was a complaint about She-Hulk, and the difficulty to find an image of her expressing rage. This naturally, led to commentary on the objectification of women in all media, as evidenced by the difference between She-Hulk and Hulk. I joined in, but only to link the lady searching for She-Hulk Hulking Out pictures to the most recent scans of She-Hulk enraged. They hadn't seemed cheesecakey to me at all. But Tekanji disagreed.

But, Ragnell, that's actually the comment I had in mind when I wrote that she has to be sexualized. The hand panel, I'd argue, is the only "ugly" one of her. In the second link, you have the balloon breasts popping out, and then the fight scenes has a lot of ass shots. She's very muscular, sure, but she's still hot.

I was surprised they actually let her look like an extremely muscular woman (they usually just make her taller, a little more muscular and paint her green). She was bulked out and enraged, as opposed to a thin cute little thing with extra strength.

I looked over the pictures again, and nope, didn't see the problem. Oh, well, disagreement here.

Do you notice how the Hulk bulks up past what a realistic human could be, but She-Hulk looks like a bodybuilder (possibly with breast implants)?

That didn't really register with me until you posted the Hulk face above the three sexualized She-Hulks. It's obvious that they didn't go for ultra-exaggerated because it would make her ugly.

And then it hit me, neither of these women follow The Incredible Hulk or The Avengers, so naturally, they missed out on the She-Hulk origin. She-Hulk's not a full Hulk-monster. She's got powers through a blood transfusion, not direct gamma radiation, so she doesn't reach the full destruction level. This allows her more self-control when she fully powers up, but she's not about to level Brooklyn in a rage. They didn't make her an all-out monster because she's still under her own self-control there (even though she's powered by pure rage, she could stop herself from killing him). Whereas, Bruce is always raging out of control as the Hulk.

It's basic Hulkology here. Appearance, when Hulked out, is indicative of character. The point behind the Hulk is that the buried self is revealed when the Hulking occurs.

Bruce Banner? Mild-mannered scientist and good citizen. He's naturally a seething mass of rage who has been taught from an early age to force down and bottle that rage. His Hulking is a sign of his unhealthy emotional state. When he hulks out, he loses control (depending upon current story status, granted, but this is still his concept). He's like a child with immense power. He destroys everything within reach. He's a protagonist but certainly not a reliable hero. He's not really a person when he powers up, he's completely unresponsible for his actions and wakes up from one of these episodes like a man awakening from a nightmare. It's terrifying, and he wants to avoid it. His fear mingles with unfocused rage. In this way, his powers become self-perpetuating. He will never be cured because merely being cursed causes him so much fear and anger that it doubles the curse.

Dr. Leonard Samson is a different story. He got hit with the gamma rays, but never turned into a monster. Instead, a latent mutant power was activated. He got strength and green hair, but remained, essentially, a human-seeming man and retained his intellect and personality. Dr. Samson never changes. He is his true self, and nothing has been buried to an unhealthy depth. This may have something to do with his occupation as a mental health professional.

Jennifer Walters is another story. She's (well, she's supposed to be) a fairly average looking woman. All her life, society has told her two things. 1) She is not a knockout by their standards, and therefore may as well be invisible. 2) She is a woman, and a small one at that, so she needs to be extra careful of all the big strong sadistic men who prey on innocent little women. Then she gets a blood transfusion from her unfortunate cousin, and it's the biggest break of her life. Yes, she's savage at the start, but once she calms down she comes to a realizations. She's bulky, she's colorful, she's tall and she's beautiful. No one can ignore her now, and no one can intimidate her. She's one of the strongest people on the planet. Being She-Hulk is a blessing to her, and she revels in not only the newfound patriarchal approval of her appearance, but also the strength and power that saves her from the life of caution most women are compelled to lead. So, instead of losing her mind in a cursed state, she retains her intellect and personality, and becomes more outspoken. While there may be feminist discussions as to the actual amount of power Jennifer gets from her appearance, there's no doubt that as a person, she feels empowered by the beauty and the strength equally.

If you read She-Hulk, you'll notice that there's implied problems with her current boyfriend, John Jameson. The reason? He doesn't like walking down the street next to She-Hulk. Jennifer is regularly confused by this. She can't imagine why anyone wouldn't want to be next to the She-Hulk, and thinks it's just a Jameson family problem with superheroes. Johnm plays it off as preferring her "true form" but he's lying. He likes the mousy aspect of the surface Jennifer better. The down-to-earth aspect. The aspect he can relate to. But the aspect she prefers, the larger than life She-Hulk, makes him uneasy. This makes Jennifer uneasy, and she's brought it up a number of times. The problem as I see it is really obvious. In the Hulk, your true self is most readily apparent when you are powered up. John's uneasy with Jennifer's true self.

This relationship is obviously doomed.

But I digress, my point is, Jennifer has a more human appearance simply because when powered up, she's more rational. Sadly, she's not as powerful. Granted, this is more in the lines of the diminuitive female version of male hero sexism, but it's the reason they make her look like a human bodybuilder when she hulks out rather than a Frankenstein-esque monster. Because she's not an inhuman monster like the Hulk, she's a human hero. It's not (always) to make sure she's "pretty."

This has some nasty gender-normative issues in itself. The male is wild and uncontrollable, not responsible for his actions, while the female is the rational being who happens to be less powerful as a result. And she has to be a sexual, desirable being while he is to be loved for what he is.

There's definite objectification and a double standard in effect. The obvious solution there would be to change She-Hulk to more resemble her cousin. Up her power, and change her appearance to more monstrous.

Except for one thing -- we'd lose Jennifer. In the Hulk, Appearance represents inner self. Jennifer is still rational and human while hulked out, and as she enjoys it she doesn't acquire any extra rage when she does. If anything, she comes away from her more enraged, monstrous periods relieved and feeling accomplished. Even when she hulks out beyond beauty standards, she retains some measure of self-control (unless, of course, she's been externally controlled like in Disassembled). If she were to suddenly become more like Bruce, the character would change drastically.

And Jennifer, as is, is a fascinating and wonderful character with loads of room for growth and exploration. She is ten times more interesting to me, gender-normed concept and all, than Bruce is.

We all know what Marvel thinks of her. There's a reason they hired the cover artist they did. They're sure she's nothing more than cheesecake. But I'd put money down that if they were to switch cover artists from Greg Horn to James Jean tomorrow, she's not only still sell evenly, but her sales would go up because people who were turned off by the excess cheesecake covers (as I was) would be willing to check out the series. And they'd keep picking it up because the writing is wonderful and the character is fascinating.
Posted by Ragnell at 7:29 AM