True to form, I read Green Lantern #11 first today, fully expecting disappointment. I expressed my earlier ennui about Katma, I was pissed off about a new backstory element introduced in Green Lantern #10, I wasn't expecting John to have more than a page or two, and I'd realized that Johns was lying when he promised Kyle (who I just haven't been seeing enough of lately) would appear in issue 11. It seemed I had nothing to look forward too.

But I read it, and I enjoyed it (even when the plot element I disliked intensely came up). Hal was as jerkily appealing as ever -- if he didn't have such a beautiful face I'd hit him (fortunately, he was hit for me many times this issue without doing any damage), and had all those lovely soft facial expressions (confusion, disbelief, mischeviousness) I like to see on guys. Guy was brash, cheerful, and seemed subtly perceptive, while also having at least one charming soft facial expression. Kilowog and Salakk had lines, Soranik had a cameo (Nikkie was actually doing medical work! Another Doctor for Scott's list come Green Lantern Corps?), and the Corps again seemed like a very large police force.

And though I was once again pleased by the inclusion of many background female Green Lanterns, I came away with the feeling I wouldn't mind this creative team doing a book with an all-male cast.

But I can't imagine where that idea came from... 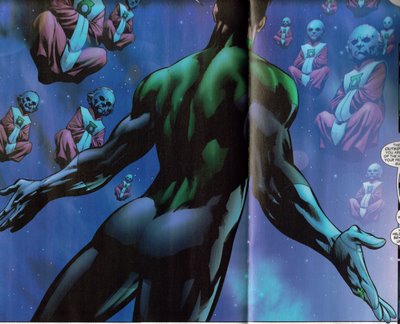