Boobies! (And the Lack Thereof)

"Helligan's a tragic loss. Why's everybody's so excited bout her? Like Whip and Jackie and Dan and Vigilante? Yeah, she was cool. But she's a vampire zombie now. "Sky High" Helligan gives us a human and common sense perspective as to the levels of view shown here. She zooms out and sees the whole picture. Cue us to do the same." -- Chad (July 5, 2005)

The above opinion was expressed in response to Shining Knight #3, where FBI Agent Helen "Sky-High" Helligan came out of nowhere to help us piece together the reasoning behind there being two Shining Knights in the DC Universe, shortly before being bit by the Bitch Queen from Beyond the Vampire Sun for all of her trouble.

If you're up to speed on your Seven Soldiers, Read On

As it's been over two weeks now, most of you following Grant Morrison's Seven Soldiers project know that Sky-High Helligan returned for a short swan-song in the Bulleteer #2, where once again she came to give us exposition and advice before croaking.

In case you haven't noticed, the Bulleteer is a hypersexualized character. Paquette was specifically chosen for his ability to draw cheesecake. Yet, Helligan, standing next to Alix, is far from sexualized. 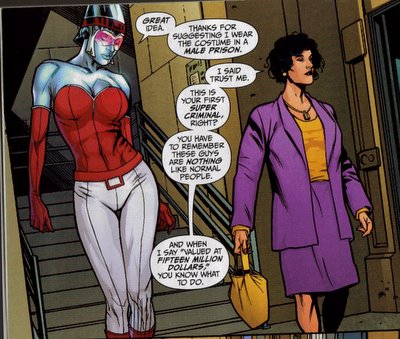 She's a lovely woman, yes, but standing next to Alix, it's harder to realize. In fact, Alix's outstanding appearance enhances Helligan's normalness, and actually enables the FBI agent's skills and personality to shine. Helligan is a fine foil for Alix, also, drawing attention to the taller woman's naivete, and casting everything about her, even the way she stands, in the light of that characteristic. Helligan stands and walks like a real woman. She is serious and practical, and constantly using her mind. Next to her, Alix's posing is revealed as more than just the artist's style, and less than Morrison's metatext. It becomes characterization. Alix is new to this world. She's self-conscious. She's like an adolescent girl, trying to find her identity. She knows what superheroes are supposed to look like and she tries to fit the part with her posing and her wardrobe. On her own, she looks the part. She is a comic-book female. But next to a wise, self-possessed, professional woman like Helligan, Alix's true childish nature is revealed. It's a put-on. Alix has no idea what a real superhero would be like. She only knows how to look the part. That's fortunate, though, because that's all she needs to do for Helligan. Had Sky-High lived longer, they would have made an ideal team. Now, Alix will have to grow into her own.

Surely, that's all there is to Sky-High, right?

No, that can't be right. Grant Morrison wrote this. There must be more metatext than just that.

One of the obvious themes of Bulleteer is what men value in women. That's how Alix got her powers. Her appearance was valued by her scientist husband. He wanted not only to preserve it, but to enhance it so he could live out his superhero fetish fantasies. To get the point across, Alix is hypsexualized in Bulleteer #1. It's not until the second issue, though, when you meet Helligan again that you realize that that's special to Alix. Most purely cheesecake artists pose all of their featured females provocatively. Paquette reserves these poses for Alix. And the more I think about it, the more I'm convinced there's metatext behind Sky-High's lack of hypersexuality.

I suspect it means that Helligan, or rather, what she represents, is not valued by men.

Her skills are not physical, they are mental. She is not a soft, feeling, social woman. She is not passive, nor is she passionate or fiery in her aggressiveness. She's a cool-headed, creative, analytical, intuitive and intelligent woman who gets excited and talkative about ideas. She's pure of heart without being an ingenue. She's worldly and knowledgeable, but not jaded. Indeed, all her knowledge, up until the unfortunate incident with the aforementioned Gloriana Tenebrae, just makes her more fascinated by her subject. 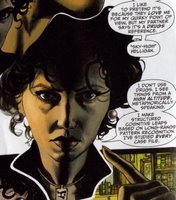 Helligan does her detective work by connecting her analytical deductions with creative leaps. She seems to be making things up on the fly, but is actually basing her conclusions on on an immense collection of knowledge, experience and clues. She's so good at putting together the "Big Picture" she's nicknamed Sky-High. The way she describes her cognitive abilities reminds me a lot of feminine intuition. A woman's gut instinct is based on a thousand unconscious clues. She reads people, she reads places. She factors in the wisdom passed down from the elder generation. She draws conclusions about the entire situation based on these subtle details. Traditional masculinity dismisses this ability, and the entire body of feminine wisdom that lies behind it, as silly or superstitious.

Alix, a young, physically fit, beautiful woman who worked with children, is soft-hearted and caring, but shy and gullible. She is womanly strength and beauty as defined by man. She's the heroic archetype of the Reluctant Good-girl hero. The Beautiful Young Girl (Bishoujo) archetype.

Helligan embodies the Wise-Woman archetype. Not Athena, but Metis the Forgotten Mother (which is fascinating given how much Gloriana resembles Medusa). It's not in her age but in her skills, her story role, and her group dynamics position. She is a creative thinker and an expert in metahuman affairs, she appears to dispense exposition, and she gives younger woman like her sister and Alix (and actually, Ystin to a point, since she was there to help), the benefit of her knowledge and experience. Hell, she even figures out where the Sheeda are from, and I'd lay money she's right. 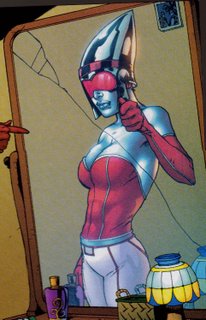 Alix's sexualization, next to Helligan's lack of sexualization, just screams that the Ingenue is valued over the Wise-Woman from a masculine point of view. This seems to matter quite a bit to Alix, who's entire identity is based on her late husband actions. She's a portrait of womanly strength as painted by an adolescent boy. (The condition of the Mirror in the panel at right tells us all we need to know about that viewpoint) She can't see her own value to the universe, she only knows what her late husband wanted and is stuck with the hand he dealt her. Sky-High Helligan, on the other hand, is self-identified, a portrait of womanly strength as created by the whole of the universe and knows her value as it applies to the tapestry of life itself.

In the events of the Bulleteer #2, Helligan is slowly dying. Alix needs to carry her at points. But Helligan is still in complete control of the situation to her last breath. Alix feels helpless and worthless, "not like a superhero at all", while Helligan dies seeing the Big Picture and knowing what she's done for it.

Alix has none of Helligan's observation skills. If she had, she would not have powers. She would have seen her husband for the pervert he was, and realized his subtle digs at her age and appearance were signs he didn't really love her at all. It's too late to fix that now, but its fairly obvious that in order to survive, Alix will need Helligan's undervalued wisdom in addition to the physical powers she recieved from her husband. Hopefully, by the end of Seven Soldiers, Alix will have enough wit to be more than muscle and window dressing.
Posted by Ragnell at 3:41 AM