Rant Subject: Sexual Harassment
What Set Me Off: The wording in this interview that states "If you accuse a well-known comics personality--what they referred to in my neck of the woods as an "old soldier"--of harassment, you are de facto blacklisted."

(I promise something lighter next post, but I must get this off my chest or I will probably bite off the head of the first male I see tomorrow. And it'll be some unsuspecting innocent, I'm sure.)

(Click Here to see my Sexual Harassment rant)Most of you have picked up that I work on an airfield, in a heavily male dominated career field (I am the only female, for example, on my shift in my shop. Some shifts and some shops are entirely male). I was trained to work on aircraft during my enlistment in the US Air Force. And everyone knows what they say about the military and sexual harassment.

It was the best work environment I'd ever worked in.

Hell, it was a better work environment than any of my older female relatives had ever experienced. During my first term of enlistment, three female relatives all experienced some form of sexual harassment. My one cousin was suing, because she had a job that invovled roughly 10% labwork and 90% customer service/paperwork, and had been fired when she got pregnant and couldn't do the 10% labwork. Do you know what happens when you get knocked up in the military and the Doctor says you can't do 95% of your job? You do everybody's else's 5%, take your maternity leave, and come back to your normal job. No penalties (unless you hate paperwork). No pay cut (except perhaps for hazard pay if you get it). No firing. 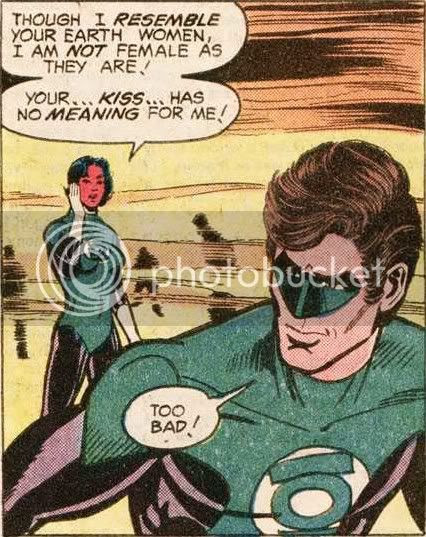 And you know how I found out about one of the others? When me, my mother and my (also, at the time, military) aunt were all laughing at the latest "Military Equal Opportunity" briefing at Fiesta, one of our companions was visibly upset. The experience she related was utterly foreign to us. She was in sales, had been come onto by a coworker (who had no seniority, but was friends with the boss), turned him down, and was being screwed for scheduling, and therefore commissions because he didn't want to work with her again. We just gaped and thought "This still happens? What the hell?" because that's how much better an environment my aunt and I were in.

Everyone's heard of at least one major sexual harassment scandal in the military (usually the Navy, which may have something to do with wearing nametags on their asses, but my friend Cindy was a radioman and she never had a problem so apparently that branch was cleaned out also) and it's because of all that housecleaning in the 80s and 90s that I worked in such a lovely environment during my enlistment, and it's because of housecleaning that I work in such a comfortable environment at my current job.

Nowadays, not even a four-star General could expect to get away with that kind of behavior. Hell, even a Commander-in-Chief's been called on it. If a military professional were even verbally heard in private to express the same attitude found in Frank Miller's ASBARTBW Script, which was publicly printed, he risks being called on it and severely corrected. And the more seniority the offender has, the more severe the corrective action.

So, what kills me is to see an industry where the senior men are still protected in this manner. It may only be 5% or so, but what has that 5% ever done to deserve this protection? They've written comic books, for Mars' sake. Comic Books. This is not Colonel Stutz or Sgt. Levitow (neither of whom have anything close to this dishonorable attached to their good names, but the point is a soldier with a comparable record wouldn't get the break well-known comic professionals are given just because no one remembers their crappier work) we're talking about here. These are not "old soldiers." These are writers and editors. Get some perspective.

The entertainment industry is so fucked up. 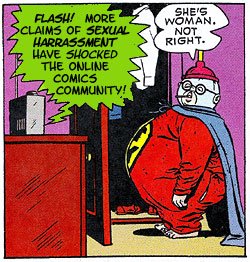 Even Herbie knows it's Unacceptable

Herbie panel courtesy of Chris Sims at the Invincible Super-Blog

Click Here to See Me Make Light of This Subject
Posted by Ragnell at 7:25 AM