It was definately worth the two extra days it took to get comics this week. I had a three-way tie between Jonah Hex #3, JSA #81, and Seven Soldiers: Frankenstein #2 for favorite comic. I have to say, though, that JSA has the edge because of a certain guest-star.

Expandable posts are great for Spoiler WarningsFirst I need to confess something.

I love the crotchety old men of the DCU. I love them telling Nazi war-stories. I love them showing up the younger set. I love them keeping the decent values of their generation and accepting the progress of the modern era. I love them fighting, I love them planning, I love them sitting around playing poker. I'd still read JSA if the entire comic was Jay, Alan and Ted bitching about the thermostat. Hell, throw in Hippolyta and I'll have to write begging for another issue like it.

But my favorite crotchety old man is the oldest and most crotchety of all. The retired (not reformed, mind you) supervillain. The one who never ages, and doesn't look old. The one who hadn't changed his values for 150 years, no matter what the rest of the world was doing. The one who regularly tells demons, figuring that each one is the Devil himself anyway, to go back to Hell. The one who would have no problem dating a girl young enough to be his great-great-great-great-great granddaughter. The one who knows a whole bunch of secrets he probably shouldn't, and records them in journals that would cause an insane scandal if any of them were stolen and made public. The one who probably doesn't remember most of the sixties, even though he was awake the entire decade.

Yes, I'm talking about the Shade.


It's been a while since we've seen the Shade. He put in a required appearance in the Princes of Darkness storyline (as everyone who had ever been connected to a member of the team showed up), but otherwise he's been keeping to himself. He never writes, he never calls. Even so, provided he's not written by You-Know-Who, he's always welcome in my pull list.

But I noticed two things this appearance, and I'm going to discuss the first with you today. 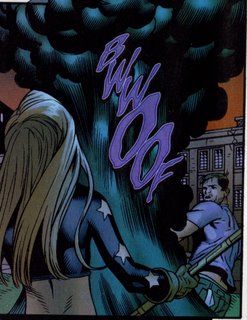 He has a new sound effect. BWWOOF! Shade's never made noise when he teleports before. Not that I've seen. But this is worthy sound-word.

I know, the most famous teleport sound is BAMF! But BAMF is a Marvel sound. And besides, BAMF! doesn't suit Shade's style of teleportation. BAMF is too impish. It implies a small burst of energy, as though the teleported item had been contained to atomic size, transported very quickly through subatomic space, and was suddenly pushed back to normal size. That is not how I've understand the Shade to teleport.

We know that the Shade slips through darkness into the Shadowlands. He opens portals in the middle of thin air to step through. And then he appears elsewhere.

In between those two places, I've always gotten the impression that he does not move himself, but rearranges the area to suit his path. He actually moves reality so that the area in the Shadowlands that corresponds to the area of the normal world that he wants to go to, is closer to him. Then he opens a portal from the World of Darkness to the World of Light, and ends up quite a ways away from his starting point. This wrecks havok on the Shadowlands, which explains why no Darkness-manipulator other than Culp (who would have teleproted in the same manner) has ever operated in the Shade's territory. Because the Shadowlands around Opal City look like they were painted by MC Escher.

Now, I have no basis for this assumption, other than it sounds cool and it suits his personality. The Shade does not go places, places go to him. And I like the idea of Obsidian having to follow the Shade someday and getting that "I'm trapped in an Escher Painting" kind of headache.

BWWOOF! is an excellent sound effect because it implies a great rush of energy. The Shade rearranging the Shadowlands would cause just such a rush of energy, especially in a hurry over a great distance, as shown here.