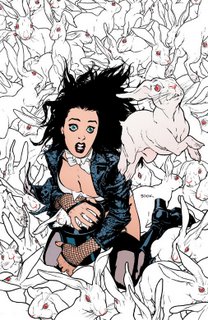 At the risk of stating the obvious, I think it's about becoming a mother.
Spoilers here, so read on at your own risk.Standard Seven Soldiers Spoiler Warning

No, I'm not talking the literal physical pregnancy thing here. I'm talking metaphysically. We've all seen the spiritual trinity of Maiden/Mother/Crone applied to female characters so much that it's become cliche. But here's the thing, it's an accurate depiction of the phases of a woman's life applied through mythology. It's deeply a part of our subcollective cultural view of women.

All three women of Seven Soldiers are making the transition from Maiden to Mother in some manner. Sir Ystin is making a physical transformation. She's growing from a child to fertile young woman (note the "I smell the blood of a womb" comment from Gloriana). Alix Harrower has actually regressed from a fully realized confident young woman (in the mother stage of life -- she's nuturing a marriage, her husband's dreams, and her own career -- which deals with autistic children) to a child playing dress-up. She's still midway through her series, but in order to survive you can tell she'll need to grow up by Seven Soldiers #1.

And then there's Zatanna.

When we meet Morrison's Zatanna, we can see that she's been trapped in Maidenhood for such a long time. She's trapped not only by DC's elastic timeline policy and our cultural obsession with youth in women, but also by her own nice in the DC Universe

DC's elastic timeline, as we all know, serves to keep up to 60 years worth of events trapped in a 10-15 year model. I call it elastic, because I think that at some point we'll find out in some future crossover that the Timeline in the DCU is actually stretching to fit all of stuff that's happening into just 15 years. Jon points out that everything that has happened since Zero Hour all fits into one year. That's a single comic book year stretched out to accommodate eleven years of publishing. (On the other hand, Kyle's quite a prodigy, isn't he? And he sure as hell can't have breached 25 yet) 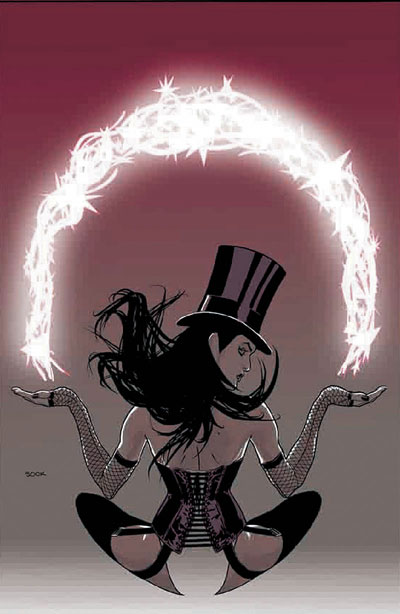 Zatanna's physically trapped because we want our female superheroes to remain young, beautiful and sexual. There's a severe lack of Elder females in the Golden-Age set. While Ted, Alan, and Jay are around and showing their advanced years, the late Hippolyta was immortal and time-traveling to retain her youthful looks; Black Canary I is dead; Phantom Lady I is aged and retired; and Liberty Belle only very rarely surfaces. Poor Z has a double-dose of this trap, however, in that her "day job" is in show business. She's the Magician and Beautiful Assistant at once.

But the above can all be dealt with. The major problem as I see it, is that Zatanna is a legacy character, though we often forget it. She succeeded her father, Zatara, as the top-hatted backwards talking magic-user of the superhero set. Her place in the legacy-driven DC Universe was secured by her father's long-standing death and her own lack of a sidekick to replace her. Unfortunately, this leaves poor Zatanna at a loss. There is no aging in her world. Her Elder Statesman is dead and vanished, and she has no teenaged counterpart to outline the passage of time. 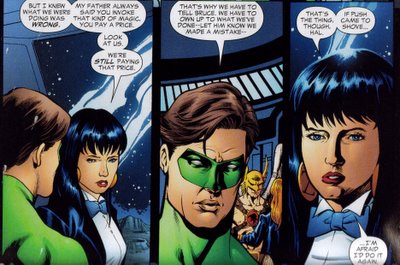 This is a big deal. Look at the Green Lantern franchise. Check out the the Showcase: Green Lantern stories of Hal Jordan. Compare them to the Hal we have now, and the one we had 15-20 years ago. Hal's matured quite a bit. Hal made a transition to a Fatherly archetype because he was given younger Lanterns like John and Guy to mentor. Early issues of Volume 3 illustrate this relationship between Guy and Hal beautifully. John and Guy were in turn able to mature because they had a hand in mentoring Kyle. Kyle, surrounded by a lack of other Lantern characters, was trapped in the rookie mold for more than a decade. Once Hal returned, and the Corps was restarted, however, Kyle was allowed to mature. Why? Because with a new Green Lantern Corps, he's surrounded by younger, newer recruits that enable him to become a mentor and grow past the Youngest Son archetype. 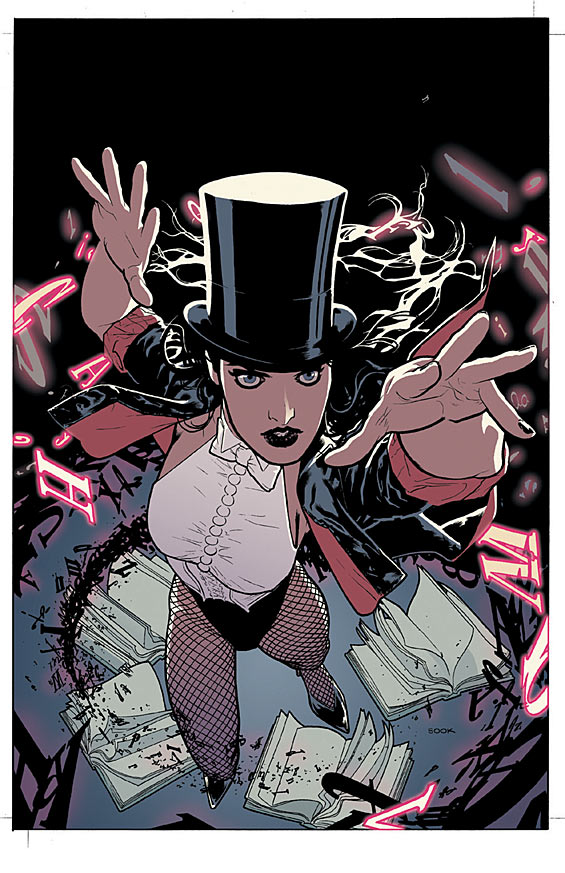 In Zatanna #1, we see these years of stunted growth pile up on her. She looks like a beautiful mess. The whole plot of the first two issues is because she's made a beautiful mess of her life. She craves maturity and stability, and having no family left, she does an ill-considered love spell and accidentally conjures up the villain of the first half. She then proceeds with a plan to gather her father's books, the last of his wisdom, and runs headlong into this monster she created instead. She's so devastated at this and her other past actions, and so drained of any hope for the future that she can't even get her powers to work.

She thinks she wants romance, but what she really wants is family. She particularly wants her father back. What she needs, though, is to fully grow into her father's shoes. But she can't do that, no matter how many times she saves the world, until she can fill the role of parent/mentor. She has all of this knowledge given to her by her father, and it's just there. She needs to pass it on. She needs to stop being a daughter and become a mother.

Look carefully at the art in issue one compared to two, three, and four. In the first issue, Zatanna is a lost little girl who never combs her hair. She's at the end of her rope, facing a nightmare she created, and utterly alone. Then Misty enters. Suddenly, Zatanna is responsible for another life. Not only that, here is a ready and willing receiver of all of that knowledge and wisdom her Father gave to her. She has her doubts about it, sure, but she ills the best role a person can. She accepts the challenge to teach and protect the next generation.

And Voila! Zatanna's confidence returns. You can see it in Sook's art on the covers alone. Again, she still has doubts, but the despair is gone. She may not have her powers back, but she's responsible for this. 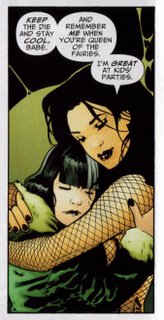 And now, she's responsible for Misty. She has to handle it. And she's certainly capable. She's combat trained by the JLA, for heaven's sakes. She shouldn't be sitting in a support group when the end of the world is nigh! She should be stopping it!

Zatanna is finally allowed to grow to the next phase of life. She's passed her wisdom on. She has a protege` out there.

I'm afraid, however, that won't be the end.

You see, she's filling her predecessor's shoes in very direct way. Most of the other Soldiers are legacy characters, but only tangentially. Zatanna has directly taken over for her father.

And he died fighting the forces of evil.