After seeing the Newsarama preview scans for Robin #151 (via the Fortress of Fortitude), I've come to the conclusion that the Spoiler's death wasn't so meaningless as Mary and Co. believed.

In fact, I think it had quite a large (potentially spoilery) impact on the Batfamily.

Yes, quite a large impact... 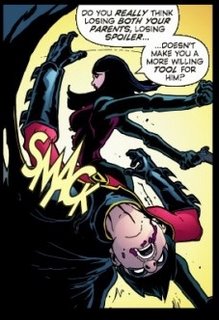 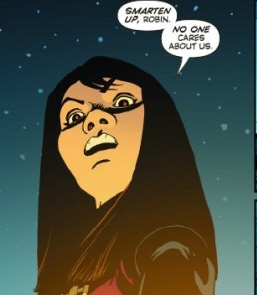 Yeah, not the impact you were looking for, but still...

I have to say, though, she's reminding me of the 90s Huntress, who, despite being on the outs with Batman and everyone else in Gotham remained a hero. And now she's been falling in line, and the position of "Batfamily Black Sheep" is open, and Cassandra was ready to give up "Adoring Daughter" anyway.

It could work out very well, actually. I'll be picking this up now (I'd previously decided against it after issue 148) to see the whole story. At the very least, there looks like seriously interesting metatext and symbolism going on.

But for now, I just have one more thing to say about this: 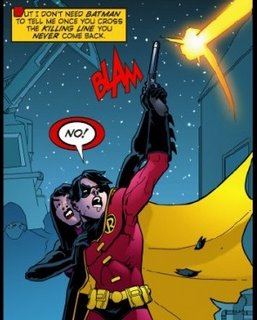