I was worried when they announced the Wonder Woman relaunch artist. I've seen Dodson's other work, Harley Quinn, Poison Ivy, Black Cat... All pinup girls. All the same body type, all the same face. Another cheesecake artist on Wonder Woman. Same old objectification and disrespect, shameless pandering to adolescent boys, and "sex sells" mentality. Seeing the cover in June's solicits relieved some of my fears. I was aware now that he could draw a different body type. But still, the poses, the potential for disrespect, the possible clothing... There was so much that could go wrong.

So when Melchior linked to the Terry Doson interview on Newsarama, I waited until I was ready to read his post and the interview. Of course, I went through and looked at the preview pages first. 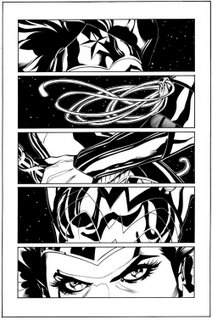 May I draw your attention to the fourth panel? Here, let me isolate it.

Did you recognize those breasts?

Well, I'm not surprised, seeing as they are actually covered by the Wonder Woman emblem for once.

I daresay we can set our anxieties aside for now.
Posted by Ragnell at 6:52 AM