All right, who did this? 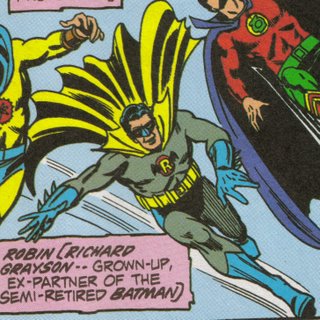 Who put that poor confused boy in a gray body suit and then gave him a yellow cape?

Dick Dillon was the penciller, but I'm not sure he's responsible for the design.

Was it Kirby? It was a crime what Kirby did to Sandman. Did he do this to Robin?

Or maybe Wally Wood. I think the guy who'd take DC's personification of seventies feminism and put a huge hole in the chest of her costume in her character design is capable of anything.

Neal Adams was the cover artist here. I saw the atrocity he put the Earth-1 Robin in, I wouldn't put this past him.

Whoever did it, it was cruel beyond measure and they should be ashamed of themselves.
Posted by Ragnell at 10:44 PM