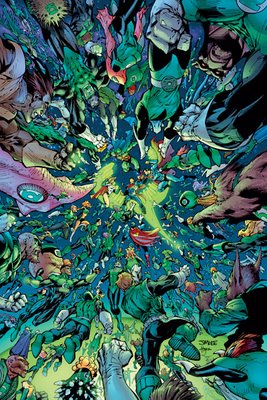 Why yes, I did get the Jim Lee cover.

Aside from the obvious goodies featured in this cover (Mmmm... Green Lantern Uniform Pants...), I want you to note 3 things here.

Hmm... Shaped like and Hourglass, Bare Midriff, what appears to be Breasts... That looks like a woman.

Holy Cats! They let wimmens in the Green Lantern Corps? Who knew?

Seriously, I was a little disappointed at the end of Green Lantern Corps: Recharge Remember that big spread with everyone in the Corps by the Central Power Battery on it, the one that had Elvis?

I looked carefully. There were three females -- Brik, Soranik, and this unidentified woman.

And I can hear it now. But Raaaaagnuuulll, they're aaaaaliens! They won't have the same sex characteristics as humans. A lot of those people could be female, and you just can't see it.

Okay, well, then, explain Brik. Brik is a rock-type person, from one of two stone-races on the planet Dryad. She is not an animal, she is a mineral. See the blocky shape and the gray coloring. That is how the artist indicates this.

So why the hell does she have breasts?

Easy, so that we know that she's a female.

You see, in our society, for reasons that remain a mystery to me, males are considered the default. If you see a person who is not obviously female (Breasts, Long Hair, Hourglass Shape, Pink Accessories of some sort are various ways of indicating this) then they are assumed to be male. In a book like Green Lantern Corps, where there is an unnamed background cast of 7200, all you have to go on is visual clues is for most of them. Even being generous, and not making assumptions, there's still a number of humanoid races. These can be obviously male or obviously female. In my experience, most have been obviously male. Male is likely the default to the writers and artists, otherwise why bother to give a rock creature a D-Cup Rack to emphasize her femininity?

This gives us three gender options when looking at the background of Green Lantern stories. 1) Male-Shaped, 2) Female-Shaped, and 3) Funky Alien-Shaped (Assumed to be Male by Default).

I got into a big argument on Comic-Bloc about this one. (And I remember who with this time, his name is associated with Hector Hammond, prison, and showers) All I said was "I'm disappointed we didn't get more new female Green Lanterns during Recharge." I mean, that's an opinion. How can you argue an opinion? I should have known better with Green Lantern fans. We can argue about anything. 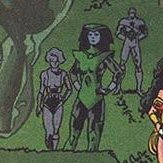 It didn't get violent, to our credit. But we did end up listing all of the new Green Lanterns who had lines in the miniseries and the regular series. All of the returned vets. All of the projected returning vets in the upcoming Green Lantern arc (that starts this month). And then working out the ratios. We decided that the Golden Age magic Lanterns shouldn't count. We came up with 5 to 20, a 1:4 ratio, which we estimated to be near what the active duty military gender ratio is. Still, I figure, with Green Lantern, where the concept is warriors chosen specifically on strength of will, the gender ratio should be closer to 1:1, which led to the actual argument. Hammond's bath-giver told me I was putting my hopes too high and we'd never see that. He seemed to find this unreasonable. I didn't. Eventually we started talking about Raker or G'nort and peace came to the Green Lantern chatroom once again.

It weighed on my mind afterwards, so I decided to re-tally it. Going by speaking parts and named people.

So, why did I feel a need to do this? Well, because of the crowdscenes in GLC: Recharge. Aside from the two named Females (Soranik and Brik), I saw two other apparent females in the crowdscenes. 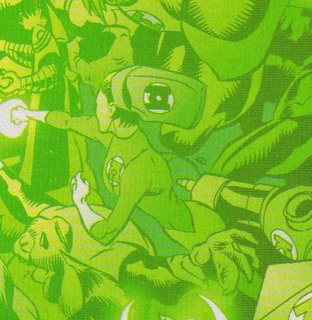 The rest were all either Male-Shaped or Funky-Alien Shaped and therefore assumed as male by default. It must be the default again, because why else give Brik Bouncy Breasts?

In light of the recent Green Lantern resurrections (Hal, Kilowog), and who had not been resurrected (Katma, Arisia), these background problems jumped out at me. Green Lantern is my favorite franchise you see, and I found it immensely annoying when the only prominent female is there not because she is chosen (like virtually every male character there, now that Johns has retconned out the randomness) for her courage and honesty, but because she was born into the business. In fact, because the heroes in this book are specifically chosen for courage and honesty, I think its even more important to have visible female characters here than in other superhero franchises. All men and no women in this mess sends me a message I am sick of hearing. 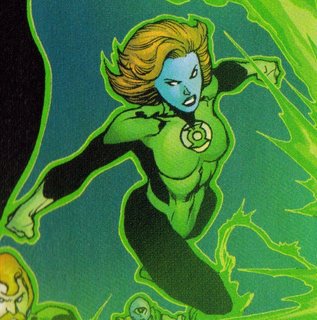 This was downright annoying me until I read Infinite Crisis #7 today. From the point where I saw the Lady pictured above, this issue could do no wrong. Inside the issue, when they have the first panel showing the Corps, there are at least four very obviously female characters there. There's more as the book continues. Quite a few, actually. Enough that I still don't feel the need to count and figure out the percentages (maybe later).

Even now, I find myself incapable of giving an objective review, overwhelmed by the pure joy of finally seeing some gender-diversity in my favorite franchise.

Even if background characters are cannon-fodder, it's still pretty damned cool to see a decent number of women there.
Posted by Ragnell at 11:32 AM