Got a Laugh Out of This

I read Supergirl #6 and one of my hopes was dashed. The 16-year-old girl is still being heavily sexualized.

To think those cover costumes had given me heart.

However, the art is much more reasonable -- if still cheesecakey -- and the writing is infinitely better now. We're not universally expected to like her, but to understand that she's a hotheaded teenager and that's not a positive trait. As such, I like her a lot better. Rucka does indeed have skill.

And I did get a laugh from this issue.

You know how, even when the solicits have revealed something like a mystery identity or someone's death months in advance they still treat it as a surprise in the actual book? So, even when we know who Nightwing (Wow, yet another Nightwing in the DCU!) in Kandor is, they'll still have a big reveal where she shows up, is mysteriously clad in the uniform for a page or two and her identity is then revealed in a surprise manner.

Which we got, below: 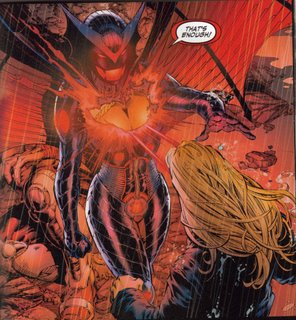 Did you recognize those breasts?

A full page before they show her face, and it serves to identify Power Girl.

I laughed for ten minutes.
Posted by Ragnell at 4:19 AM