Doomed Before the First Issue Shipped

While I was away, Kalinara had some ideas for redeeming Jade (and I have to say I liked some fo them. The conversation really got fun in the comments when they started to reimagine her as a Fairy-Tale Princess Adventurer. After reading it, I'm still not fond of her personality, but I will admit to wanting a Green Barbie now.

Anyway, a few weeks ago I found something on Fortress of Fortitude (finally found the original post, I'd mixed it up with another blog wtih a similar template) that convinced me that Jade was doomed from conception. I don't even mean the mother/daughter symbolism I'm always harping on. No, I mean the very attitude that DC had when they first marketed spelled "Weak Character." 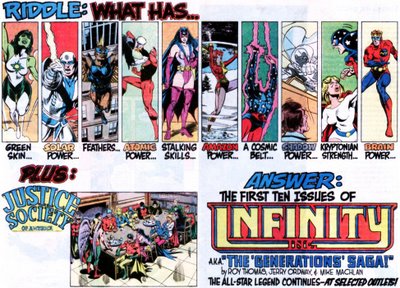 Please note how everyone else is notable because of their really cool and useful powers or talents, and Jade is notable for "Green Skin."

If Brainiac 5 or another Coluan character were featured in an ad like this, we all know it would say "Super Intelligence" or something like that.

If Alan Scott, or Hal Jordan, or John or Guy or Kyle or Katman or Kilowog or freaking Saakk were in this, it would say "Power Ring" or something referring to the energy.

If She-Hulk, the goddess of cheesecake, were a DC character and she were featured in this ad, it would say something about her enhanced strength or toughness.

But since it's Jade, it says "Green Skin."

I'd feel bad for her, if she hadn't made a habit of wasting the coolest powers known to comicdom.
Posted by Ragnell at 7:32 AM