Green Lantern fans have a reputation for rabidity. The infamous Hal Jordan fans vs. Kyle Rayner fans feud raged for well over a decade. The writer of the issues where Kyle replaced Hal recieved death threats and still gets regularly trashed by the most extreme readers. The writer who wrote Rebirth gets similarly trashed by Kyle fans now. Before Hal came back, we had little Kyle fan vs. John Stewart fan fights on message boards and even now, with three series and five major Lanterns there's still little skirmishes on the internet.

Why? What inspires such fierce fan loyalty?

It's really very simple actually. Green Lanterns are like us.

And I don't mean regular-joe type characters. The traditional appeal where the fans viacariously get the power of instant wish fulfillment. No, that's obvious.

They are like us because each one, no matter the species or gender, is a geek, a dweeb, or a nerd.

Kyle's dweebiosity is well documented every Wednesday on Seven Hells.

Guy Gardner broke up with a girl over an argument about 2001: A Space Odyssey.

John Stewart reputedly listens to Abba and Barabara Streisand. I've never seen this, but multiple people have stated it so I'll take their word for it. He's also an architect, which is a reasonably nerdy job.

In her first appearance, Katma Tui built a machine specifically to measure the amount of love she felt for her boyfriend before she accepted his marriage proposal.

And then, there's Hal Jordan. Hal's test pilot on fight jets, he has no trouble getting an overnight dance partner when his girlfriend turns into a naughty supervillainess, he gets to just punch out whoever disagrees with him without every getting assault charges or a broken wrist. Hal was never a dweeb, right? 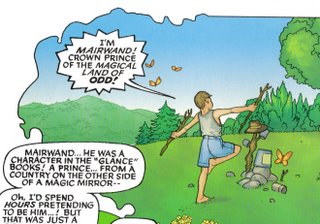