Why is No One Discussing This?

Sleep is For Suckers has the Infinite Crisis #4 Review up.

Now, I'm too lazy to read Didio's Crisis Counseling Interviews for myself, but luckily my fellow bloggers sum up the important stuff.

So, I'm surprised, no one has commented on this particular bomb:

And, a bit later, something I quite appreciated reading:

?: Will the Crisis have any major effects on the Starman legacy? Or on Opal City? Now that you have "terminated" Black Condor (in a rather disrespectful way, I must say), that city is without a hero.

DD: That’s a question only James Robinson can answer.

Yes, there's more to this.

Now, when I read that, I needed to give it a moment to sink in.

I mean, could that possibly mean what I think it means?

It's mildly possible Didio is just referring to Robinson as the Opal City expert, being the last writer to extensively use the city.

But it's a much better possibility that, given the the fact that Robinson is writing Batman's first OYL story-arc, that after he's finished there we'll get to see him dust off his old supporting cast a bit and show us what's going on in Opal City.

Maybe we'll get an Elongated Man miniseries. I'm not much of a Ralph fan, but Robinson handled him nicely before.

Better than that, maybe we'll get a Shade mini-series.

Or a Gotham Central-style police series based around the O'Dares. A little CSI-style stuff with Hamilton Drew as a consultant would be fun. I do want to see the Opal City Crimelab try and examine some of the Shade's shadow stuff again.

Maybe some other new hero or heroine will take up residence there. Shining Knight or Booster Gold would both work very well there, as Opal City has such a large time-lost population since the Post Demon storyline. I always figured it would attract more time-lost people, for the comfort of knowing other people in a similar situation.

Maybe Courtney will go to college at Opal University. She's got a healthy enough respect for the Starman legacy that she might consider that city ideal for striking it out on her own. I could see her doing it to honor a request of Jack's, or even the Shade's.

Maybe we'll get a brand-new Starman. Or one of the future ones hinted at before, like Danny Blaine. He needs a different costume, though. Hate that full-face mask. Only villains should have them. 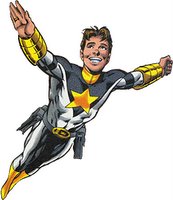 Maybe we'll get a Starboy. We do have a spare, after all. The white edition has been floating aimlessly around the timestream since the reboot. And we also have option of bringing the black version back from some ambiguous future in the current Legion timeline, y'know, like they're planning with Supergirl and they did with Superboy before the reboot.
The Shade can set him up with a place to stay. Hell, Shade could tell everyone this is his long-lost son or grandson. Everyone would probably accept the kid without question. He's Opal's oldest living citizen, and no one knows where he lives. He could have a number of wives and kids scattered throughout the city, for all they know.

If nothing else, I get to add to my DC Comics Wishlist. I'm hoping to get a combination of the above. I'd love to see a time-lost hero from the future team up with a time-lost hero from the past. Or the Shade working with Hope O'Dare. Or just Hope and Clarence and Mason O'Dare, because they haven't even gotten cameos. Or be able to see Thom Kallor on a regular basis again I ended up dropping the LSH book, as the reboot's not to my taste, which is a shame because Starboy's new costume with the cape looks pretty sweet. I swear, if you had said white pants and cape with a starfield shirt I wouldn't made a face, but actually seeing it it really works.