If anyone's looking for a fight, I'm up for it. 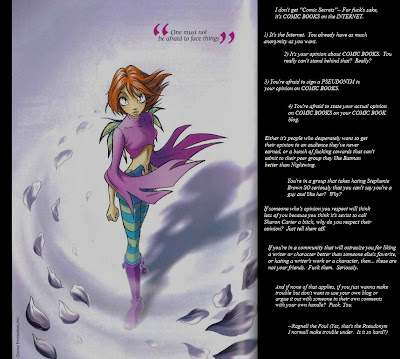 So much of female comics fandom has migrated from livejournal to Tumblr, which is a service which makes it damned near impossible to anonymously troll someone because the basic conversation revolves around reblogging and posting your statements on your own blog, and they reply on theirs unless they have a special plug-in. Like cloned dinosaurs and challenged misogynists, the Trolls will always find a way, and items from that troll-fallen tumblr account keep making their way via reblogs to my own dashboard. I know one person who's been trolled at least three times this week from there.

In the meantime, there's stuff that doesn't seem so much like trouble-making as it just seems like someone is scared to be the one person in their circle who doesn't agree with the rest, but does want to see if there's a circle where their opinion is the dominant one. It seems very... weak-willed, perhaps?

Either way, I find the whole thing disgusting and made the above image for an email joke. The text is small, but I had a lot to say. And now that I can no longer ruin Christmas, it's the best time vent in public: with my Fan ID attached, on my own blog, in my own space on the internet, where anyone who wants a fight can come get one.
Posted by Ragnell at 7:51 PM