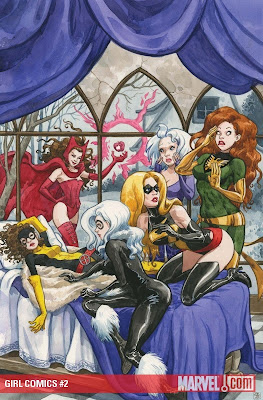 This was my personal favorite cover from 2010. It's got 3 of my favorites and that fairy tale motif I love. I know some people don't like it because Wanda's in the wicked witch role in the back, but part of the appeal for me with Wanda is that she's the Fairy Tale Witch as a good guy. Since I was a kid I've had a fascination with the Witch archetype on either side of the moral divide, but especially as good guys. (And as cover artist Jill Thompson also created Scary Godmother, it's safe to say I'm not alone in that fascination.) For some reason, I just want it to turn out to be a misunderstanding, and for the fairy tale heroine to get trained as a witch after befriending her. Wanda's history is that of a fairy tale heroine (she and Pietro are very Hansel and Gretel and the Brother and the Sister to me) and her powers are that of a fairy tale witch. She's ideal for exploring feminine roles in fairy tales, as well as the overlap between folklore and modern superheroes.
Posted by Ragnell at 7:36 PM