This comic taught me something very important about the Phantom Lady.

She is made entirely of plastic. 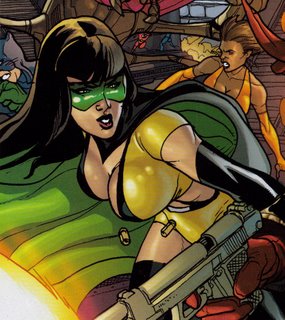 I wouldn't have been looking at it if not for Kalinara's post (my problem with Phantom Lady is not her cup size or the lighting, but the hideous and improbable pose she struck in the Brave New World Preview Art -- Yes, there is something for everyone to hate in that picture!), but there it is, the explanation for all of our woes. Plastic. As a plot point.

The Wizard: Basic Training scans don't completely shoot down this theory. I saw them in the magazine when I was a teenager and tried to learn to draw from them. They've been drawing off that advice for years and while they've produced some truly, truly awful parodies of the female form, there's rarely been something quite this bad.

And it's hard to believe that this is owed entirely to lack of talent of the designer, because the above image was drawn by an artist with a different style and a different inker, in a different book.

As much as we may hate to admit it, Phantom Lady could very, very easily be on purpose.

The option is intriguing. Not nearly intriguing enough for me to pick up Freedom Fighters and brave Acuna's faux-to-realistic art, but intriguing nonetheless. The whole senator's daughter thing could just be a good cover, and she's actually a plastic android built by Ivo, Morrow, or Magnus, and therefore sentient. That would be pretty cool.

Speaking of pretty, though, on the very same page of the very issue, we see Green Lantern: 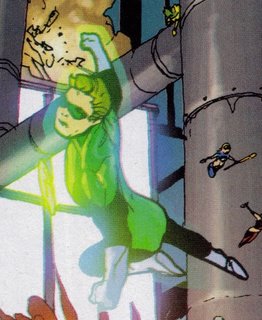 I am not imagining this.

That character is posed so that we see both his butt and his face.

I'm prepared to throw out all previous theories. This can't be some attempt at equal objectification. There's no way its actually a running in-joke at DC over the last 45 years. And there is absolutely no chance that this is an accident.

Hal Jordan is purposefully trying to moon us.

He is consciously aware that he is being read, and he's been mooning us. There's no other explanation. And whoever told him, told the other Lanterns. They know too, that is how they always position themselves in such a way as to display their rumps. Collectively, the Green Lantern Corps has been breaking the Fourth Wall just to show us their hindquarters.

I'm sorry to end this post on such an abrupt and awe-inspiring revelation, but I think I need to sit down after this one.