Well, this is a extremely spoilerish observation from Green Lantern #12, and I'm worried about messing up the surprise. I went back and changed the site feed to "Short" so I could post this and not mess anyone up, but I'm still paranoid so here's an Iconic View of Hal Jordan to make some space on the page. 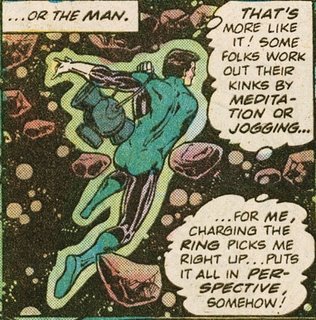 Now, let's get down to brass tracks.

Readers, this is Arisia: 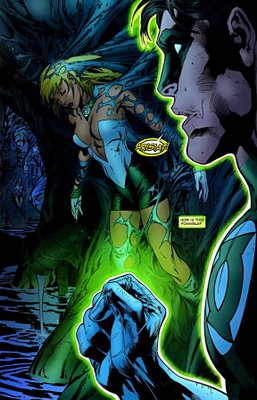 Now, the short version of her unfortunate history is that she was a teenaged girl in the Green Lantern Corp who had a crush on Hot-Shot Hal Jordan. She was 14 in Earth years, but 28 in her homeworld's years. Hal wanted nothing to do with her romantically, she looked 14. So, she uses her ring to age herself so that she appears to be 28, as humans see it, and tells everyone she had a growth spurt. (I think Katma Tui raised an eyebrow at this, but the CPB AI thingy that the GLs used was down at that point so no one could check.) After a complicated story with her chasing after him and annoying him, and some mind control, and some general GL weirdness that brought them closer, Hal has the supreme lapse of judgment that accepts her advances.

Here's where things get fuzzy, because up to the point that Englehart wrote her, she acted like a teenager. As far as I could tell, under Englehart, she acted and thought like a 28 year old. He has been quoted in interviews as writing the story as a way of making the point that physical appearance doesn't matter, but it still sounds skeevy. Either way, this is the history they had to work with, and work with it they did. Arisia stayed artificially aged (which is something I think should have put her on the fridge list, because losing your childhood for a guy and never getting it back is an injury) until she died.

When Englehart left, most of them lost their powers and only Hal had a ring. Englehart had pretty much written her as an adult woman once she aged. Under Priest in Action Comics Weekly Arisia was the main love interest, and she was pretty much an airheaded sex toy (not that anyone acted like they had a brain in Priest's run) because she had no powers and apparently no sense. Jones brought back the Corps, but left Arisia powerless -- citing her use of the ring to age herself -- and established that mentally she was still 14. Then she got moved over to Warrior and Beau Smith made her into an extremely cool character before killing her. However, he laid the seeds for a resurrection by spending time during the series to point out her remarkable healing abilities (such as healing a broken spinal column in one week).

Now, I haven't read all the issues, but I love and hate the concept of this story. I love it because this is what a teenager would do. They would age themselves to get their crush. I love how Arisia behaved. 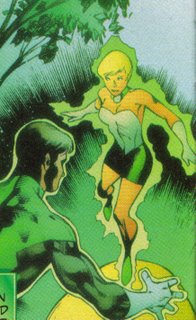 I despise how Hal behaved. He should have known better. He should never have come near her, not even Aliens do that overnight. I also hate the writer for doing this story and portraying it as though there isn't anything wrong about it. The only thing that saves Hal in my mind is that he was completely, and utterly, unattracted to her until she looked like she was approaching 30. That pretty much proves he's sexually attracted to a mature woman. But still -- He slept with a teenaged sidekick. That's fucked up.

If I had a chance, I would keep it, only I'd retcon it so Arisia was unnoticed as a teenager by Hal, and he didn't know that the artificially aged Arisia who approached him was the same as that teenaged elf person who used to follow Tomar Re and Katma Tui around on Oa. Granted, some people would tell me that puts a lot of wrongdoing on Arisia while taking the weight off of Hal's shoulders, except for the difference in behavior. How Arisia behaved, while very wrong, was acceptable as she was a teenager. How Hal behaved, while often defended by his fans, was unacceptable. He was the adult, he knew this.

Anyway, what I noticed was when I saw the above panel was the costume. Take a look again.

Yes, I saw the boobs. Stop looking at the boobs for a minute and think critically with me. Earlier in the story, Hal has a flashback that ends with seeing Arisia. Here are the pictures of that flashback.

On careful inspection, those gloves look too small. Take a look at the fingers, those fingers are a bit too small for the hands. Unless, of course, there are fingers beneath the cloth of the rest of the glove. And while he drew opera length gloves in the earlier flashbacks, in this picture Ivan Reis draws a cuff. A cuff that is practically on her palms.

This is an energy costume, it should fit like, well, a glove! Unless of course, she's been in stasis for a while yet has been growing all that time. Her hair has clearly gotten some length, because even in Warrior she was always shown with a pixie cut. And if she outgrew her clothing, it'd be easier for the Manhunters to just unzip or cut the front rather than sneak into her head and control her to the point she changes her costume. Especially given Arisia's will. She was the youngest member of the Corps (maturity wise she was the only Juvenile, I don't mean actual chronological age, there are likely some species that reach old age at a decade in Earth years). She's shaken off Hector Hammond, then gone on to kick his and Star Sapphire's ass. In this story she reached through whatever the Manhunters are using to keep her in stasis, through whatever they were using to put Hal through Flashback Nightmare Hell and helped Hal take control again.

Now, it comes to the why, and what the implications are. We got two narrative boxes of information on Arisia, along with some dialogue telling Hal to forgive himself because she's forgiven him. 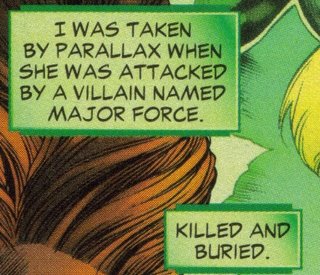 So we know that Beau Smith's death story is still in continuity.

We don't know what else is. Arisia came up in the flashbacks right after Hal was kicking himself for leaving Carol because of commitment issues. So, the romance could still be intact. But, he never specifically mentions that he dated her, and when he finds her later in the issue he connects his flashback of her with the idea that she was seeking him out (which is as good as true, given Hal's horrible track record with mind control).

So, I'm seeing some options here, and they aren't all good.

1) History as told is totally intact, and I'm misreading the art.

2) History as told is totally intact, and Arisia reverted to the physical age of 14 after she was revived by the Manhunters -- whatever they did to imprison her and tap her ring caused this. She's been growing since.

3) History as told is intact up until she loses her ring, then she reverts to 14.

4) She never artificially aged, and the romance never happened.

5) She never artificially aged, but the romance did happen.